Disclaimer: I can’t speak for people of color and I don’t pretend to. But the recent critiques of Critical Race Theory have annoyed me to the point that, even though I am not directly affected by it, I cannot stay silent regarding the logical fallacies and illogical fault-finding with CRT. Here are my thoughts. I speak only for myself from my observations.

I’ve read “Critical Race Theory: Seven Hard Truths” by Robert B. Charles. His bio on the AMAC website, where this commentary is published, shows his pedigree, as expected, as a lawyer and under the racist Reagan and Bush 41 White Houses. I tried to give his thoughts the benefit of the doubt. You will recall Bush 41 used the infamous, racist “Willie Horton” ad to defeat Michael Dukakis for the presidency in 1988 and escalated a racist drug war; that Reagan referred to black people as “those monkeys from those African countries” and poor people in Chicago as “welfare queens.” I’m sure that makes him well qualified to write about race. 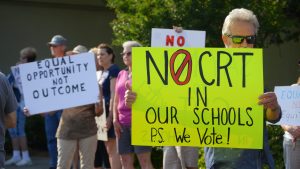 First to definitions. You might think this is a distinction without a difference, unless you have grown up with the difference, but we must make a distinction between “racism,” as I understand it, and simple “bigotry.” Racism is prejudice of one race against another race, but based not just on race but on relative power: if two races have unequal power, presently and historically, only one race is even capable of racism. Black people, in this sense, cannot be racist, because they have no social structure from which to manifest such power over white people.

If you cannot accept this distinction between racism and bigotry, then we can instead talk about individual racism vs. structural racism. This distinction is essential because conservatives, among whom I count Mr. Charles, typically conflate the two. They are not the same. Individual racism, which I call bigotry, can be seen in the actions of any group: racial, ethnic, social, economic, et al. Structural racism is seen not so much in behavior as in environment. When peaceful Black Lives Matters protesters, asking only that black people not be targeted by police, instead get beaten and jailed by police – while at the same time white supremacist militias, even armed ones, are given a pass; when unarmed black people are shot dead (and the white police officers pulling the trigger are let off easily), but white people, even armed ones, in the same situation, are gingerly taken into custody, that is structural racism.

Since the subject of this commentary is Critical Race Theory (CRT), it seems strange that Mr. Charles nowhere defines what exactly CRT is, cites no authority on what CRT says, or where exactly CRT is being taught (it is not part of public school curriculum, but only taught in college, if at all). It’s almost as if he doesn’t trust his readers to come to the same “hard truths” he does after examining the sources. Simply put, Critical Race Theory holds that the law and legal institutions, particularly in the United States, are inherently racist insofar as they function to create and maintain social, economic, and political inequalities between whites and nonwhites, especially African Americans. CRT argues that the law and legal institutions, whether accidentally or on purpose, serve the interests of the wealthy and powerful at the expense of the poor and marginalized. CRT observes that racism in American society is normal, not aberrational.

Mr. Charles uses inflammatory, warlike rhetoric such as “America is under fire” (as if there had been no racism before CRT) and “incite race warfare” (as if white people have not been “warring” against black people for over three centuries). This tone is designed to rile his readers. But his rhetoric does not illuminate any critical issues with CRT. I’d like to address these supposedly “hard truths” individually.

1. America is about individual equality, not group equity.

Even if this were true, it wouldn’t describe any America I have seen. If we all supposedly have the same rights under law, but the law fails to recognize historical differences in the treatment of certain groups, of course you must consider group equity! Otherwise, how do you explain wheelchair ramps and closed captioning? Why was it necessary, after a hundred years of systemic racism against black people, to pass the Civil Rights Act and the Voting Rights Act? Without putting group equity into the law of the land, individual equality is a myth, an aspiration never to be realized.

2. Equal opportunity is not an equal outcome.

This is what I call the myth of meritocracy. The myth says that the harder you work, the further you go in life. In an ideal world, this would be true. But it is not a fact of life for marginalized people: success comes from opportunities; opportunities come from wealth and connections. If, of the top 5% of wealthy people, we find that 88% are white, does that say that black people don’t work hard – or that white people are endowed by the system with opportunities and connections enabling them to create and maintain wealth, especially intergenerational wealth, and social status? If meritocracy were real, women would earn equal wages to men, and black people would be hired at the same rate, at the same salaries, for the same jobs, as white people. This is clearly not true. To make his case, Mr. Charles ignores the lived experience of minorities.

As Anatole France said, with tongue firmly in cheek, “The law in its majestic impartiality forbids both the rich and poor alike to sleep under bridges, to beg in the streets, or to steal bread.” 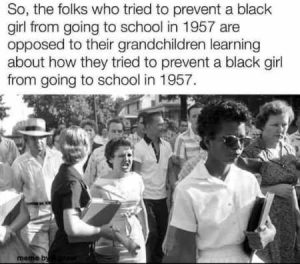 3. CRT is itself racist.

I’ve already detailed my definition of racism. But even by the popular definition of racism, which maintains that one race is superior to another race, Mr. Charles simply repeats his myth of meritocracy. He uses the tired term “reverse racism” as if it were a real thing. But reverse racism is not the cry of an oppressed group: black people don’t get to define the terms of white existence, they can’t limit opportunities for white people, and they have no institutional power over white people. Reverse racism just isn’t a thing.

Mr. Charles again dips into the bottomless well of the myth of meritocracy. He mentions Colin Powell as if he were typical of black success (I’m surprised he didn’t mention Oprah), while in the same paragraph taking a swipe at Marx. I’m not sure where Marx mentioned black people, but no matter. That individuals have triumphed against racist obstacles does not end all debate about a society’s degree of fairness. Imagine, on the other hand, how many more Colin Powells there might have been if they had not had to overcome structural racism. As James Baldwin sagely said, “the inequalities suffered by the many are in no way justified by the rise of a few.” It is easy to point to success stories in entertainment, sports and politics. But it is more difficult to overcome the “old-boy networks” in the corporate and academic worlds, where it’s mostly white males who determine who “fits in” with the prevailing corporate/academic culture. And the black people who break through the white ceiling are typically those who don’t make white people feel uncomfortable. More about discomfort later.

White society rewards black people only if they are team players like Colin Powell (or Condoleezza Rice or Michael Jordan), who cater to white superiors. Furthermore, white people will vote for black politicians on occasion, such as Barack Obama, but only if that black person makes them feel comfortable. On the other hand, a white politician who takes racially controversial stances, such as favoring voter suppression (another exercise of white supremacy), have no trouble getting elected while making black people uncomfortable, even disenfranchised. If you start the competition encumbered with 245 years of slavery and decades of discriminatory social and economic policies and practices, can you really call opportunity equal? To sum up: until success stories such as Powell or Oprah or Obama become so common that we can no longer name all the power brokers of color, they are simply reminders that these are outliers, not examples of upward mobility in a colorblind society.

The idea that it is “fundamentally immoral” to make “successors responsible for ancestors” again ignores history and reality. White people are living off the fruits of generational white supremacy. The typical white family has eleven times the net worth of the typical black family, and eight times the net worth of the typical Latino family. This is thanks to past and present barriers to wealth accumulation, such as home ownership, the principal means of intergenerational wealth accumulation in the USA (redlining, steering, blockbusting, and legal discrimination by HUD in its early years). This goes beyond statistically demonstrated impediments to black success: less school funding, more college debt, less home ownership, fewer job opportunities, harsher punishment for crime, etc.

Contrary to the quote from Ezekiel, yes, the child should not share the guilt of the parent – but only if he no longer, and to this day, profits from the sins (systemic advantages) of the parent. This goes beyond the continuation of slavery inherent in the 13th Amendment to the US Constitution, which allows involuntary servitude “as a punishment for crime whereof the party shall have been duly convicted.” It is no accident that black Americans receive harsher punishments than whites for the same crimes; black children are 18 times more likely to be sentenced as adults; black people represent 40% of the total prison population, despite being 13% of the general population; and, because of higher incarceration rates, 7.4% of black American men are disenfranchised (unable to vote). I defy anybody to make the case that this is for any other reason than advantage, claimed by white people who write and enforce the laws.

Mr. Charles doesn’t expand on this point aside from taking another swipe at Marxism, which is a reliable right-wing bogeyman, incompletely understood. He fails to say where this “mass persecution” he fears may come from. I mean, if black people in the USA ever achieve equality with white people, or majority over white people, what’s the problem? It’s not as if minorities are discriminated against in this country, right? Right? 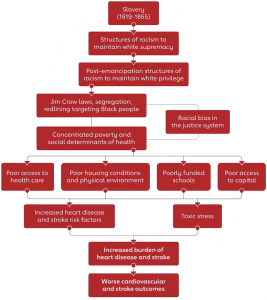 Mr. Charles saved his grandest “howler” for last. If CRT really ignored data, Mr. Charles would not have ignored the following data: Predominantly black school districts receive far less financial funding than white school districts; black college students are more likely to go into debt to pay for college; black Americans with college degrees are twice as likely to be unemployed; the median wealth of black college graduates is $23,400 vs $180,500 for white college graduates; 27% of black Americans live in poverty, compared to 9.9% of whites.

Black Americans represent 40% of the homeless population despite only being 13% of the general population; housing lenders have disproportionately steered Black Americans to subprime housing loans, even when they were qualified for prime loans; only 43% of black householders own their home vs 72% of white householders.

But I’m sure all this is because black people don’t work as hard as white people. It can’t be a legacy of systemic racism. And Critical Race Theory is just a conspiracy to make white people uncomfortable.

What happens beyond death? Nichols says, "'ve just always assumed that everything just sort-of stops. You know, I'm not one of the people who imagines heaven and hell and so forth."