At no additional charge, I have corrected the spelling and punctuation in this meme: “According to the left, Emma González’s [Cuban flag] patch has everything to do with heritage and nothing to do [with] the fact [that] Cuba is controlled by murderous Communists. Just as this [Confederate flag patch] has to do with heritage, too, right? Wait… That’s right, you said it [the Confederate flag] had to do with hate and racism, not heritage. Funny how that works.”

As a cocktail of racism, history and politics, there is a whole lot to correct here! 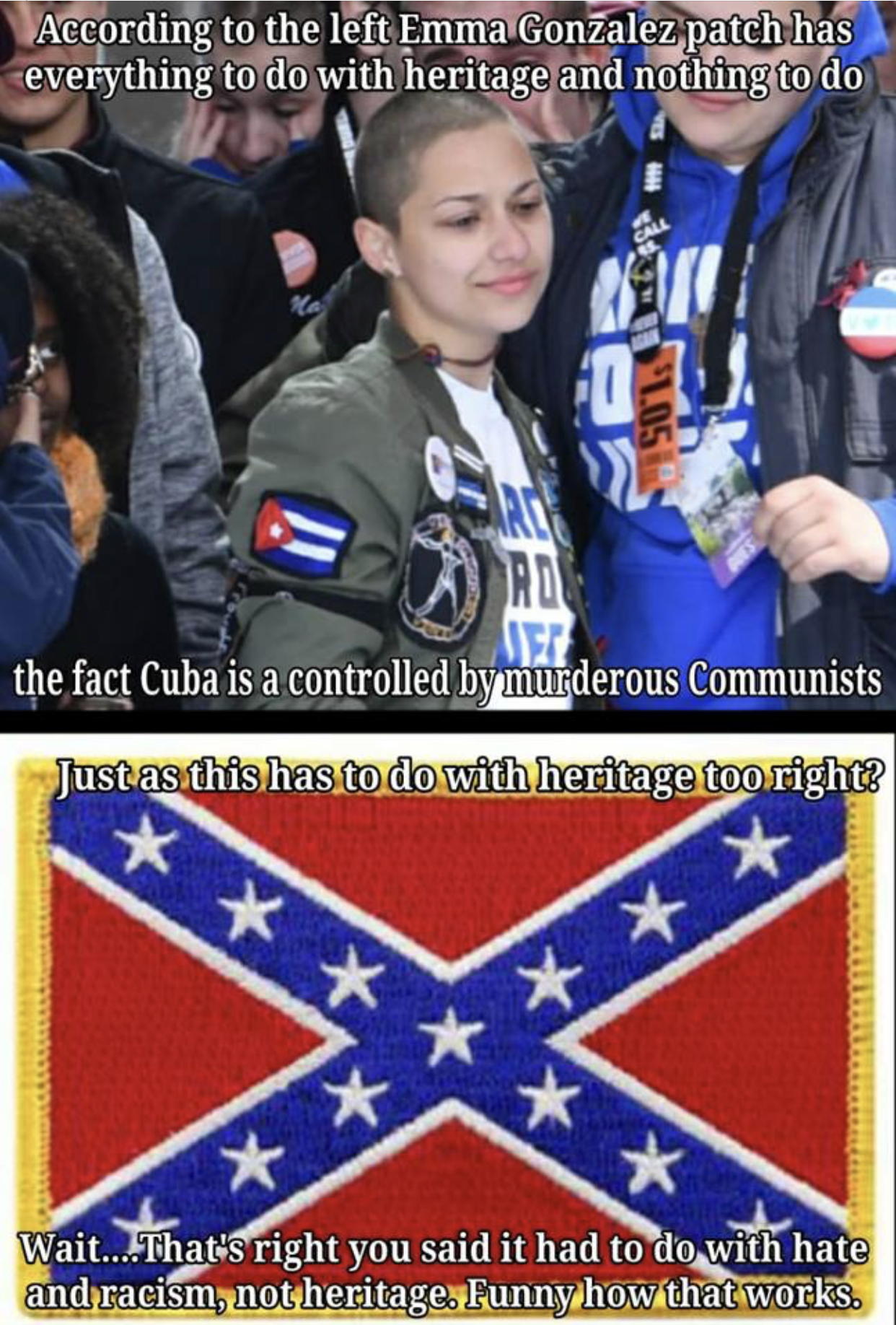 First, who is this “left” and by what means did they tell everybody that the Cuban flag patch worn during the March for Our Lives on 3/24/18 by Parkland shooting survivor Emma González means support for Cuban communism? To quote the Miami New Times, “When Fidel Castro died in 2016, thousands of Cuban immigrants and their descendants paraded through Miami’s streets waving the Cuban flag. ... It would be laughable to suggest that any of these Cuban-flag-wavers supported Cuban communism.”

The commie-shaming actually began with an unhinged Facebook meme from Iowa Rep. Steve King—who keeps a Confederate flag on his desk, presumably to remind himself that his state supported the Union during the American Civil War. King’s meme said, “This is how you look when you claim Cuban heritage yet don’t speak Spanish and ignore the fact that your ancestors fled the island when the dictatorship turned Cuba into a prison camp, after removing all weapons from its citizens; hence their right to self defense.” (King’s history of private gun ownership in the Cuban Revolution is a little shaky here, but that’s a subject for another day.)

Second, Emma González is of Cuban descent: her father fled to the USA from Fidel Castro’s Cuba. But the Cuban flag was adopted by the then-Republic of Cuba a full 57 years before Castro’s revolution succeeded in overthrowing the island’s US-backed, capitalist rulers. To be clear, Cuban exiles love the Cuban flag. Indeed, the Bay of Pigs Veterans Association, the ultraconservative group the CIA paid to attack Castro in 1961 (and who endorsed Donald Trump in the 2016 election), still sells t-shirts, hats, mugs, and key chains decorated with the Cuban flag. I don’t think you can accurately describe them as commie-lovers!

One last note regarding Cuba: When did the USA have a war against that Caribbean Republic? I’ll explain the relevance of that question anon.

Third, as for the confederate flag, it is a tiresome right-wing trope that the “Southern Cross” flag stands for “heritage, not hate,” a concept which dates only to the 1990s. It’s the same idea as the equally false but much older notion that the Civil War was fought over state’s rights, not slavery. The facts of both cases say otherwise (You can find a short history here).

As if anybody but Confederate flag-wavers needed a reminder, the South lost the Civil War. In what other context does the loser of a war still get to display its favorite flag openly? Do you think Germany allows Nazi flags? Or celebratory Nazi museums? Or Nazi battle re-enactments? Indeed, displaying the Confederate flag aligns its supporters with traitors who took up arms, against the country they now claim to love, in the defense of slavery. Displaying the Confederate flag is celebrating the defeat of a racist cause: the right to own another human being.

And slavery in 1860 was very profitable—for some. Percentages vary by state, but probably 66-75% of the southern population had no direct economic interest in the preservation of slavery: they were fighting (as most armies do to this day) for the interests of rich capitalists—the 25-33% who owned slaves. In the official declaration of the causes of their secession in December 1860, South Carolina’s delegates (for example) named “an increasing hostility on the part of the non-slaveholding States to the institution of slavery.” That was because the North was refusing to return fugitive slaves, as a matter of states’ rights, and the South opposed this exercise of states’ rights. They also decried that some states in New England allowed black men to vote and tolerated abolitionist societies.

The Confederate flag became a symbol of protest against civil rights and in support of Jim Crow segregation adopted by the so-called “Dixiecrat” Party. Over the years, the flag began to be adopted by the revived KKK in the late 1930s and 1940s. It has historically been used by white supremacists and unfamiliarity with its history is no excuse for its adoption as some kind of generalized “rebel” or “good-ol’ boy” symbol today. Black people growing up in the South never had any illusions as to what the Confederate flag represented (and represents).

To return to the thesis of Emma González and the Cuban flag: It is quite clear that the flag she wore on her sleeve represented her Cuban heritage, not any love for the current Cuban regime. Besides, when did Cuba ever make war on the USA? Considering the history of U.S. relations with our Caribbean neighbor, it would seem to be the other way around. And until the Congress decides to declare war on the Republic of Cuba, that Cuban nation is not officially an enemy. Emma González is entitled to wear its flag on her sleeve as an emblem of “heritage, not communism”; but the Confederate flag is, and always has been, an emblem of racist hate.

October 21: Religion and the Nobel Prizes

Alfred Nobel (1833) It was on this date, October 21, 1833, that Swedish chemist Alfred Bernhard Nobel was born in Stockholm. It is one of the ironies of his life that a man who made his fortune in the invention and manufacture of weapons of war – dynamite and other nitroglycerine derivatives – bequeathed among […]