Splitting the nation along blue-red lines – Didn’t we do that 160 years ago?

You asked for “3 or 5 sentences” on this article by Max Hastings, but it might take a few more than five sentences to address its points properly. First, I have to agree with Hastings that secession of certain states along red-blue ideological lines is possible, but not immediately likely. But political differences in this country are not so clear-cut. Second, we must not let our misleaders – our political misleaders but, more important, our opinion misleaders – feed us the poison of secession.

As I have said before, the red-blue divide in this country is an artificial one. The real divide is Top vs. Bottom, not Left vs. Right. In my opinion, it is useful for the media lapdogs of our oligarchs to wave the blood shirt of a supposed red-blue division in order to protect their wealth and their privilege. Mostly White Privilege.

Consider: If Jeff Bezos or Elon Musk or Bill Gates or Charles Koch or Warren Buffet or George Soros suddenly lost half their wealth, they would still be obscenely wealthy and powerful. If they can distract us, either with dark money political manipulation or self-serving philanthropy (which is political manipulation showing a kinder face), they stand to get even richer. And to what end? They could not spend it all if they lived 500 years!

Consider: If a monkey hoarded more bananas than it could eat, while most of the other monkeys starved, scientists would study that money to find out what is wrong with it. When humans do it (with money), they get a picture on the cover of Forbes or Man of the Year on the cover of Time! You can see why distraction is necessary.

Hastings claims red and blue Americans possess “radically different mutually exclusive conceptions of … the proper role of the state.” But are the people in red states really so different in beliefs from the people in blue states?

Consider what we agree on: cracking down on corporate crime, fraud and abuse against consumers, taxpayers and investors; opposition to the arbitrary erosion of privacy by the Patriot Act; the Federal Reserve’s out-of-control powers; unconstitutional wars; monopolistic practices against small business; corporate welfare subsidies; corporate tax havens, handouts, giveaways and bailouts; an abusive (or unavailable) banking system; politicians accepting bribes (or, rather, “campaign donations”) and doing exactly as their donors wish, even if it is the opposite of what their voters wish – and then taking a lobbyist job once they leave office; and corporate control of the media (and therefore the flow of information), so that our areas of convergence are never, ever, discussed!

What our misleaders would have us believe about ourselves: Black and Latinx people are crowding our border, taking our jobs and abusing or welfare system; religion is under attack; abortion is a crime against humanity; trans people should use the bathroom based on the sex they were assigned at birth; teaching the actual history of the USA is damaging to innocent children; gay/lesbian people are out to recruit your youngsters; Black and Latinx people are voting illegally; there are too many regulations and restraints on business that impede profits (like child labor laws, environmental protection laws, workplace safety and limits on the length of working day and working week?).

And, I’m sure, this line caught your eye: “Think of the Soviet Union, which splintered three decades ago, and which Russian President Vladimir Putin aspires to reassemble.” Further: “The Russians, through their online offensives, promote every form of disruption in the Western world, including tensions in the union.” This is what I call the Second Big Lie (the First being that Trump won the 2020 election). Add that to the hair-on-fire beliefs our misleaders would have us accept without evidence. 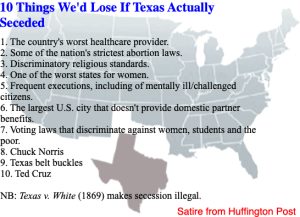 The American Empire is in decline, to be sure. But not because of foreign threats. Instead, our decline is in part from overextension but mostly because we forgot what we have a nation FOR. Hastings is correct that we failed to “finish the work of post-Civil War Reconstruction” because “at the heart of America’s divide is the issue of race, or white tribalism.” In an alternate reality, America would have embraced all races and bent our backs to the task of building a better us – a better US. But the oligarchs must keep us divided and powerless by telling us the “other” is our enemy, when we should know that they are our true enemies.

Final point: Hastings writes, “If the enthusiasts for Texit ever get their way, the U.S. will wave goodbye to 29 million people and the ninth-largest economy in the world, along with almost 40% of U.S. oil production and a quarter of its natural gas.” What he fails to mention is that a red-blue separation would be very bad for red states, who take more from the federal government in benefits than they contribute in taxes. And that, with the secession of California, the U.S. would wave goodbye to 39.5 million people and the fifth largest economy in the world – and that we really need to kick our addiction to death-dealing oil and natural gas, anyway.

Do I say Texas can stew it its own pollution? No. The borders of a state do not define the composition of its citizens. I still believe more unites us than divides us. The problem is what our misleaders would have us believe about ourselves vs. what we truly are.

Sorry. I couldn’t even fit that into 3 or 5 paragraphs!