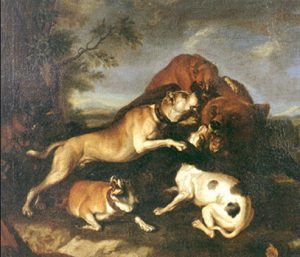 Bear-baiting is a blood sport involving the encouragement/force of a dog and chained bear [chained to a stake by the neck or leg] fighting (baiting). … Bear-baiting was very popular in Europe from the 12th until the 19th century. … As recently as 2010, illegal bear-baiting was practiced publicly in South Carolina. ~Wikipedia

Imagine, if you will, a powerful but paranoid nation, isolated on a continent with adjoining, putatively friendly, neighbors. Imagine further a hostile foreign power starts infiltrating those putatively friendly neighbors, converting friends there who will, maybe not do its bidding exactly, but will not resist its advances. Imagine further that a mere 100 miles from its border, this hostile foreign power starts building a launch site for nuclear weapons that could easily reach the “homeland” of this (imaginary) nation.

Do you think this (imaginary) powerful but paranoid nation might get a little worried about being surrounded by that hostile power?

If you think I’m describing the USA, the USSR and Cuba in 1962, that’s one possibility.

But this is 2022. Sixty years on, that powerful but paranoid nation is Russia, the successor to the USSR. Those neighbors are Hungary, Poland, Czech Republic, Bulgaria, Slovakia, Slovenia, Estonia, Latvia, Lithuania, Romania, Croatia, Albania, Montenegro, and North Macedonia – most of which were either client states or former Soviet republics – not to mention the (for now) Western-oriented guardian of the south end of the Black Sea, Turkey. That NATO base is in Estonia, 100 kilometers from the Russian border. That hostile foreign power is the US and its puppy, NATO.

U.S. Secretary of State James Baker promised Soviet leader Mikhail Gorbachev, on February 9, 1990, that NATO would enlarge “not one inch eastward” after the breakup of the Soviet Union and the reunification of Germany. But the promise was never part of a treaty, or reduced to a written commitment in any way, so the “North Atlantic” Treaty Organization was expanded eastward after all, well beyond the North Atlantic. Many predicted that NATO expansion would lead to war. Expansion was always intended, not for “defense” but to feed the ravenous appetites of war contractors worldwide, most of which rake in profits from the US government. Russia suggested joining NATO in 2000, but the aim was to undermine the organization, keeping the West from being overbearing, and the offer was declined. 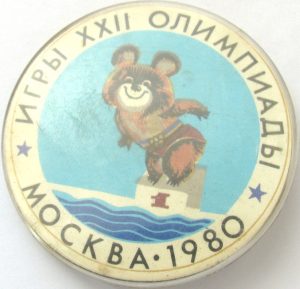 The Russian bear, assigned to the “big, brutal and clumsy” region by Western media in cartoons, articles and dramatic plays, was not always a flattering image. But the symbol has since been adopted by the Russian Federation itself in the form of the bear cub Misha (Миша), especially during the Olympics. What is lost in the imagery is that bear cubs grow up. The communist/authoritarian state under Stalin, to tie down Nazi Germany fighting on the eastern front in the Great Patriotic War, sacrificed 20,000,000 lives, so the Western powers could prevail over the Nazis in Europe. The US could never forgive its ally, so having neutralized one enemy, another had to be invented. The Soviet Union, and later the Russian Federation, has been the Evil Empire in US media ever since – although Europe took a more moderate tone because there were not two oceans protecting them from the USSR.

When NATO was created in 1949, it was originally designed as a counterweight to the USSR and its client states, the Warsaw Pact nations. One empire, the eagle, looked with suspicion at the other empire, the bear. If only there were a way to ensure that the bear would not devour the world. Perhaps, if the eagle could chain the bear – what US policymakers called “containment” – there would no longer be a threat? When the USSR became a nuclear power, the danger to the US increased: the bear could sit as an equal at the table across from the eagle! This could not be tolerated.

Owing to several factors, including an unsustainable economic system, unsustainable foreign wars and imperial expansion, US economic and political sabotage, and a leadership resistant to change, the Berlin Wall came down in 1989 and the Union of Soviet Socialist Republics itself collapsed two years later. The US had won the Cold War and was now the only remaining empire. It was the End of History.

Except that the US itself has an unsustainable economic system, unsustainable foreign wars and unsustainable imperial expansion. The Russian Federation started to rebuild economically under a system resembling crony capitalism. The US still needed an enemy to justify the largest, most powerful and most expensive standing military in history. The only way to sustain the unsustainable without firing a shot was to transform “containment” of Russia into “encirclement.” The media had been demonizing the Russian bear for decades, so even though the bear was chained, it became necessary, in order to show strength if not intelligence, to bait the bear. 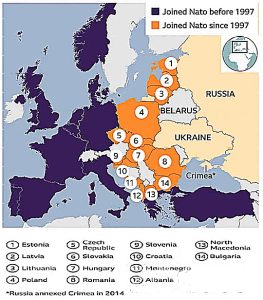 NATO expansion was the next step. Poland, Hungary and the Czech Republic joined NATO in 1999. Bulgaria, Estonia, Latvia, Lithuania, Romania, Slovakia and Slovenia joined in 2004. Then, out of nowhere, and unprovoked, Putin’s Russia attacked Ukraine in 2022.

Don’t you know there’s a war on?

My dad, although too young to serve at the time, did live through World War Two. He heard the expression often when people wanted things they knew they couldn’t get because of national rationing and the communal war effort: “Don’t you know there’s a war on?”

That “unprovoked attack on Ukraine” is the core of the mainstream narrative. Only it’s devoid of history and context. History and context are hard work. Explaining the conditions that led to war requires more TV time and column inches that most news organizations can spare in this short-attention-span world. Manufacturing consent is so much easier than instilling understanding. Closing off foreign news sources and alternative points of view is far easier than answering them.

But let’s step back. In 2014, Russia under Vladimir Putin, the worst leader since Vlad the Impaler, apparently, annexed the Crimea, a peninsula that was Russian territory under the Soviet Union, and which thereafter would give the Russian Federation access to the Black Sea. Did that action come out of nowhere? Or did Russia’s annexation of Crimea follow a US-backed coup, involving openly fascist forces, that ousted the pro-Russian President Viktor Yanukovych?

After vastly expanding NATO substantially more than “one inch eastward,” to the very borders of Russia, the United States created for itself an opportunity to inflict massive damage on the Federation, possibly leading to its eventual break-up. Why should Putin be nervous?

After the US under President Trump abandoned the Intermediate-Range Nuclear Forces (INF) Treaty in 2018, the US began to develop and test missiles capable of hitting major Russian cities from NATO allies in Eastern Europe. Why should Putin be nervous?

Even though the World War Two allies managed to demilitarize the nation, Germany has been planning to remilitarize since 2014, but the Russia-Ukraine conflict gave it a plausible excuse to expand military spending and violate its policy of not sending weapons into conflict zones. Why should Putin be nervous?

Even though the US has never been sanctioned for its destructive foreign wars, Switzerland broke hundreds of years of neutrality and joined the US and most of Europe by placing sanctions on Russia for its aggression. Why should Putin be nervous?

The only country to have been hit by nuclear bombs in wartime, Japan suggested stationing nuclear weapons on its territory, where they could be aimed at Russia (but also close to China). Why should Putin be nervous? 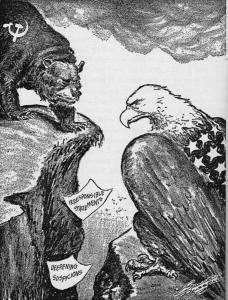 During an address in February, 2022, US President Biden asked, rhetorically, “Who in the Lord’s name does Putin think gives him the right to declare new so-called countries on territory that belonged to his neighbors? This is a flagrant violation of international law, and it demands a firm response from the international community.” Does nobody in the Western news media remember the dozens of regime-change wars the US has fomented without any sort of “firm response from the international community”?

Thirty-nine countries, including the UK, referred the Russian invasion of Ukraine to the International Criminal Court (ICC) for prosecution of war crimes. Will nobody in the Western news media point out that Ukraine signed but failed to ratify membership in the ICC, or that Russia (2016) and the United States (2002) withdrew their participation? Or that Ukraine and the United States were the only two countries to vote in December 2021 against a UN resolution aimed at “combating the glorification of Nazism and neo-Nazism”?

It matters not. Don’t you know there’s a war on?

President Biden began his State of the Union, “COVID-19 kept us apart. This year, we are finally together again. Tonight, we meet as Democrats, Republicans and Independents. But most importantly, as Americans.” Nothing brings a country together like a war. But this is not World War Two. The massive attention paid to a nation of white Christians attacking a nation of white Christians exposes a blatant racism among the US and the other Western powers: a dozen days of bombing brings the world to “stand with Ukraine.” But over 2500 days of bombing and the worst humanitarian disaster in the world in Yemen draws a yawn. What is wrong with us as a species?

There are Russians invading America in the Ukraine!
… Well, OK, Ukraine isn’t an American territory. But…

Russians are invading a NATO member and we must stand up to aggression!
… Well, OK, Ukraine isn’t a NATO member. Not yet. It might be someday.

America has to defeat Russian aggression against a strategic ally!
… Well, Ukraine is 4800 miles away and isn’t really strategic to the US and it’s more of a US pawn than an ally. But…

America has to support democracy in Ukraine!
… Well Ukraine isn’t really democratic and its regime, military and paramilitary forces are infiltrated with fascists and anti-Semites. It was those same far-right forces who were bombing the Donbas region for eight years before Putin “liberated” the Donetsk and Luhansk regions prior to attacking Ukraine.

But America can’t let Putin get away with… whatever it is he is planning. First Ukraine, then the world!

You can see how unhinged the thinking in the West is becoming. It’s almost as if the “Domino Theory” from the Vietnam era has risen, zombie-like, to stalk the power centers of the West almost 60 years on. But nobody applies that theory to Western imperialism. And 60 years after the Cuban Missile Crisis, after ignoring warnings from experts not in thrall to defense contractors and capitalist/imperialist expansionists, has war in Ukraine brought the world to the brink of another missile crisis? I wonder if this time, will we have the coolness to back away from mutual destruction?

Мир. In Ukrainian and Russian, it’s spelled the same. It means peace.

When you bait the bear, the bear lashes out. How do you keep that from happening? The answer is not appeasement. Maybe instead you should work with the bear to make us both feel safe?

"It has taken nearly 2000 years for the married woman to get back that personal independence which she enjoyed under the later Roman Law, but lost through the influence which Christianity exercised on European legislation. And it may be truly said that she regained it, not by the aid of the churches, but despite the opposition."