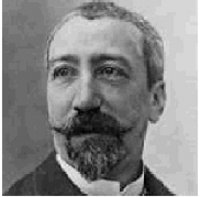 It was on this date, April 16, 1844, that the French writer, critic and Nobel Laureate Anatole France was born in Paris. His real name was Jacques Anatole François Thibault. Because his father, a bookseller, called his shop the ‘Librarie de France,’ he adopted this as his surname, becoming Anatole France.

The struggling writer began as a journalist, and married Valérie Guérin de Sauville in 1877. She was wealthy enough to mentor France and get him noticed, so that he could make his breakthrough with the novel, The Crime of Sylvestre Bonnard in 1881. The mentoring did not keep France faithful, however, and he began a liaison with Madame Arman de Caillavet, a patron of arts and the great love of France's life. The tensions pulled apart his marriage and France divorced his wife in 1893. He was to have many other amours, both concurrently and after his lover's death in 1910. It is not surprising that he once said, "Of all the sexual aberrations, chastity is the strangest," and "Religion has done love a great service by making it a sin."

His most famous work, Penguin Island, in 1908, was a satire set in the mythical land of Penguinia, substituting penguins for humans — much like Orwell's Animal Farm substituted animals for people. It poked fun at the foibles of mankind, the Church, and government. In his 1914 Revolt of Angels, France portrayed an angel converted to free thought through exposure to Epicurean philosophy. It was his idea that, "If fifty million people say a foolish thing, it is still a foolish thing."

All of France's novels were unabashedly pagan, and, in addition to lampooning clerics and Christianity, France argued for social reforms and attacked the shortcomings of contemporary society. He would say with a smirk in The Red Lily (1894), "The law, in its majestic equality, forbids the rich as well as the poor to sleep under bridges, to beg in the streets, and to steal bread." In the 1920s his writings were put on the Index of Forbidden Books of the Roman Catholic Church.

France joined his friend Émile Zola in the Dreyfus case and was the first to sign Zola's famous article J'Accuse, condemning the false treason indictment of Alfred Dreyfus, a Jewish officer. At a 1904 International Congress of Freethinkers at Paris, France said, "The gods advance, but they always lag behind the thoughts of men.... The Christian God was once a Jew. Now he is an anti-Semite." France was elected to the Académie Française in 1896 and awarded the Nobel Prize for Literature in 1921. He was honorary President of the French National Association of Freethinkers, perhaps on the basis of his drastic criticism of the Church in a 1905 work, The Church and the Republic.

Ten years before his death, France moved to Tours, where he died on October 12, 1924. His funeral drew attendees from the highest ranks of the French government.