Joe Biden Is Not Serious

I was reading Pres. Biden’s speech to joint session of Congress on Wednesday (4/28/21) and I came away with the impression that he’s a nice old man, but he’s not serious. Not serious and not up to the challenge of governing these Divided States of America. 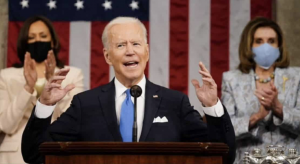 In his speech, Mr. Biden covered a lot of ground, used a lot of words, but platitudes are not policies – and policies without strategies are just a wish list.

As I said, platitudes are not policies – and policies without strategies are just a wish list. And that is why I say Joe Biden is not a leader and is not serious. I hope he proves me wrong.

There are in this country... a certain proportion of restless and turbulent spirits who must always have something to quarrel about with their neighbors. These people are the authors of religious revivals.