Lies My Newspaper Tells Me 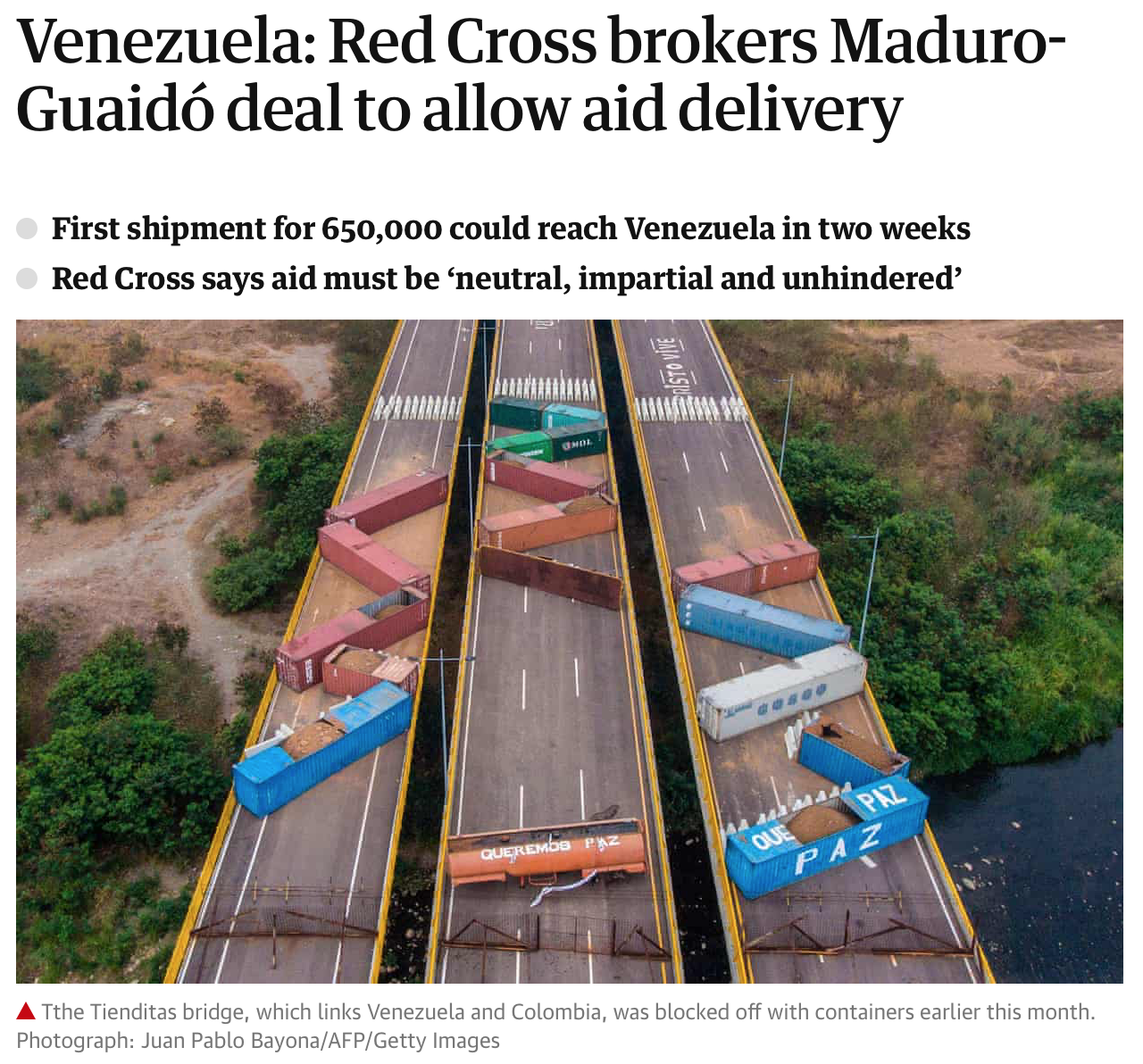 The Guardian article, by Joe Parkin Daniels (in Bogotá, Columbia – one wonders why it wasn’t Joe Parkin Daniels in Caracas, Venezuela), is headlined, “Red Cross brokers Maduro-Guaidó deal to allow aid delivery,” already apparently siding with the 25% of the world that recognizes some legitimacy in Juan Guadó’s claim to leadership in Venezuela.

But from the first, I know I’m being lied to. The picture at the top of the article shows Las Tienditas Bridge, which links Venezuela and Colombia, with cargo containers blocking the three spans. The caption says the bridge “was blocked off with containers earlier this month.” This is true but misleading: the bridge has been blocked off since 2016 – because the bridge has never been opened! Only the containers were added. I know this because I found an older picture, from 2016, at La Opinion. But maybe the Guardian can’t use Google? 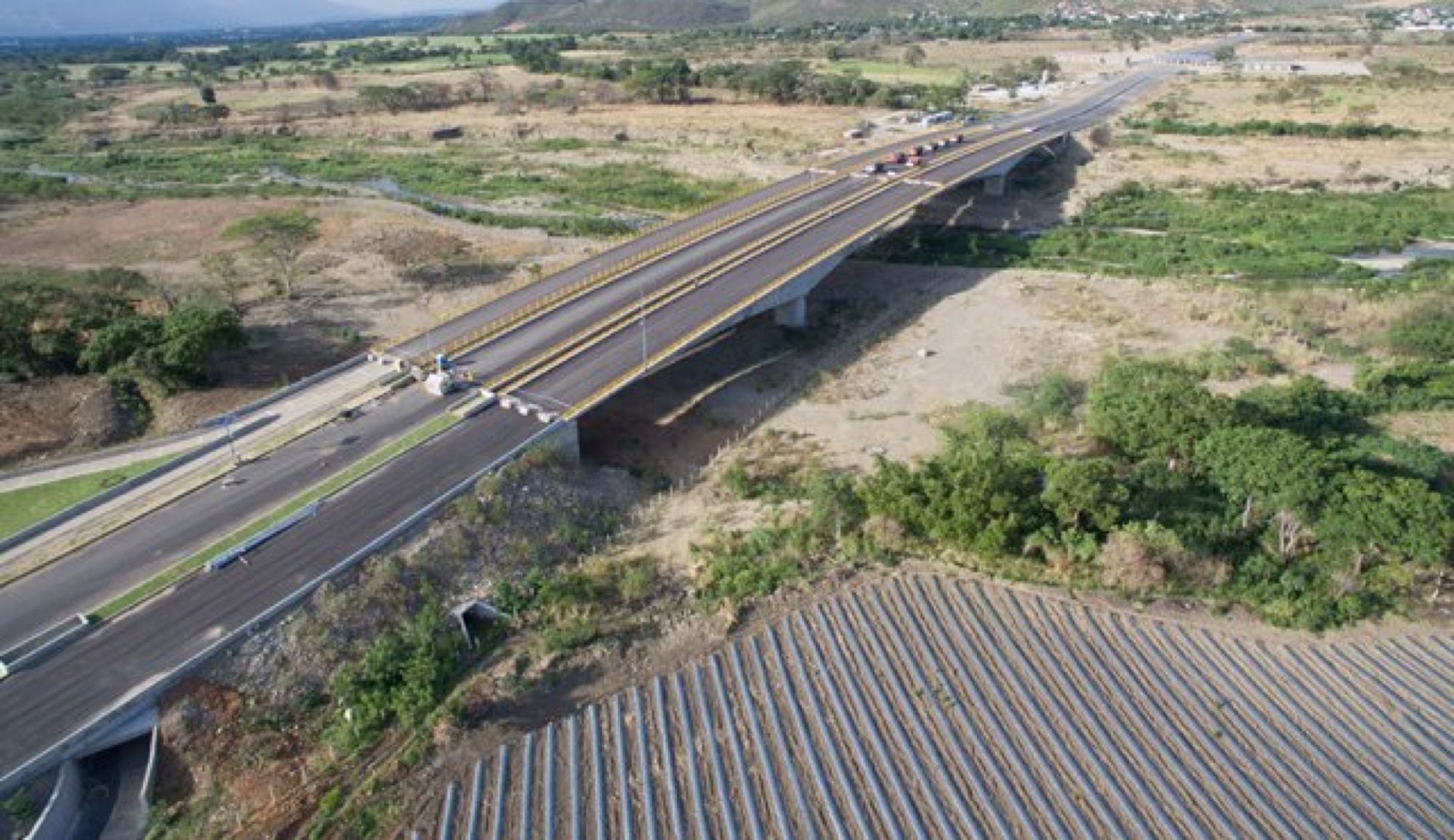 The article gets worse from there. The first paragraph reads—

The Red Cross has brokered a deal with representatives of Venezuela’s embattled leader, Nicolás Maduro, and his rival, Juan Guaidó, to allow humanitarian aid into the country, indicating a seldom-seen middle ground between the two men that contest the presidency.

This is again misleading. Nicolás Maduro was re-elected President of Venezuela on 20 May 2018 (sworn in on 10 January 2019), an office in which he has served since 2013, after the hugely popular Hugo Chávez died. Juan Guaidó declared himself “interim president” of Venezuela on 23 January 2019. To put this in other terms, I could declare myself a “rival” of President Trump, but that doesn’t make it so. The article, however, seems to equate the claims of a previously unknown politician who believes himself entitled to an office for which he never ran and to which he was never elected.

The article goes on—

The first shipment of aid for about 650,000 vulnerable people could reach Venezuela in two weeks, Francesco Rocca, the president of the International Federation of the Red Cross, told a press conference on Friday.

Again, the article misleads. This is only the “first” shipment of aid if you don’t count ongoing aid from Russia and China and ignore aid that might have come from other countries had not the USA bullied them into line. It is a fact that the UN and the ICRC (International Committee of the Red Cross) would have nothing to do with assisting US aid efforts to Venezuela because they saw right through the cynical politics of it. The IFRC (International Federation of the Red Cross and Red Crescent Societies), a related organization, operated here. This is not to suggest that aid is a bad thing, but there are multiple reasons why some of it is necessary.

More from the article—

Venezuela has been mired in an economic, political and humanitarian crisis for five years. Shortages and hyperinflation - set to reach 10m% this year – have made medicines and even basic foodstuff hard to obtain for most people.

Saying there has been a problem for five years without giving context and background is at best lazy reporting, at worst agenda reporting. Venezuela was hit hard twice: first in January 2016 by an oil price drop to less than $30/barrel, then in August 2017 by Trump Administration economic sanctions, preventing the cash-strapped nation from borrowing money in the usual way. As one commentator noted, “the sanctions made it virtually impossible for the Venezuela government to take the measures necessary to eliminate hyperinflation or recover from a deep depression.” 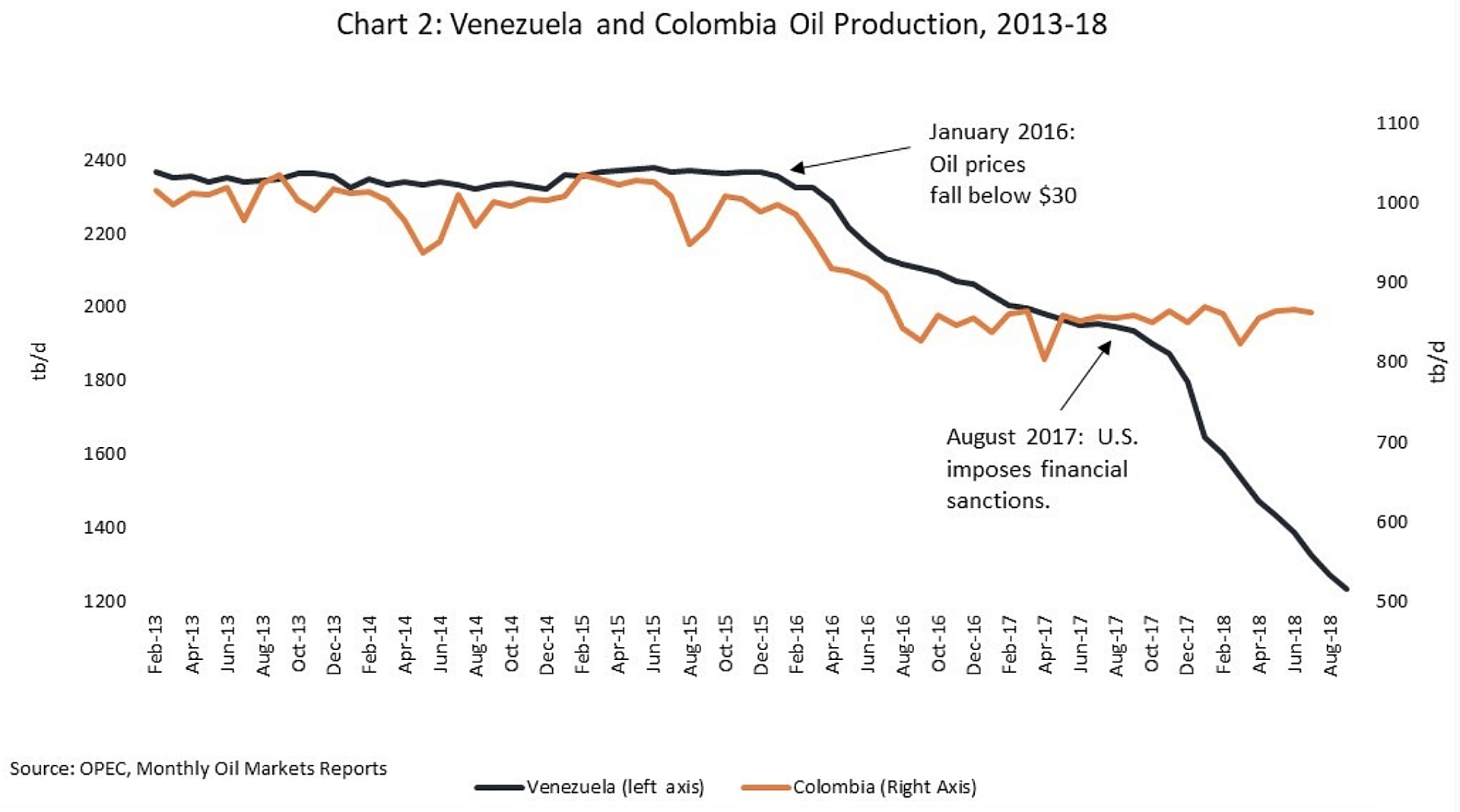 Sanctions do not hurt the leaders or the economic elite (mostly white), which comprise most of those who are fleeing the country: instead, they hurt the Venezuelan people (mostly people of color). Sanctions are a form of warfare, if not a war crime. As another source puts it, “The record of economic sanctions in forcing political change is dismal, but as a way of reducing a country to poverty and misery it is difficult to beat.”

One final note on the article—

The new effort seems more likely to succeed in large part because of the involvement of the Red Cross, which had distanced itself from the previous attempt to shift the aid into Venezuela.

The reason previous aid from Western governments failed to make it through was because the aid was not even remotely what Francesco Rocca stressed it must be: “independent, neutral, impartial and unhindered.” And please note this: There are more people in need of “humanitarian aid” in the USA than there are people in Venezuela!

Maduro and his state are far from perfect, but they do not live in a state of amnesia, or in an alternate universe. They well remember that it was Elliott Abrams, now Mr. Trump’s Special Representative for Venezuela, and his fellow war criminals, who hid weapons of war in shipments of humanitarian aid to the Contra criminals in Nicaragua. They’ve seen this regime-change script before.

2 comments on “Lies My Newspaper Tells Me”