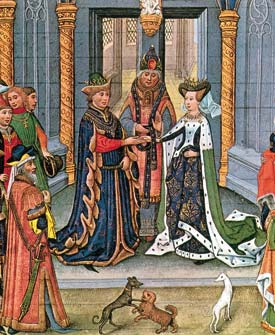 It was on this date, April 28, in 862, that the bishops of Lorraine, in the Synod of Aachen, approved a divorce between King Lothair II, King of Lotharingia (the lands today on the border between France and Germany and what is now western Switzerland), and his wife Teutberga (daughter of Boso the Elder, a Frankish Count of Turin), so that he could marry his mistress Waldrada and get an heir. (It is a drama that would be repeated, more famously, almost seven centuries years later.) This pretty much puts the lie to the Roman Catholic Church’s claim of always taking a hard line against divorce, or rather, promoting the “indissolubility of marriage.” There is no evidence from pre-Christian times that allowing divorce led to evil or even immorality, and plenty of evidence from the Christian era that the reverse is true. The Church really only began to impede divorce in the 9th century, and it wasn’t until the 11th century and the time of Pope Gregory VII (Hildebrand) that marriage and divorce were really regulated, along with the celibacy of the clergy. Nobody took to well to either innovation. Consequently, like modern-day opponents of marriage equality, opponents of divorce would never “let … man put asunder” what “God hath joined together”—unless it served the purposes of State or could be “lawyered” with a little coin in the holy palm.

For example, the Roman Catholic Church allows a consummated marriage—“consummated” being a quaint euphemism for the participants having had sex with each other—to be annulled, that is, the marriage could be declared invalid from the start. This turned out to be hard on any children from the marriage, if having married biological parents is the only avenue to inheritance and other rights and entitlements under the law—with the added disadvantage of the children having no choice in the matter, but bearing most of the consequences. An unhappy but indissoluble marriage has bad effects on children, but it is also true that divorce has equally negative consequences for children.

But the central question remains: was forbidding divorce a moral step up or step down for western civilization? It seems from the historical record that societies tend to loosen the regulation of marital unions as they become freer from the hold of priestcraft and religion, just as marriage tends to be iron-clad in less progressive and lesser-developed societies. The Aztecs were never permitted to divorce; divorce is illegal in Roman Catholic Philippines today. The Ancient Athenian Greeks had liberal divorce laws and the Roman Empire carried on the tradition of matrimonia debent esse libera or “marriages ought to be free.”

There were sporadic attempts up to the sixteenth century for the Church to control marriage and repudiate divorce. There was a brief Papal interference in the matter in the ninth century, but the Dark Ages were not the best time for the Church to attempt to speak with moral authority, having steeped itself in corruption for a century! From the eleventh century, canon law was revised and updated—if not by the hand of God then by the quest for control of the secular sphere—and, writes one historian, “the notorious condition of sexual morals during the next few centuries is a sufficient comment on the boast of the apologist. Vice in all forms, natural and unnatural, and prostitution, were amazingly open and flagrant.”*

Divorce was finally, after a long struggle, officially forbidden by the Council of Trent, 1545-1563. But the prohibition became a mockery of itself—and a profit center. Our historian continues:

The Church… created impediments to marriage, or conditions which made the marriage null and void from the start; and the task of discovering that these had been violated became at once a most profitable occupation for the clergy and provided a substitute for divorce. The degrees of kindred within which one could not validly marry were at one time seven, but were eventually fixed at four. Since kinship was counted, in ecclesiastical law, not only by blood (consanguinity), but by god-parentship in baptism, and by any sexual intercourse, it was generally easy to find a ground of nullity for spouses who wished to remarry, or for men who would repudiate their wives. Another easy ground was to discover that one of the parties to the marriage had not internally consented in repeating “I will”; a ground that is still recognized and profitable in the Roman Church.... There was also the allegation, often after years of wedlock, that the wife had physical defects, or was in some anatomical fashion repulsive, and even bishops were at times ordered to examine them.*

Of course we all know the most famous divorce controversy in European history: We hear Catholics boast of Pope Clement’s refusal to nullify the marriage of Henry VIII to Catherine of Aragon. What they conceal is that it was a political matter, but what they forget is the career of Henry’s own sister. Margaret, who was what you might call sexually generous, got her marriage annulled in 1525 on the bizarre ground that her first husband, James IV, had not been killed at Flodden (where he did in fact die in a disastrous military defeat in 1513). She married a noble who had got his marriage annulled by the very same Clement! Later tiring of him, Margaret demanded another nullity decree, this time on the grounds that she had committed adultery with the noble before their marriage!

Islam is little better. Divorce is accepted in Islamic law and marital jurisprudence, where it is referred to as talaq (لطلاق‎) if a man initiates it or khula (خلع‎) if initiated by a woman—but women typically have a more difficult time of it. It is presumably frowned upon by Allah. Muslim men who are unmarried also have the option in many places (including Iran) for “temporary marriages” to satisfy their lust, after which they divorce with ease. (It should be noted that these marriages can never be with atheists, only with “people of the book”). The rates of divorce were higher in the medieval Islamic world and Ottoman Empire than they are in the modern Middle East, but the low rates of divorce may be explained by a resurgence of the need to control women by restricting access to divorce. There will be no progress in the Muslim world until equality of the sexes becomes halal.

Judaism seems to have been ahead of the younger religions by accepting divorce as a fact of life, even if an unfortunate one. Jewish custom and practice generally maintains that shalom bayit (שְׁלוֹם בַּיִת) or peace in the home is a desirable state, so it is better for a couple to divorce than to remain in an ugly marriage.

In the U.S. Bible Belt, especially Florida, Kentucky, and Tennessee, divorce rates top 13%. In the secularized eastern U.S., New Jersey has the lowest divorce rate; New York, Connecticut, Delaware and Massachusetts have the next lowest rates. Indeed, East Coasters get divorced at rates of less than 12%. However, the U.S. has the third-highest divorce rate in the world; the 10 lowest divorce rates are in Catholic or Muslim countries where divorce is difficult. In the West, it could be said that civilization progressed in direct proportion to the abandonment of religious control of marriage and divorce, and the decline of religion generally. Predominantly Protestant countries, and those in the West that have secularized, see the benefits of putting marriage and divorce on a human-centered basis. Those countries, Catholic or Muslim, that still think their sky-gods know or care how they couple and uncouple, milk human misery for profit to this day.

__________
NB: Lothair’s behavior may bring to mind the words of Ambrose Bierce from some eight centuries later: the people followed the teachings of their Church “in so far as they are not inconsistent with a life of sin.” But if you thought your divorce was messy, you should know how things went with Lothair’s divorce from Teutberga! In 857 (this was the Dark Ages, after all), accusing her of incest before their marriage with her brother, a lay abbot named Hucbert, Lothair imprisoned Teutberga. Lothair even went so far as to call a church synod of all the bishops of Lotharingia to decide her fate, but ensured the outcome by appointing relatives of Waldrada, his mistress, to preside. Crying foul, Hucbert took up arms on Teutberga’s behalf. That, and Teutberga surviving the ordeal of boiling water, made Lothair reluctantly see the hand of God, so he restored her in 858. But the resourceful Lothair then got the support of his brother, Emperor Louis II, and another friendly venue: some local clergy. They consented to the annulment and to his marriage with Waldrada in 862. This was ratified by a synod of Frankish bishops at Metz in 863. Still trying to make the marriage work—for property and power, of course, not for love—Teutberga escaped and did her own venue shopping: she appealed to Pope Nicholas I (famous in his own right for his use of the Pseudo-Isidorean Decretals to expand papal power). Even under threat of military assault from Lothair’s troops at Rome, Nicholas voided the decision of the synod and reaffirmed Lothair’s marriage to Teutberga. Bowing to a threat of excommunication, which was quite often used for political purposes in the Dark Ages, in 865 Lothair again restored Teutberga. But then Teutberga decided she had had enough (or was compelled to say so), and, Nicholas having died in 867, Lothair traveled to Italy to try again with the new Pope Adrian II. Apparently getting the decision he desired, Lothair happily set out on his return journey, only to take ill with fever and die at Piacenza on 8 August 869. Lothair’s death left only his “illegitimate” son by Waldrada, Hugh (there may have been three daughters, as well: Gisela, Bertha and Ermgarde), but no “legitimate” heir by Teutberga. Consequently, Lothair’s kingdom was divided by the Treaty of Meerssen.