This Week in Freethought History (December 1-7)

Last Sunday, December 1, but in 1970, American comedienne, writer, and actress Sarah Silverman was born. Her comic style addresses social taboos and controversial topics such as racism, sexism and religion by criticizing such small-mindedness ironically. Silverman says she was not “raised with any religion,” only considering herself ethnically Jewish. About her Jewishness, which Silverman mines for material, she says, “I have no religion. But culturally I can’t escape it; I’m very Jewish.” During a 2005 interview, KCRW radio host Elvis Mitchell commented on her “Jesus Is Magic” t-shirt, to which Silverman replied that she is “almost positive there’s no god.” During a 2009 appearance on “Real Time With Bill Maher" on HBO, Silverman said, “I can’t imagine there’s a God, personally. Um, I’m not religious. I don’t have, wow. I don’t have religion at all.” When Maher, an atheist, said he agreed, she added, “I’m not ruling it out.” But in a Twitter comment, Sarah Silverman took the issue down to its materialistic elements: “We’re all just molecules, Cutie.”

Last Monday, December 2, but in 1547, Spanish conquistador of Mexico, during the time of Aztec King Montezuma II (1466-1520), Hernando Cortes, died peacefully on a lavish estate near Seville. About a generation after Columbus discovered the Americas as a good source of Christian converts, Cortes found the Christianizing of the highly civilized Mexican tribes an excellent excuse to advance his appetite for conquest, control and capital. Cortes was born about 1485 in Medellín, Spain, heir to a noble family of fallen fortunes. His big break came in 1519 with the opportunity to lead an expedition from Cuba to the Yucatán Peninsula, and thence into Mexico, to make contact with, and converts of, the natives. It is rarely reported in school history books that the reason the Christianizing of the Aztecs went so well in the beginning was that the Aztecs were already practicing many seemingly Roman Catholic rituals! The Aztecs sang hymns and prayers, made offerings in their temples, burned aromatic herbs on the altars, fasted, confessed sins to (and received penances from) their priests, and practiced a sort of “holy communion,” in which they broke up a paste image of their god and distributed it to be eaten with great reverence. Even better, Cortes had a peculiar legend on his side: Quetzalcoatl, the Aztec creator-god, was depicted as a pale-skinned, bearded man in a conical hat, his long, flowing robe decorated with crosses and feathers. Cortes arrived in Yucatán looking just so. Furthermore, continuing the parallel with the Christian story, Quetzalcoatl was the only son of a supreme deity. But appearances, as the Aztecs found out to their sorrow, could be deceiving. The Catholic Encyclopedia, which claims Cortes among the faithful, admits that aside from his military aptitude, shrewdness and daring, the explorer exhibited “no excess of scruples in morals.” So when Cortes died, on this date in 1547, he died a good Catholic, if not a good man.

Last Tuesday, December 3, but in 1960, British-American actress Julianne Moore was born. Because of her mother’s heritage, Moore claimed British citizenship in 2011. Traveling a lot as an Army child introduced her to multiple schools and types of people, including high school in Frankfurt, Germany. She also picked up her desire for an acting career, earning a BFA in Theatre in 1983. But after moving to New York to pursue stage acting, she adapted names from mother and father to become Julianne Moore. Appearing in literary as well as popular plays and television, Moore got some solid notice as a supporting character in the 1992 thriller The Hand That Rocks the Cradle. Over the next two decades Moore starred or featured in Boogie Nights (Oscar-nominated, 1997), Far From Heaven and The Hours (2002, both Oscar-nominated), The End of the Affair (1999, Oscar-nominated), The Kids Are All Right (2010) and as Vice Presidential candidate Sarah Palin in Game Change (2012). Moore received a star on the Hollywood Walk of Fame in 2013. Politically, Moore is a staunch pro-choice advocate on abortion, an active member of Planned Parenthood and supports marriage equality. She is also open about her atheism. On “Inside The Actors Studio,” the host asked her, “What would you like to hear God say to you at the pearly gates?” Julianne Moore replied, “Well… I guess you were wrong, I do exist.”

Last Wednesday, December 4, but in 1835, British writer Samuel Butler was born. Being the son and the grandson of clergymen, Butler began to study along the same lines, but in 1859 he refused to be ordained, instead taking to literature. He published his first novel, Erewhon, (the title is the word “nowhere” spelled backwards) in 1871. Erewhon, at first published anonymously, made Butler’s reputation. In it he skewered the churches. There followed brilliantly witty satirical works, including his criticism of Victorian society, The Way of All Flesh (1903). In his works Butler scarcely disguises his criticisms of Christianity. He once said, “An honest God’s the noblest work of man,” spoofing Alexander Pope’s line. And in an essay called “Unprofessional Sermons” from his Note-Books, Butler wrote, “Prayers are to men as dolls are to children. They are not without use and comfort, but it is not easy to take them very seriously.” Not to be confused with the Samuel Butler who wrote the satirical poem “Hudibras” two centuries earlier, it was Samuel Butler who wrote, in The Way of All Flesh, “A clergyman can hardly ever allow himself to look facts fairly in the face. It is his profession to support one side; it is impossible, therefore, for him to make an unbiased examination of the other.”

Last Thursday, December 5, but in 1974, the last episode of the ground-breaking BBC-TV comedy series, “Monty Python’s Flying Circus,” was shown on British television. “Monty Python’s Flying Circus” was broadcast as 46 30-minute episodes beginning on 5 October 1969. Some of their most memorable sketches include a man trying to return a dead parrot to a pet shop; a cheese shop that is completely uncontaminated by cheese; the Lumberjack Song; the Spam song and many others. Nothing is sacred in the skewed Monty Python universe: not politics, not sex, and certainly not religion. Among their irreligious revelries are “The Spanish Inquisition,” “Crackpot Religions Ltd” and the song, “Every Sperm Is Sacred,” a satire on the Catholic church’s attitude toward birth control—

The skewering of faith continued in the Monty Python movies, especially in the 1979 Monty Python’s Life of Brian, which satirizes the rise of the Christian religion with a fictional Brian who keeps getting mistaken for the Messiah. Brian was banned in Norway and Ireland for blasphemy — then cleverly re-released in the U.S. on 30 April 2004 for its 25th anniversary, two months after the theatrical release of The Passion of the Christ! 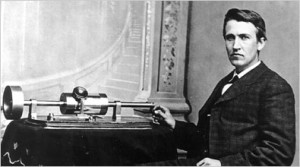 Edison at his phonograph

Yesterday, December 6, but in 1877, American inventor Thomas Edison demonstrated the first sound recording at West Orange, New Jersey. On that occasion he recited “Mary Had a Little Lamb” into a recording device using a needle to scratch a sound track onto a cylinder wrapped in tinfoil. The first sound recording followed the first electronic long-distance telegraph message by 33 years. The secular children’s poem was recorded in preference to the paraphrase of Numbers 23:23, “What hath God wrought,” transmitted from Baltimore to an astounded Congress in Washington DC by the Nativist politician and painter Samuel F.B. Morse. While Morse thanked God for what the scientific work Hans Christian Oersted, Joseph Henry and Michael Faraday had wrought, the skeptical Edison credited the proper authorities. “A good idea is never lost,” Edison said, “Even though its originator or possessor may die, it will someday be reborn in the mind of another. … Because ideas have to be original only with regard to their adaptation to the problem at hand, I am always extremely interested in novel ideas others have used successfully.”

Today, December 7, but in 1928, American linguist, political commentator and activist Noam Chomsky was born. His family was highly educated and instilled in Chomsky a love of learning that took him to the University of Pennsylvania at age 16. There he found his life’s work in linguistics, criticizing the behaviorist trend in modern linguistics by setting out his ideas on transformational grammar. Chomsky is a member of the American Academy of Arts and Sciences, the National Academy of Sciences, and the American Philosophical Society. In the 1960s, coinciding with his criticism of U.S. involvement in the Vietnam War, Chomsky became activist. He was arrested many times and “honored” by making it into President Richard Nixon’s “Enemies List.” Rather than giving a straight answer to the question of whether or not he is an atheist, Chomsky approaches it as a philosopher should – by questioning the question: in a panel discussion from 2006, Chomsky replied, “Like everyone participating, I’m what’s called here a ‘secular atheist,’ except that I can’t even call myself an ‘atheist’ because it is not at all clear what I’m being asked to deny.”

Chomsky continues, “As for the various religions, there’s no doubt that they are very meaningful to adherents, and allow them to delude themselves into thinking there is some meaning to their lives beyond what we agree is the case. I’d never try to talk them out of the delusions, which are necessary for them to live a life that makes some sense to them.” In The Prosperous Few and the Restless Many (1993, 2003), Chomsky writes, “I was just looking at a study by an American sociologist (published in England) of comparative religious attitudes in various countries. The figures are shocking. Three quarters of the American population literally believe in religious miracles. The numbers who believe in the devil, in resurrection, in God doing this and that – it’s astonishing. These numbers aren’t duplicated anywhere else in the industrial world. You’d have to maybe go to mosques in Iran or do a poll among old ladies in Sicily to get numbers like this.” It was Noam Chomsky who said, when interviewed by Wallace Shawn, “[T]he Bible is probably the most genocidal book in the literary canon.”

“The most preposterous notion that H. Sapiens has dreamed up is that the Lord God … wants the saccharine adoration of His creatures…. Yet this absurd fantasy … pays all the expenses of the … least productive industry in all history.”