Last Sunday, October 27, but in 1782, Italian virtuoso violinist and composer Niccolò Paganini was born. Paganini was a child prodigy, composing a sonata at age eight and performing onstage from the age of eleven. He toured and captivated Vienna in 1828 and made admirers of Goethe, Heine and Schumann on his equally successful tour in Germany. Paganini went on to conquer Paris and London. During his concert career, it was rumored that his mesmerizing virtuosity was a gift from the devil – a rumor Paganini did nothing to dispel! Very few of his compositions were published during his lifetime, which helped to stymie imitators. Sadly, Paganini’s international touring schedule crushed his health by 1834. He announced his retirement in 1835, but later lost his voice. Niccolò Paganini finally died from cancer of the larynx at age 57. His principal biographer admits only that Paganini practiced “religious indifferentism.” Paganini received no last sacrament nor any religious service at his funeral, and his burial was non-religious. At least in Italy, Paganini was well known as an Atheist. 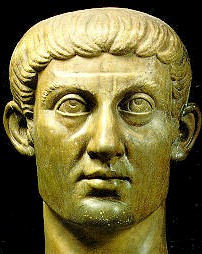 Last Monday, October 28, but in 312 CE, Roman emperor Constantine the Great, aged 32, is said to have crossed the Milvian bridge with a labarum bearing the sign of the Christ, a Chi Rho [ΧΡ] he saw in a dream, to win the battle for supremacy over the legally divided Roman Empire. The story of the miraculous sign is related by “the father of ecclesiastical history,” Eusebius, bishop of Cæsarea, which he wrote after the Emperor was safely in his grave. In fact, Constantine advanced to the Roman throne by wading through rivers of blood, with more to come. He established a new capitol in Constantinople after being driven from Rome because, in a fit of jealousy, he had ordered the murder of his wife, a son, and a juvenile nephew. If he was a Christian before his deathbed baptism, it is hard to tell: he carried pagan offices and titles throughout his life. Constantine did assure that the Empire was secured for the Christian cult to expand and grow, Christian supremacy cemented by decrees shutting out competition, plus generous donations of state money and property. Thus did Christianity triumph. Within a century the state-supported Church was wealthy, corpulent and corrupt. 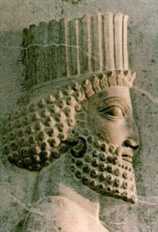 Last Tuesday, October 29, but in 539 BCE, Cyrus the Great (576-529 BCE) conquered Babylon and ended the Babylonian “Captivity.” The city of Babylon, which was located south of Baghdad in what is now Iraq, never lived up to its scarlet reputation: it was reviled by Christians as a sink of immorality, vice and depravity, told in delicious detail by the Greek historian Herodotus, who never saw the city. But here history gets in the way of mythology: Babylon is the soil in which the Hammurabi Code* matured about 4,000 years ago, at a time when the Hebrews were illiterate polytheists. That code, which its author says was man-made, not handed down from any god, asserts more rights for women and more justice for working people than any code of law until modern times. Cyrus (کوروش بزرگ; Old Persian: Kūruš; Old Testament כורש), Emperor of Persia, when he came calling, took the city peacefully. Then he did something extraordinary: he let the people keep their religions and customs! He even sacrificed to their local gods. Then, in as an act of piety, or a shrewd political move, he released the Jews from their 70 years of “Babylonian Captivity.” It was a strange sort of captivity: Babylon was wealthy and cosmopolitan, and there the Hebrews learned literacy. After their release, during what we call the Post-Exilic period, the Hebrews considered Babylon so evil… that most of the them preferred to stay in “captivity.” It seems they had gotten used to a cultured community without the yoke of Yahveh!

Last Wednesday, October 30, but in 1735, the second president of the United States, John Adams, was born. He graduated from Harvard and became a member of the first Continental Congress, a signer of the Declaration of Independence, Minister to France, Holland and England, and the first Vice President before becoming the second President. As a member of the Massachusetts constitutional conventions of 1779 and 1820, he fought to separate church and state, but failed. As President, he signed the Treaty with Tripoli,† which states in Article 11, “The Government of the United States is not in any sense founded on the Christian religion.” The treaty was ratified by the Senate in 1797 without dissent. One of the most cultivated of the revolutionaries, Adams was inspired by French and English Deistic literature. Unlike his friend Jefferson, he was not a dogmatic Materialist, but he was just as contemptuous of Christianity and was almost an Agnostic. To Jefferson in 1817 he wrote, “Twenty times in the course of my late readings, have I been on the point of breaking out, ‘This would be the best of all worlds if there were no religion in it!’ But … [w]ithout religion, this world would be something not fit to be mentioned in polite company – I mean hell.” In an 1825 letter to Jefferson, Adams calls the doctrine of the incarnation of Jesus (a god becoming human) an “awful blasphemy” and thought the First Cause (the prime mover of all the universe) could be defined non-theologically, “whether we call it Fate or Chance or God.” In an 1820 letter, Adams defined God as “an essence that we know nothing of” and believed that efforts to further define God were “a game of push-pin” (an English child’s game). After Adams’ wife Abigail died in 1818, Jefferson wrote Adams a letter of sympathy, to which Adams a confirmed Deist responded with the hope, if not the certainty, of immortality: “If I did not believe in a future state, I should believe in no God.” 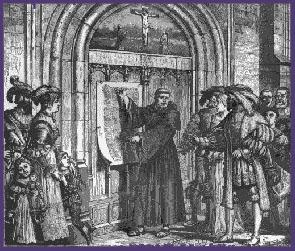 Last Thursday, October 31, but in 1517, the Protestant Reformation began in Germany, when 31-year-old Martin Luther posted his 95 theses at All Saints’ Church in Wittenberg, Saxony. That document attacked papal abuses and the sale of offices and indulgences by church officials, notably posted on a church in the Holy Roman Empire famous for its immense collection of holy relics. The Medici pope who condemned Luther’s heresy, Leo X (pope from 1513-1521) – a priest at age 7, a cardinal at 13 – was remarkably corrupt, as even the Catholic Encyclopedia gingerly admits: he enjoyed indecent comedies in the Vatican, lavish spending, gross nepotism, and homosexual liaisons. All Italy knew it, and all Europe begged for reform. But corruption was almost a tradition, reaching back centuries before Leo and enduring long afterward. Martin Luther himself was coarse, bigoted and superstitious, as well as learned (and, of course, excommunicated), but he was far from wrong to argue for the reform of the lavish luxury and doctrinal defects of the Church at Rome. 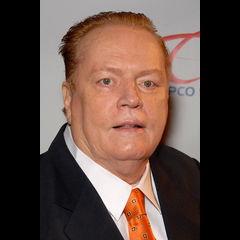 Yesterday, November 1, but in 1942, Hustler magazine publisher Larry Flynt was born. The publisher of around twenty sex magazines, Larry Flynt is known equally well for Hustler, the first men’s magazine to show “pink-shots,” or photos including female labia, and for his brushes with obscenity law. His was, as he put it, pornography for the working man, deliberately cruder than Playboy. Charles H. Keating Jr. took Flynt to court for obscenity in 1976: Flynt was convicted, but the sentence was overturned on a technicality. A 1983 ad parody in Hustler brought Flynt to court with televangelist Jerry Falwell (d. 2007). Flynt not only won, but the decision clarified that public figures cannot recover damages for “intentional infliction of emotional distress” based on satires. The 1996 biographical film of Flynt’s life (The People vs. Larry Flynt) put it this way, as actor Woody Harrelson, portraying Flynt, says, “If the First Amendment will protect a scumbag like me, then it will protect all of you. ‘Cause I’m the worst.” As Flynt put it in an E! Online interview, “The church has had its hand on our crotch for 2,000 years, and the government is seemingly moving into that direction. They feel that if they can control your pleasure centers, they can control you.” In the epilogue to his 1996 autobiography, Flynt says, “I have left my religious conversion behind and settled into a comfortable state of atheism. I have come to think that religion has caused more harm than any other idea since the beginning of time. The Jerry Falwells of this world are living proof of the hypocrisy that permeates organized religion in America and around the world.” 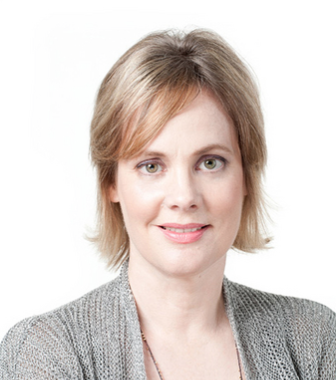 Today, November 2, but in 1955, the co-founder and current co-president of the Freedom From Religion Foundation, Annie Laurie Gaylor was born. She was educated in journalism at the University of Wisconsin–Madison. The Freedom From Religion Foundation, incorporated in 1978, promotes the separation of church and state. Through radio broadcasts, media appearances, print publications and podcasts, the FFRF educates the public about atheism, agnosticism and religious freedom – often engaging in legal action to help cities and towns comply with the First Amendment of the U.S. Constitution. Since 1978, and with co-president and husband Dan Barker since 2004, Gaylor has worked to make the FFRF the largest organization of atheists and agnostics in the United States. Describing herself as a feminist and liberal, Gaylor has written Woe To The Women: The Bible Tells Me So (1981) about the treatment of women in the Bible, Betrayal of Trust: Clergy Abuse of Children (1988), documenting widespread sexual abuse by clergy and Women Without Superstition: “No Gods—No Masters” (1997), an anthology of the writings of women freethinkers. In response to a 2009 Seattle bus campaign, in which placards displaying the message with Santa saying, “Yes Virginia... there is no God,” were criticized, Gaylor replied, “If [Christians] are so insecure that they can’t even stand that somebody has a bus sign, a funny bus sign saying there’s no God, what does that say about their beliefs? They must have a lack of confidence... to be so angry just because there’s something saying there are atheists and agnostics in this country and here's our view.” Pointing out that every minority group in the nation is more widely accepted now than in the 1960s, except atheists, Gaylor said in a 2009 interview timed for Christmas, “Nonreligious people in this country are scarcely tolerated. It’s considered aggressive to even tell somebody in the context of a conversation about religion that you’re an atheist.”

October 27: The Dutch author, and the greatest humanist scholar of the northern Renaissance, Desiderius Erasmus was born (1466).

October 28: The entrepreneur who became chairman and CEO of the world’s largest software firm, Bill Gates, was born (1955).

* You can read my rant about Hammurabi and his Code with historical detail and modern perspective, at this link.
† Often called the “Treaty of Tripoli,” I can’t quite figure out how this abbreviation is derived from the full title: “Treaty of Peace and Friendship between the United States of America and the Bey and Subjects of Tripoli of Barbary.” It was a Treaty of Peace,” but not a Treaty of Tripoli, as if it comprised only that Barbary state. Perhaps it should be called the “Treaty Between Tripoli and the United States,” but I suppose that’s too many words for today’s short attention spans. Besides, when making a treaty, you make it with a country – as if two or more entities are doing something together – not of a country. Suffice it to say that the shorter preposition strikes a discord in my ear.

"The abolition of religion as the illusory happiness of the people is the demand of their actual happiness."