Last Sunday, October 20, but in 1859, American philosopher and educator John Dewey was born. After taking his degree in philosophy from Johns Hopkins University in Baltimore, Dewey gradually shed the strictures of his strict religious upbringing. His philosophical naturalism cast human thought as practical problem-solving which proceeds by testing rival hypotheses against experience in order to achieve the “warranted assertability” from which correct action derives. This included social reform. As Dewey said, “Demons were once appealed to in order to explain bodily disease, and no such thing as a strictly natural death was supposed to happen. The importation of general moral causes to explain present social phenomena is on the same intellectual level. Reinforced by the prestige of traditional religions, and backed by the emotional force of beliefs in the supernatural, it stifles the growth of … social intelligence.” It was John Dewey who said, “There is nothing left worth preserving in the notions of unseen powers, controlling human destiny, to which obedience and worship are due.”

Last Monday, October 21, but in 1833, Swedish chemist Alfred Nobel was born. It is one of the ironies of his life that a man who made his fortune in the invention and manufacture of weapons of war – dynamite and other nitroglycerine derivatives – bequeathed among five annual prizes one acknowledging efforts toward peace. Perhaps the industrialist Undershaft in George Bernard Shaw’s Major Barbara was modeled on Nobel, but Shaw's point is true: no money is ultimately untainted. When Alfred Nobel died on 10 December 1896, his will stipulated that the interest on his accumulated wealth was to be awarded (by the Nobel Foundation, in consultation with others) for the most important discovery in physics, chemistry, and physiology or medicine, for the best effort to promote world peace, and for the best fiction work of “an idealist tendency.” The Nobel judges are most likely conventionally Christian themselves; nevertheless, we have such winners in literature as the religious skeptics Bjørnstjerne Bjørnson, Anatole France, John Galsworthy, Sinclair Lewis, Maurice Maeterlinck, Theodor Mommsen, Eugene O’Neill, Luigi Pirandello, Romain Rolland, G.B. Shaw, Rabindranath Tagore, William Butler Yeats, Bertrand Russell, José Saramago, Dario Fo, Nadine Gordimer, Claude Simon, Jean-Paul Sartre, Albert Camus, and Ernest Hemingway!

Also this week, we find on consecutive days a disappointing end of the world and an unbelievable beginning of the world…

Last Tuesday, October 22, but in 1844, was the date of The Great Disappointment. That is because on this date the world did not end. Baptist preacher William Miller had made meticulous calculations from the Bible – something Irish Archbishop James Ussher had done to calculate the date of the beginning of the world – and predicted that Christ would return on 22 October 1844. Miller’s followers, known as Millerites, having been alerted by speeches, sermons, billboards, posters, tent meetings, books, newsletters and newspapers, gathered in makeshift temples and on hillsides. Many had sold their property and possessions in anticipation of being “raptured” to heaven without going through the messy process of actually dying. But when midnight came, people grew restless. Some walked out. At about one o’clock one of the leaders rose and said, “I never did fix upon the precise time myself… I believe the most important thing after all is, to be ready. …” Miller’s followers had experienced what came to be called “the Great Disappointment.” But not only did the Seventh-Day Adventist Church rise from the ruins, but 167 years later the same disappointment, with a similar collection of gullible believers, was ushered in by radio preacher Harold Camping!

Last Wednesday, October 23, but in 4004 BCE, the world was created by God. It is disheartening to report that many Christians will leave it at that. The exact dating of the age of the earth was arrived at by an Irish theologian and Archbishop of Armagh, James Ussher, in his Chronologies of the Old and New Testaments, which was first published 1650-1654. Ussher arrived at his conclusion by careful counting of the “begats” in the Bible, and perhaps some divine guidance.

In spite of advances in Earth sciences, almost 46 percent of Americans (and 58% of Republicans) still believe that the world was created by God in its present form between 5,000 and 10,000 years ago! Incredibly and ironically, in an age of general literacy, universal education, and substantial wealth and prosperity in the United States, Young Earth Creationist fantasies persist!

Last Thursday, October 24, but in 1765, Scottish philosopher Sir James Mackintosh was born. By 1788, Mackintosh had settled in London, associated with and supported progressives there, and began writing in defense of the French Revolution: in April 1791, he published Vindiciae Gallicae, an answer to Edmund Burke’s Reflections on the French Revolution. Even Burke was impressed. His writing was so forceful and well received by progressives that Mackintosh not only made many friends (including Burke), he decided to drop medicine for law. He was knighted in 1803. By 1813, Mackintosh had become a liberal Whig Member of Parliament, and although becoming less radical as his career progressed, he participated in many reforms and served as a liberal until his death. Sir James Mackintosh was one of the society that met regularly at “Holland House,” a noted gathering-place for Whigs in the 19th century. In his Memoirs, Charles Greville quotes historian John Allen, popularly known as “Holland House Allen,” commenting on Mackintosh’s “declaration of religious belief on his deathbed, when he had never believed at all during his life.” In fact, his pious son, Robert James Mackintosh, failed to convert his father before his death in 1832, as he honestly recounts in his Life of the Right Honourable Sir James Mackintosh (1836). English jurist John Taylor Coleridge classed Mackintosh as an unbeliever with the likes of John Stuart Mill, John Tyndall, and Thomas Henry Huxley. In fact, Mackintosh lived and died a Deist.

Yesterday, October 25, but in 1400, the first great poet in the English language, Geoffrey Chaucer, died at his home in London. His date of birth is unknown, though it is probably around 1340. Chaucer became a celebrated poet during his lifetime. His most famous work, The Canterbury Tales, is a clever use of a pilgrimage to the shrine of Thomas Becket as a frame for poetic and prose tales. In it, Chaucer satirizes priests, monks and nuns. For example, the Summoner, a church official, tells his story about a friar who is taken down to hell, but sees no friars. None? Hardly! His guide shows them living inside Satan’s ass! The Pardoner tries to live a life of good works, which is a clever dig at the church: it was common knowledge that most clerics used their guaranteed income for a life of leisure. Chaucer himself doubted immortality and his satire may have masked agnosticism: Chaucer had been an ambassador to Italy and witnessed for himself the widespread disbelief in immortality there. Nevertheless, Geoffrey Chaucer is the first literary figure buried in what is now called the Poet’s Corner in Westminster Abbey. 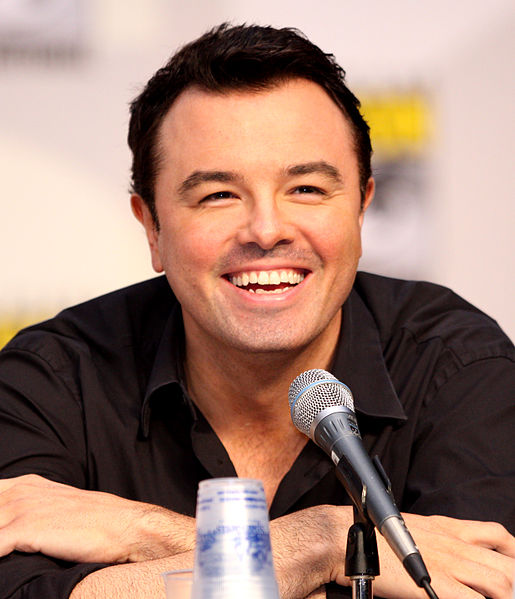 Today, October 26, but in 1973, American comedian and creator of the prime-time Emmy-winning satire “The Family Guy” (1999-present), Seth MacFarlane was born. He also wrote, directed, produced and voiced the title character in the 2012 comedy Ted, starring Mark Wahlberg and Mila Kunis. MacFarlane was named the Harvard Humanist of the Year in 2011 in recognition for “his active, passionate commitment to Humanist values, and his fearless support of equal marriage rights and other social justice issues.” On the February 19, 2010, episode of “Real Time with Bill Maher” (HBO), MacFarlane said he is an atheist, but that he has no problem with religious people in general. And in the entertainment magazine Steppin’ Out, Macfarlane said, “I do not believe in God. I’m an atheist. I consider myself a critical thinker, and it fascinates me that in the 21st century most people still believe in, as George Carlin puts it, ‘the invisible man living in the sky.’”

October 24: The Holy Roman Emperor, the French, the Spanish, the Dutch, the Swiss, the Swedes, the Portuguese and representatives of the Pope signed the Treaty of Westphalia, calling for “a Christian and Universal Peace,” thus ending the religious conflict known as the Thirty Years War (1648).

John Lennon (1940) It was on this date, October 9, 1940, that John Winston Lennon was born in Liverpool, England. John Lennon had working-class roots, but went to art school and loved popular music. Having gotten together with songwriting collaborator Paul McCartney, who introduced Lennon to George Harrison, and a drummer to be named later […]