Last Sunday, October 13, but in 1925, acerbic American comedian and social critic Lenny Bruce was born. Bruce grew up a tough Jewish kid who expressed his ethnicity with humor. He came to prominence in the 1950s and 1960s with his edgy, penetrating satire on taboo subjects such as racial fears, sexual fantasies, and, of course, religion. “If Jesus had been killed twenty years ago,” said Bruce, “Catholic school children would be wearing little electric chairs around their necks instead of crosses.” In a 1961 routine called “Christ and Moses,” an agitated Bishop Sheehan tells Cardinal Spellman about the unexpected appearance of Christ and Moses in New York. What to do about them? Today Bruce is considered a martyr to free speech. Bruce’s autobiography, suggested by supporter and Playboy publisher Hugh Hefner, and called How to Talk Dirty and Influence People (1965), inspired a play and a 1974 film. It was an Agnostic Lenny Bruce who said, “Every day, people are straying away from the church and going back to God.”

Last Monday, October 14, but in 1950, Unification Church founder Sun Myung Moon (문선명) was liberated by UN Forces from Hung Nam prison in Korea, where he had been incarcerated for espionage. He was 30 years old. Four years later, Moon founded the church whose followers are disparagingly but accurately called “Moonies” – as all of Moon’s followers believe Moon is the second coming of Jesus, the Messiah. Moon wrote his beliefs into a book, Divine Principle (1956), about the principle of the unification of mind and body. According to Moon, control of one’s eating, sleeping and sexual desire leads to salvation. Denying these three things, of course, makes minds easier to control, so the Moonies have often been charged with being a mind-control cult. Like most fundamentalists, Moonies despise the separation of church and state. And, like many millennialist Christians, Moonies hope for a Third World War, after which the world’s faiths will be unified and religion and government become one. This is at odds with American tradition and government, but many otherwise sensible conservatives supported him.

Last Tuesday, October 15, but in 1844, German philosopher Friedrich Nietzsche was born. Brought up by pious relatives, Nietzsche was educated at the universities of Bonn (1864-65) and Leipzig (1864-68), becoming a professor at the University of Basel, Switzerland, at the age of 25. He soon rejected the faith of his father and became a lifelong critic of Christianity. In his most famous work, Thus Spoke Zarathustra (1892), he writes, “God is a thought that makes crooked all that is straight…. Jesus died too soon. He would have repudiated his doctrine if he had lived to my age.” And in The Twilight of the Gods he wrote, “I call Christianity the one great curse, the one enormous and innermost perversion, the one great instinct of revenge, for which no means are too venomous, too underhand, too underground and too petty — I call it the one immortal blemish of mankind…. The only excuse for God is that he doesn’t exist.” Friedrich Nietzsche was an Atheist. Nietzsche’s idea of the Übermensch. or “higher man” (sometimes translated as “Superman”), which he conceived as a dynamic, perceptive person, was reinterpreted by the Nazis as the “master race” – a concept Nietzsche would have renounced like his friendship with composer Richard Wagner: He was neither anti-Semitic, nor a militarist, nor even a nationalist, as he renounced his Prussian citizenship in 1869!

Last Wednesday, October 16, but in 1854, Irish novelist and playwright Oscar Wilde was born. Wilde probably inherited from his feminist mother, by example if not by genetics, a flair for the dramatic: He adopted a personal style of outrageous dress – created by theater costumiers rather than tailors – and behaved just as flamboyantly. Wilde viewed all religions “as colleges in a great university,” but was attracted to Catholicism, to which he never converted, as “the greatest and most romantic of them.” From 1888-1895, Wilde wrote most of his important works: a semi-autobiographical novel, The Picture of Dorian Gray (1891), and five plays: Salomé (1892), Lady Windermere’s Fan (1893), A Woman of No Importance (1893), An Ideal Husband (1895), and what is considered his masterpiece of farce, The Importance of Being Earnest (1895). Wilde admired Jesus on the aesthetic level, but was skeptical of Christianity: “A thing is not necessarily true because a man dies for it,” he said. About the Bible, Wilde mused sadly, “When I think of all the harm that book has done, I despair of ever writing anything to equal it.” Asked once by Lord Balfour to describe his religion, Oscar Wilde replied, “Well, you know, I don’t think I have any. I am an Irish Protestant.”

Last Thursday, October 17, but in 1260, one of the finest examples of high Gothic art, Chartres Cathedral in northern France, was consecrated under King (Saint) Louis and Pope Alexander IV. It is known officially as Le Cathédrale Notre-Dame de Chartres. Surely, the Chartres Cathedral is an example of the quality of art inspired by religious faith? Such a romantic notion of the Middle Ages, as often taught in high school history classes, would be true if it could be demonstrated from history that periods of undisturbed religious faith coincided with periods of great art. Even a casual observer of the period would note that of course there was great religious art in the medieval era because the Roman Catholic Church was very wealthy and therefore employed the most talented artists! It must have started with the architects, but what do we really know about them? For example, the architect of the beautiful Speyer Cathedral in Germany was the Bishop of Osnabruck. He took religious orders only for the title and revenues and was described by contemporaries as “sensual and worldly.” The architect at Chartres was Béranger, but little is known of his religious faith, or if he had any at all. In fact, the Chartres Cathedral was constructed as a tourist trap: its very purpose was to attract pilgrims to patronize local merchants and fill church coffers with cash. Civic authorities candidly crowed that they just wanted to outshine, if not outspend, other cities. Was this religious passion, or the desire for donations? The most authoritative histories of the era confirm that the artwork was inspired by an economic revival and a concentration of wealth, not a religious revival or a concentration on Christ. Does religion inspire great art? If the Cathedral at Chartres is any example, the answer is – only when the inspiration comes in the form of gold coins! 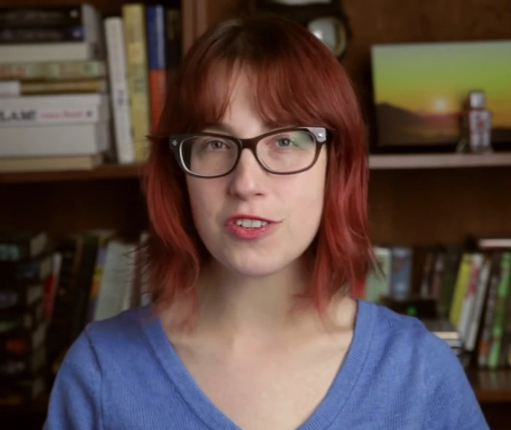 Yesterday, October 18, but in 1980, American blogger and podcast host Rebecca Watson was born. Sometimes known as “The Skepchick,” Watson is the founder of the “Skepchick” blog and, from 2006, co-hosts “The Skeptics’ Guide to the Universe” podcast. Watson grew up in New Jersey and earned a Bachelor of Science degree in communications from Boston University in 2002. Her interest in science grew after becoming a part-time magician in college and, after college, meeting magician and skeptical debunker James Randi. Watson currently travels around the world delivering popular talks on science, atheism, feminism, and skepticism. Although describing herself as an atheist and skeptic, the focus of Watson’s talks is invariably feminism – or the intersection of feminism and science. For example, she gave a talk at Skepticon 5 (2012) which was critical of Evolutionary Psychology (EP), a field which relies on many unfalsifiable hypotheses, from a feminist point of view, about which some scientists with credentials in the field of EP took issue.

In a “Point of Inquiry” interview (podcast 7/18/2011), host Chris Mooney encouraged Watson to explain her idea of the intersection of science, skepticism and feminism:

I go to a lot of atheist conferences, and skeptic conferences, and separation of church and state is discussed quite a bit. But it’s usually in terms of keeping prayer out of [public] school or stopping creationism from entering the science classroom. These are really important issues and I’m very glad that ‘our side’ is fighting for them. But there’s this other huge issue of religion getting into schools in the way of, for instance, promoting abstinence-only [sex] education or religion attempting to block access to contraception. … That’s a problem that feminist organizations are fighting and I think secular organizations should join that fight and make a stand. And some do.

Rebecca Watson has no academic standing in either science or feminism, but she is nevertheless quite good at attracting attention to herself and thus to her issues. She may not be a scientist, but even a fan of science can make good points if she does her homework. Watson is correct that more women are needed in the freethought/skeptic/humanist community. Watson herself may not be the best representative – one can agree with her feminist points of view without necessarily agreeing that she is the most articulate spokesperson for them – but at least she shows up. And if stirring the pot advances the cause, she is doing a service to the atheist/skeptical community. Demonstrating who the real enemy is, Watson says (”Skepchick,” May 2011), “Right now, the well-funded Religious Right lobby is working hard to convince our politicians to take away women’s rights based on nothing more than Biblical doctrine.” And in a 2008 YouTube interview, she explains her view that life is more meaningful without God—

Once I got rid of the idea that maybe I should be here serving a god, once that was gone, I think that I allowed myself to feel more meaning in what we have here. I think that that’s what is particularly beautiful about living a life free of God. ... When you ask about meaning, I think that the important revelation’s that we only get this one life and we have to help other people enjoy their time on earth here, too. I think that one of the tenets of humanism is that the important thing is … helping out your fellow man and making the world a better place, a heaven on earth, so to speak.

Today, October 19, but in 1784, English writer Leigh Hunt was born. Early on, Hunt developed a twin passion for poetry and politics and befriended other young poets who favored political reform, including Thomas Barnes, Henry Brougham, Lord Byron, William Hazlitt, Charles Lamb and Percy Bysshe Shelley. In 1822, Hunt traveled to Italy with Byron and Shelley and created a radical political journal called The Liberal, avoiding the danger that got him arrested in England. There were only four editions, but the first included writings from William Hazlitt and Mary Shelley. Leigh Hunt was a Deist, and strongly opposed Christianity, as evidenced in his Religion of the Heart. It has been suggested that Leigh Hunt was the model for Harold Skimpole in Charles Dickens’ Bleak House, but Dickens denied this. Indeed, Dickens described Hunt as “the very soul of honour and truth.”

October 13: Presumably on a Friday, King Philip IV (“the Fair”) of France arrested all of the Templar Knights (1307).