This Week in Freethought History (August 11-17)

Last Sunday, August 11, but in 1833, Civil War veteran, Illinois Attorney General and “Great Agnostic” Robert Ingersoll was born. The most eloquent advocate of Freethought in the 19th century, Ingersoll trained in the law before enlisting in the Union Army during the Civil War, where he was a Colonel in the cavalry and fought in the Battle of Shiloh. He was captured and paroled and later served as the first Attorney General of Illinois. From 1865 to 1899, in an age when public lectures were the equivalent of pop concerts today, he was the 19th century equivalent of a pop star. Ingersoll’s topics ran from Shakespeare and Burns to the Bible, religion and science. He also argued for the rights of women, workers and blacks, as well as for the theory of evolution. His anti-religious orations drew the biggest crowds – and he purposely gave them on Sunday and charged rock-concert prices. Ingersoll preferred to call himself an Agnostic, though he admitted there was little difference between that and Atheism. Audiences in nearly every town in America would hear such things as:

“It is contended by many that ours is a Christian government, founded upon the Bible, and that all who look upon the book as false or foolish are destroying the foundation of our country. The truth is, our government is not founded upon the rights of gods, but upon the rights of men.” And, “When the theologian governed the world, it was covered with huts and hovels for the many, palaces and cathedrals for the few. … The day of Science dawned, and the luxuries of a century ago are the necessities of to-day. … These benefits did not drop from the outstretched hands of priests. … They were not discovered by the closed eyes of prayer, nor did they come in answer to superstitious supplication. They are the children of freedom, the gifts of reason, observation and experience – and for them all, man is indebted to man.”

Last Monday, August 12, but in 1866, Spanish dramatist and Nobel Prize winner Jacinto Benavente was born. One of the most important Spanish dramatists of the 20th century, Benavente wrote over 170 plays, including The Passion Flower (1901), about corrupt provincial politics and The Malefactors of the Good (1905), about religious hypocrisy. His style of drama turned the contemporary form from formula to realism, melodrama to comedy. He was awarded the Nobel Prize for Literature in 1922. Like Spanish novelists Benito Pérez Galdós and Vicente Blasco Ibáñez, and most of Spain's leading modern writers in his time, he was a thorough skeptic. Benavente described himself as a materialist in the early part of his career. In his preface to the play Santa Rusia (Holy Russia, 1932), which pays wholehearted tribute to Russia, he particularly approves its rejection of all religion. It was Jacinto Benavente who said, “When one does not think what one says is when one says what one thinks” (“Cuando no se piensa lo Que. se dice es cuando se dice lo que se piensa”) and “I only fear my enemies when they begin to be right” (“Sólo temo a mis enemigos cuando empiezan a tener razón”).

Last Tuesday, August 13, but in 1926, Cuban revolutionary and politician Fidel Castro was born. Castro has outlasted 10 U.S. presidents. Although the Catholic Church has excommunicated him, Castro never repudiated the Church. Human Rights Watch claims Cuba has a poor record on religious freedom: the Catholic church lacks almost all access to the media, endures strict limits on the numbers of its clergy, and is barred from operating schools. But Cuba’s constitution guarantees the freedom to follow any God, or no God. In an interview published in 1985, Castro claimed, “No churches in Cuba were ever closed down – none of them. … [The church] was a rancid aristocracy… It is not with religion that there were problems, but with the religious institutions.”

Last Wednesday, August 14, but in 1925, American Pulitzer Prize-winning writer Russell Baker was born. Baker writes in his memoir Growing Up, that he lost his faith in God following his father's death: “After that I never cried with any real conviction, nor expected much of anyone's God except indifference, nor loved deeply without fear that it would cost me dearly in pain. At the age of five I had become a skeptic and began to sense that any happiness that came my way might be the prelude to some grim cosmic joke.”

One of the many burdens of the person professing Christianity has always been the odium likely to be heaped upon him by fellow Christians quick to smell out, denounce and punish fraud, hypocrisy and general unworthiness among those who assert the faith. In ruder days, disputes about what constituted a fully qualified Christian often led to sordid quarrels in which the disputants tortured, burned and hanged each other in the conviction that torture, burning and hanging were Christian things to do... 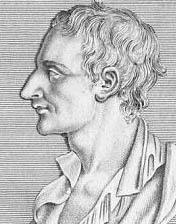 Last Thursday, August 15, but in 1750, French writer Sylvain Maréchal was born. Maréchal was an admirer of Jean-Jacques Rousseau, Voltaire, Helvétius, and Diderot, and connected with deist and atheist authors like himself, while developing his own ideas anticipating utopian socialism and communism. But after publishing pseudonymously a brilliant satire on the Old Testament, Livre échappé au déluge (Book salvaged from the flood), in 1784 he lost his library position. Forced to make a living by his writing, Maréchal published Almanack des honnetes gens (Almanac of honest people, 1788), which was ordered burned by the French Parlement and earned its author four months in prison. He accepted and enthusiastically supported the French Revolution and was editor of the newspaper Révolutions de Paris. In 1780, Maréchal aimed to replace religion with a cult of Virtue and Faith with Reason in his Fragments d'un poème moral sur Dieu (Fragments of a Moral Poem on God). He was influenced by French astronomer Jérôme Lalande to write the first Dictionary of Ancient and Modern Atheists (Dictionnaire des Athées anciens et modernes), published in 1798, in which for some reason he includes Augustine of Hippo and Blaise Pascal.

Yesterday, August 16, but in 1954, award-winning Canadian film director and screenwriter James Cameron was born. Director of The Terminator (1984), Aliens (1986), The Abyss (1989), Terminator 2: Judgment Day (1991), True Lies (1994), Titanic (1997), and Avatar (2009), Cameron has been nominated for six Academy Awards overall and won three for Titanic. Not only is Cameron an unabashed atheist, but he says in the 2009 biography The Futurist by Rebecca Meegan, “I've sworn off agnosticism, which I now call cowardly atheism.” Cameron continues, “I've come to the position that in the complete absence of any supporting data whatsoever for the persistence of the individual in some spiritual form, it is necessary to operate under the provisional conclusion that there is no afterlife and then be ready to amend that if I find out otherwise.” 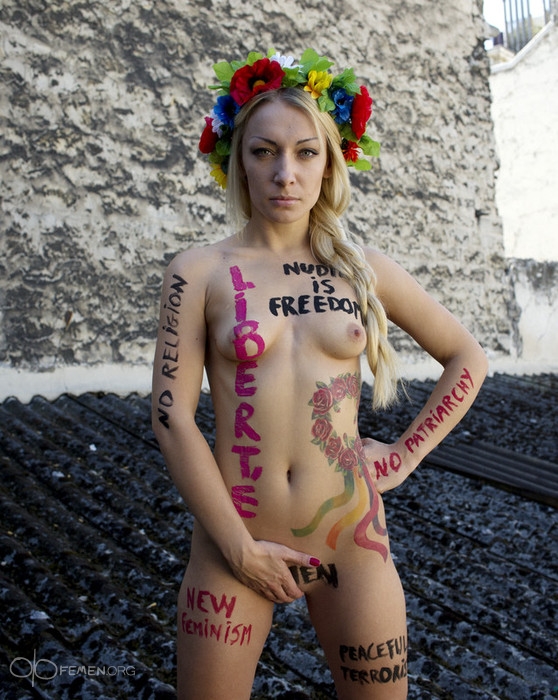 Today, August 17, but in 2012, a bare-breasted 22-year-old woman cut down a cross in Kiev, Ukraine, to protest Russian Orthodox Church influence in government. Inna Shevchenko (Інна Шевченко), wearing only red shorts and wielding a chainsaw, was assisted by two other members of Femen, a Ukrainian feminist protest group based in Kiev. The protest this time was in support of the feminist punk band Pussy Riot,* but the chief aim of Femen is empowerment of women everywhere through protest using “sextremism” against the patriarchy in all its forms: “the dictatorship, the church, the sex industry.” The Femen slogan is, “Our God is woman, our mission is protest, our weapons are bare breasts!”

Founded on 10 April 2008 by Anna Hutsol (Ганна Гуцол), who originally recruited women to protest the sex tourism that had become common in Ukraine, Femen’s trademark topless protests, always in public in front of cameras, wearing nothing above the waist but a flower wreath in their hair, did not start until 2010. Explained its website (in English), “This is the only way to be heard in this country. If we staged simple protests with banners, then our claims would not have been noticed.” Explained Inna Shevchenko, who was granted asylum in France after fleeing Ukraine, “… We are a democratic movement … an atheistic group motivated by secularism and humanism … our three basic postulates are democracy, atheism, and sexuality.”

Naked protest has a long history, but not one traditionally tied to feminism. Femen’s feminism, while running counter to “academic” feminism, has yet to be embraced by the proletariat. Neither is it highly regarded in the Muslim world, where the Muslimah (مسلمة‎, Muslim women) – either because they fear worse repression for supporting Femen or because they truly believe their second-class legal and social status is something of which to be proud – criticize Femen for being white, elitist and imperialist – as if freedom and self-determination are Western-only values. And feminism has always had to push back against religion, especially its stance against abortion.

Femen founder Anna Hutsol says, “There is no such thing as Orthodox or Catholic feminists or, most absurdly of all, Islamic feminists. It’s ridiculous. They are antagonistic ideologies; mutually exclusive.” Hutsol continued, saying that, given the historical abuses against women carried out in the name of religion, “all women are obliged to demand the destruction” of all religions. Controversial and confrontational in tactics, the topless feminism of Femen is neither unprecedented nor even ahistorical. In fact, Femen is justified in calling themselves a topless revolution: who can forget the signature 1830 painting by Eugène Delacroix from the French Revolution, a barefoot, bare-breasted woman leading the people forward over the bodies of the fallen: Liberty Leading the People? Liberty Leading the People to the Barricades

* Three members of Pussy Riot were to be sentenced later that day for “hooliganism motivated by religious hatred.”

August 12: the Martin Scorsese film “The Last Temptation of Christ” was released (1988).

August 17: President Bill Clinton give a secular confession in his “Map Room Speech”: Religion and Confession (1998).

Like most public figures during the post-Revolutionary Royalist reaction, Champollion was compelled to keep his religious opinions discreet.