Last Sunday, January 20, but in 1953, the “Piltdown Man” fossils were revealed to be a hoax. Touted by its discoverer, Charles Dawson, and its chief defender, paleontologist Sir Arthur Keith, as the long-sought “missing link” between ancient and modern hominids, Piltdown turned out to be a small hoax that took on a life of its own because the chief hoaxer died before he could confess! How did the hoax go on for 45 years? Very few genuine hominid fossils had been discovered up to World War I, so comparison was difficult. Dating tests were almost as primitive as the bones themselves. The validation tests that were executed, were incompetently done. There was confirmation bias among the scientists, who were hoping to find just such a fossil. The three who found the fossils were experts, but Dawson was an amateur archaeologist; Teilhard de Chardin was uncritically pro-evolution; and Sir Arthur Smith Woodward’s specialty was fossil fish. Dawson, the prime suspect in the hoax, died in 1916. But Woodward, another suspect, defended the find to his dying day. So did Chardin, who died in 1955, after the hoax was exposed.

The error was corrected from within the scientific community, so there is no cause for gloating by Creationists, who apparently believe, based on Genesis, that night and day were created before the sun was (Gen. 1:1-19), the earth was created before the stars were (Gen. 1:16), the entire earth was once engulfed in a flood (Gen 6:13-8:22), visual stimuli can cause genetic change (Gen. 30:37-39), and the sun (or the earth’s rotation) can be stopped with no inertial effects (Josh 10:12-13). Science sometimes gets it wrong – sometimes, as in the case of Piltdown, embarrassingly wrong – but the conclusions exposed by science are not written in stone.

Last Monday, January 21, but in 1853, feminist and freethinker Helen Hamilton Gardener was born. Influenced by Robert Ingersoll, Gardener became a popular feminist lecturer and writer of the 19th Century, blasting by example and scholarship the popular fancy that the female brain is inherently inferior to the male brain. She did not spare religion in her writings: “The bible teaches that a father may sell his daughter for a slave (Ex. xxx, 7), that he may sacrifice her purity to a mob (Judges xix, 24; Gen. xix, 8), and that he may murder her, and still be a good father and a holy man.” Elsewhere, Gardener wrote, “It is thought strange and particularly shocking by some persons for a woman to question the absolute correctness of the Bible. She is supposed to be able to go through the world with her eyes shut, and her month open wide enough to swallow Jonah and the Garden of Eden without making a wry face. … This religion and the Bible require of woman everything, and give her nothing. They ask her support and her love, and repay her with contempt and oppression.” In 1920, Helen Hamilton Gardener was appointed by President Woodrow Wilson the first woman on the U.S. Civil Service Commission.

Last Tuesday, January 22, but in 1788, English poet George Gordon, Lord Byron was born. He became radicalized and skeptical of religion during his student years at Trinity College, Cambridge. Although a Deist, Byron maintained a friendship with Percy Bysshe Shelley, an Atheist. As he wrote in an 1811 letter, “I do not believe in any revealed religion. I will have nothing to do with your immortality; we are miserable enough in this life, without the absurdity of speculating upon another.” And in his 1819 epic poem, Don Juan, Byron wrote, “Christians have burnt each other, quite persuaded / That all the Apostles would have done as they did.” Byron’s first major biographer says he was “to the last a sceptic.” Still, there was enough of the youthful radical in Byron to compel him to help the Greeks fight for independence. He caught a fatal chill in the effort and died on 19 April 1824.

Last Wednesday, January 23, but in 1783, the French novelist known as Stendhal was born Marie-Henri Beyle. He hated the Jesuit education provided by his pious aunt, so Beyle moved to Paris to study and to write. When the French Empire fell in 1814, he moved to Italy, which resulted in several love affairs and the travel book Rome, Naples et Florence en 1817, for which he first used his pen-name, Stendhal. Suspected of spying, Stendhal fled to Paris in 1821 to became a major novelist. His most famous works are The Red and the Black, about political and social conditions in France, and The Charterhouse of Parma. Praise from Flaubert and Balzac enhanced Stendhal’s reputation. Having seen its influence in Paris and as French consul in the Papal States, Stendhal was moved to say, “All religions are founded on the fear of the many and the cleverness of the few.” Prosper Merimée’s memoir of Stendhal, published after his death in 1842, quotes the novelist saying, “The only excuse for God is that there is no such person” (“Ce qui excuse Dieu c’est qu’il n’existe pas”). 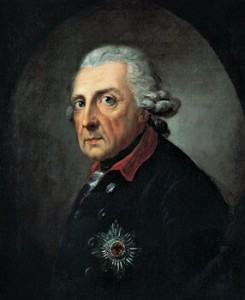 Last Thursday, January 24, but in 1712, Frederick the Great, or Frederick II, King of Prussia, was born. Frederick spent his youth under a harsh and pious father, for whom Frederick learned to hide his hatred. But when he came to power Frederick abolished serfdom within his domains, created a stable legal code, established a superior school system, allowed a free press and religious toleration – “All religions must be tolerated,” said Frederick, “… every man must go to heaven in his own way.” Frederick was a patron of art and literature (he befriended and protected Voltaire), as well as music. His court musicians included C.P.E. Bach and Johann Joachim Quantz. He played the flute and composed music that is still performed today. To his intimates, Frederick admitted his Atheism, but outwardly even a monarch could not profess such a thing. His letters, especially those exchanged with Voltaire, show his Rationalist side. In a letter to Voltaire, Frederick wrote, “Theologians are all alike, of whatever religion or country they may be. Their aim is always to wield despotic authority over men’s consciences. They therefore persecute all of us who have the temerity to unveil the truth.” It was Frederick who said, “There are so many things to be said against religion that I wonder they do not occur to everyone.” 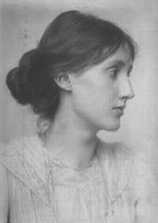 Yesterday, January 25, but in 1882, British novelist and feminist Virginia Woolf was born. Virginia Woolf was the central figure of the Bloomsbury Group and established herself as one of the leading feminist and modernist writers between the wars. She gave little thought to religion, generally. Biographer James King notes that Woolf “always remained a great admirer of the aesthetics of Roman Catholicism…,” an attitude that is characteristic of those, such as Oscar Wilde, to whom Church doctrines are repugnant: “Although she hated the arrogance of Christianity,” writes King, “she remembered that she had always been fond of its ceremonies.” Woolf despised the arrogance of Christianity and Christian doctrines. In a 1939 letter to Dame Ethel Smith, Woolf wrote, “reflecting upon my lack of what you possess – faith… how much more pervious to preaching your faith makes you than my lack?” And later, to the same correspondent, Woolf wrote, “How repulsive the Xtian [sic] religion as conveyed by the Xtian clergyman is…”

Today, January 26, but in 1564, Pope Pius IV, in a document called “Benedictus Deus,” ratifying the proceedings of the Council of Trent, instituted the ten rules for suppressing free thought and thereby created the Index of Prohibited Books. The Index Librorum Prohibitorum, as it is called in Latin, which is the language in which it was published, was last updated and published in 1948 (under Pius XII), and suppressed in 1966 (under Paul VI). But it is still considered a grave sin in the Roman Catholic Church to read any book considered by the authorities to be heretical. And why not? If people could read the Bible for themselves, they might notice the complete lack of biblical support for a priestly hierarchy! The real impetus for the Index and censorship was the rising Protestant tide and the dispersal of people the Church could not reach. It took another 15 years, until 1559, for the church to actually issue a list of prohibited books. The result of the Index, at least until the Age of Enlightenment, was not only a stifling of debate about religion, but a serious delay in the moral advance of civilization. And not only that, but the Index retarded Italian literature for over two centuries.

January 23: Boniface VIII (Benedetto Gaetano) was made Pope of the Roman Catholic Church (1295).

We can look back, but the Golden Age of Freethought is now. You can find full versions of these pages in my blog, FreethoughtAlmanac.com.