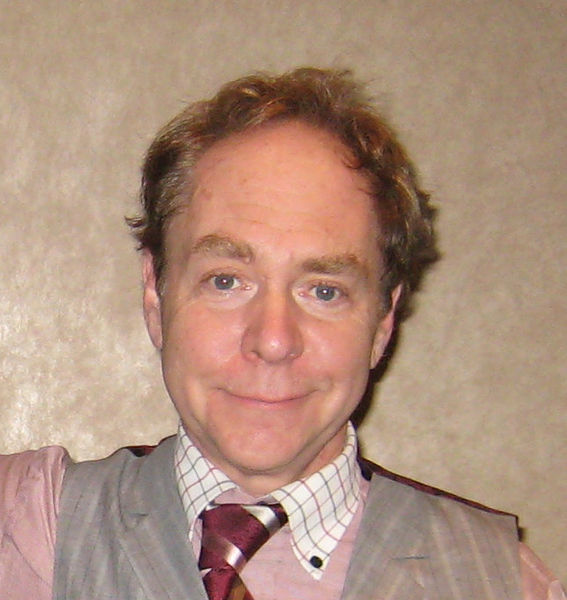 It was on this date, February 14, 1948, that the American magician and comedian known by the single name of Teller was born Raymond Joseph Teller in Philadelphia, Pennsylvania. In Teller's book, When I'm Dead All This Will Be Yours (2000), he claims his father was a depression-era hobo and cartoon artist. To hear Teller tell it, when he was growing up he had a natural love of reading and magic: he "wore a path from his boyhood home" to the Philadelphia Public Library, "where he spent countless hours, curled up in the theater and magic section, among what he lovingly refers to as the .791s."[1] He taught high school Latin in Trenton, New Jersey, and graduated from Amherst College, before taking to the street-corners to perform his magic tricks — he insists they are tricks, with no real magic involved — and in 1975 found his partner, Penn Jillette, who is tall and heavy compared to Teller's smaller, 5'9" (175 cm) frame.

If their association is an "arranged marriage," it certainly works well for the odd couple. When they're not performing at the Rio All-Suite Hotel & Casino in Las Vegas — performing what is described as "an edgy mix of comedy and magic involving knives, guns, fire, a gorilla and a showgirl" — they're writing another best-selling book like Cruel Tricks for Dear Friends (1989) and How to Play with Your Food (1992), or appearing on the Showtime cable series "Penn & Teller: Bullshit!" exposing frauds and fakes such as talking to the dead, alternative medicine, creationism, alien abductions and ESP.[2]

Teller is the non-speaking half of the Penn & Teller act, but they are both outspoken and often funny atheists. In a 2001 interview, Pete Moss asked Teller: "Being as how you spent your life saying God is a phony, would you still feel you have a valid claim to spend eternity in Paradise if you turn out to be wrong?" Teller replied, "Wouldn't want to. I can't play the harp and look fat in chiffon."[3]

In a 1998 interview, Teller was asked if even the most hardened Atheist has a need to believe and that even Atheists "search for some kind of personal answers for existence itself." After remarking that "Atheists do look for answers to existence itself. They just don't make them up," Teller went on:

... I might qualify as the most hardened atheist, and I have not the slightest need to believe in stuff that is not in some way verifiable. I believe in art, mind you. I don't believe that art is supernatural. I think that beauty and humor are wonderful things, and quite important to us — in fact, one of the major distinguishing features between us and some of the lesser species. My mother, who is 89 now, says "Oh, you know, I see these old people going to church, and I really envy them. It must be so consoling for them to be able to believe in that stuff." (Laughs) I think she genuinely envies people who are suckers in the sense that there are some things that might be a little easier to confront. It's not going to change her point of view, because it doesn't make any sense to her. It seems like nonsense. And it is! (Laughs)[4]

Teller and Penn, "a couple of eccentric guys who have learned how to do a few cool things," have appeared twice on Broadway, as well as on all the late-night talk shows, "Saturday Night Live," and as animated guests on "The Simpsons."

Teller's partner, Penn Jillette, tells of a 1998 appearance on Donny and Marie Osmond's syndicated talk show: "We were asked to do autographs for Donny and Marie. I wrote, 'There is no god,' and Teller wrote, 'He's right.'"[5]

Here’s your Week in Freethought History: This is more than just a calendar of events or mini-biographies – it’s a reminder that, no matter how isolated and alone we may feel at times, we as freethinkers are neither unique nor alone in the world. Last Sunday, May 20, but 206 years ago, my namesake, John […]