“Rebels in the Capitol! How did they ever get in?”

Now that the election and insurrection are over, I feel it is safe to write to you. What must you think today of your adopted country? Surely you must believe we are ruled by madmen and madwomen? The thought has certainly crossed my own mind!

It’s as if the quote from Gone with the Wind has been turned on its head: “Yankees in Georgia! How did they ever get in?” has become “Rebels in the Capitol! How did they ever get in?” Read “Racists,” “QAnon conspiracy theorists,” or “Fascists” for “Rebels” and you get a good idea of how some are pearl-clutching and hyperventilating. But these authoritarian types have always been hiding out in Congress. The Trump-roused riot of January 6 just gave the dark flowers some sunshine and oxygen – with a boost from the miracle manure of mainstream media and its credo, “If it bleeds, it leads.” 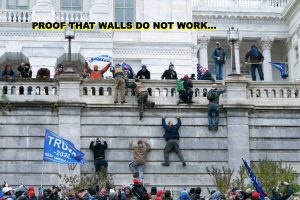 Welcome to America: land of the freak, home of the Atlanta Braves!

Truth to tell, our American brand of racism and fascism was always there, hiding just under the mendacious meniscus of democracy. The Right Wing have always been uncomfortable with rule by the δῆμος. Else, why would they want to prevent people from voting, via racist, classist vote suppression, or insist that the candidate who lost the election by seven million votes, affirmed by 50-60 court challenges, actually won the election and deserves to rule? Inasmuch as voting constitutes public opinion officially expressed, is there any more relevant repudiation of Trump and Trumpism?

I’ll answer my own question. There were 74,223,755 voters who thought otherwise. Since January 6, some of these voters may have changed their minds, horrified, as I was, by the insurrection at the Capitol. But not most, I suspect. And who could blame them? The national problems that caused the election of Der Orangeführer in the first place will not be solved by his successor – if his well-documented history is any indication.

On a lighter note, if you think America is in decline, have a care for the Greeks. Yes, the Greeks, the inventors of democracy! They see the emergence of “Greenglish” in their sacred language and note it with alarm.

But I’m sure the same argument about the rising tide of δημοτική can and has been made by the French, the Chinese – even the Russians! It’s cultural imperialism!

Or it is evolution.

“The greater part of progress is the desire for progress.” I don’t think the tragedian and philosopher Seneca the Younger had democracy in mind when he wrote this in his Letter 71 to Lucilius in the first century CE, but the evolution of language is truly democratic. I’m not sure it would be wise to stop it, even if we could!

As for the evolution of what remains of democracy in the US, if we ever had any here in the classical sense, I see a steady march toward ever-increasing state power. This is rightfully derided on the Right, but I’m not confident that it sufficiently repudiated on the Left. Bear in mind that the “Domestic Terrorism Prevention Act (DTPA) of 2021” was introduced this month in the House.

Even though, according to the FBI, laws already in existence are sufficient to punish the insurrectionists of January 6, some in Congress see the need for a “force multiplier” against domestic terrorism. As 135 civil rights groups have noted with caution, “The failure to confront and hold accountable white nationalist violence is not a question of not having appropriate tools to employ, but a failure to use those on hand.” Or, as I pointed out on Twitter a few days ago—

“Leftists supporting a new domestic terror law are like, ‘Sure, we know the Right will never use that against us!’ Like, ‘We can make peace with fascists.’”

My counsel is to be careful what we wish for. We might get it – along with unforeseen and unpleasant consequences. We should never make deals with the devil. Faustian bargains are a bitch.

NB: Дорогой = My dear [friend]; Ваш друг = Your friend. “Der Orangeführer” is my peculiar sobriquet for the 45th president.

It was on this date, November 4, 1960, that American comedian and actress Kathy Griffin was born Kathleen Mary Griffin in Oak Park, Illinois. At about age 18, she moved to Los Angeles to study drama at the Lee Strasberg Theatre and Film Institute, becoming a member of The Groundlings improvisational comedy troupe like her […]