The Problem with Joe Biden

I received a mailing (pictured here) from former Vice President Joe Biden. I admit, I live in a conservative voting district in Maryland, so it’s understandable that his appeal for donations was misdirected. I registered Independent three years ago, but I re-registered Democrat ahead of the 2016 Maryland primaries so that I could vote for the one candidate in my lifetime for whom I have attended a political rally. And donated money.

But I digress. Joe Biden wasn’t running in 2016. He is running in 2020. And he is running not only on his record, but on (former president) Barack Obama’s record. I believe it might be useful to point out that, for Joe Biden, there are a few problems with both records, problems that he and his supporters need to own—

• In 1991, at the Supreme Court confirmation hearing of Clarence Thomas, Mr. Biden gave Thomas the benefit of the doubt regarding sexual harassment allegations by Anita Hill. He refused to call corroborating witnesses on her behalf. Mr. Biden now says, “To this day I regret I couldn’t give her the kind of hearing she deserved.” He may have forgotten that, at the time, he was Chairman of the Senate Judiciary Committee. Now-Justice Thomas’s rebuttal, consisting of outrage rather than argument, was effectively echoed by Brett Kavanaugh 27 years later. Thanks, Joe.

• In 1995, Mr. Biden wrote the Omnibus Counterterrorism Act that later became the core of the USA Patriot Act – permitting secret evidence to be used in prosecutions, expanding the Foreign Intelligence Surveillance Act and wiretap laws, classifying “terrorism” as a federal crime (that could be invoked based on political beliefs), permitting the U.S. military to be used in civilian law enforcement, and allowing permanent detention of non-U.S. citizens without judicial review. In 2001, Mr. Biden completed his destruction of civil liberties by voting for the USA Patriot Act.

• In 1999, Mr. Biden supported the Gramm-Leach-Bliley Act that repealed the Glass-Steagall Act, effectively demolishing a Depression-era fire wall that had separated investment banks from commercial banks. With no legal limits on gambling with federally insured money, this paved the way for the 2008 financial crash. 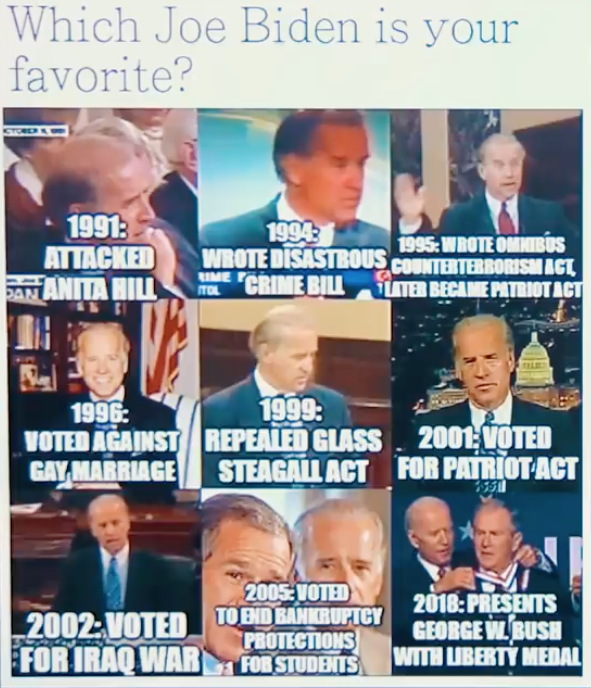 • Mr. Biden, since 2002 one of the Iraq War’s most enthusiastic backers, is currently the only candidate in the field to have voted for that illegal war. Worse, Mr. Biden fought against provisions that would have required President Bush to first win U.N. authority for an invasion, or else seek a war resolution from Congress, apparently forgetting that only Congress has war-making power.

• While Mr. Biden makes much of working “across the aisle” to get things done, in 2005, he voted with Republicans to end bankruptcy protection for students. Worse, as he said in a speech in May 2018, “I don’t think 500 billionaires are the reason we’re in trouble. The folks at the top aren’t bad guys.” Mr. Biden has a record reaching back to 1978 of making it more difficult for poor and working people to declare bankruptcy and get a fresh start. For corporations, however, no problem.

*There is more: While Joe Biden clings to the “Obama Legacy,” that legacy is tainted. Mr. Biden must own many more problems. As Barack Obama received more in campaign contributions from Wall Street sources than his Republican rivals during both the 2008 and 2012 campaign cycles, it should not be surprising that Mr. Obama’s economic policies were a continuation of the neoliberalism of his predecessor, George W. Bush. Joe Biden must own this.

• Mr. Obama made permanent Mr. Bush’s temporary tax cuts for the wealthy. He continued Mr. Bush’s bank bailout following the financial crisis of 2018 – and failed to put even one banker in jail. In fact, Mr. Obama instituted a process Noam Chomsky has called “socialism for the rich, capitalism for the poor.” Joe Biden must own this.

• Mr. Obama supported the secretly negotiated TPP (Trans-Pacific Partnership), a disastrous international deal that would have made investor profits supreme over national law, and scuttle environmental protections and labor regulations. Working-class hero Joe Biden must own this.

• Mr. Obama failed to shut down the illegal Guantánamo torture site and failed to prosecute anybody who committed “enhanced interrogation” (i.e., torture) in the pursuit of terrorists. Indeed, the torture, renditions and indefinite detention-without-trial initiated under George W. Bush continued under Barack Obama. Joe Biden must own this.

• Mr. Obama failed to shut down our forever wars. Indeed, he started a few of his own (even after winning the Nobel Peace Prize). He doubled U.S. troop numbers in Afghanistan, ramped up Mr. Bush’s campaign of covert drone strikes, doubled down in support of the two greatest human rights violators in the Middle East, Saudi Arabia and Israel, and played a hand in the coup against the democratically-elected government of Manuel Zelaya in Honduras. Joe Biden must own this.

On the contrary, instead of owning any of this, Mr. Biden has voiced not an ounce of regret over the Obama Legacy. 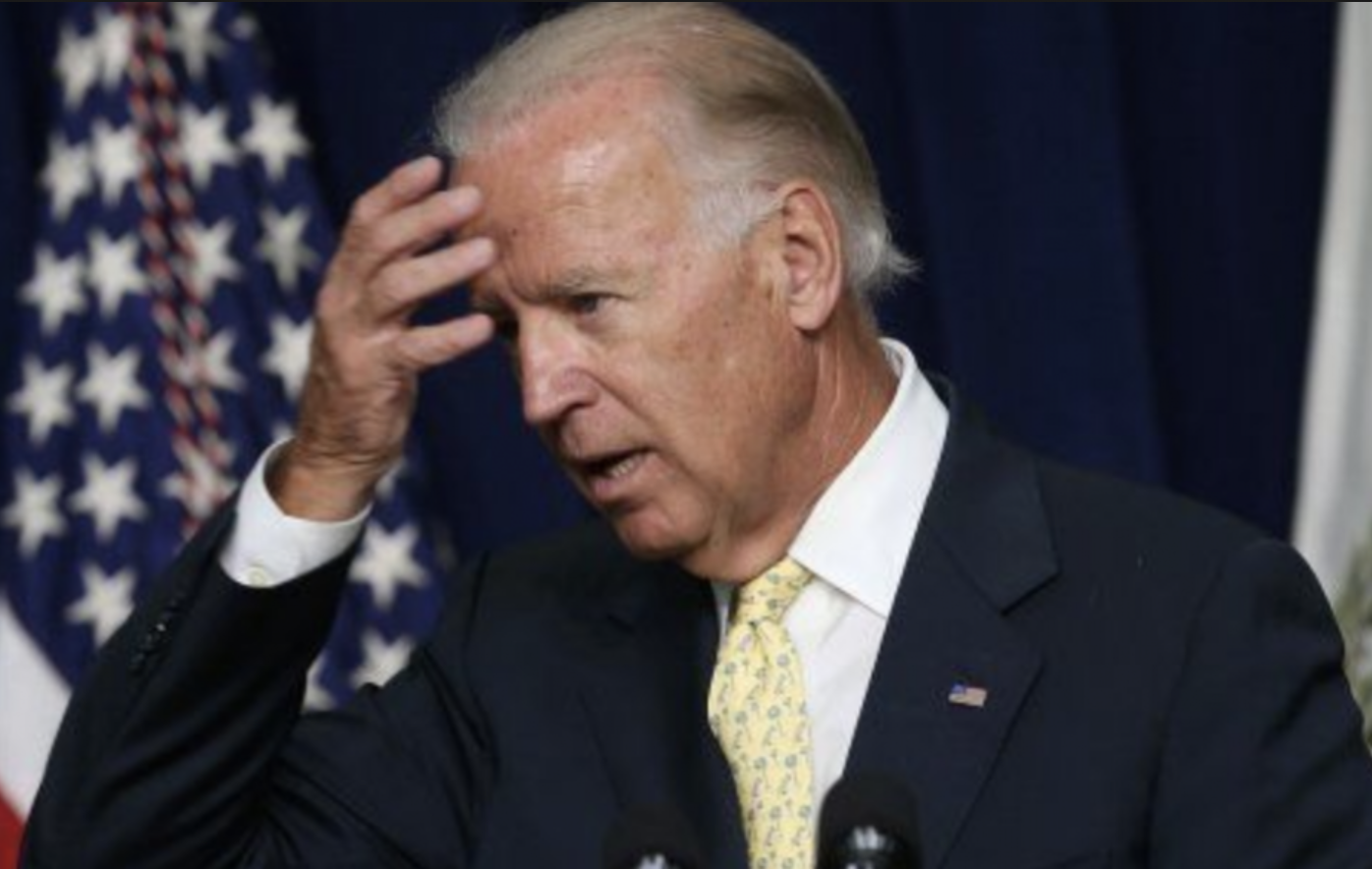 If that were not enough, there is this: Joe Biden is a two-time loser: In 1987, he quit the Democratic primary race within three months, after being accused of plagiarizing parts of his speeches. Mr. Biden dropped out in 2008, after coming in fifth in the Iowa caucus and winning less than 1% of the vote.

Yes, his current poll numbers are high, but they are declining. And with his inability to formulate coherent sentences and to recall basic facts, he is not just prone to gaffes. Although he never claimed to be a “very stable genius,” Mr. Biden, mentally, is quite clearly declining. There is no reason to believe former Vice President Joe Biden will even be in the race when the first primary season ballot is cast. That’s why the voices in Hillary Clinton’s head keep telling her to run; and that’s why Republican convert Michael Bloomberg wants to run: class solidarity. That is, any blue will do. Unless the blue is progressive.

Has the Democratic Party learned nothing from 2016? They still think they can win by running a corporatist against a populist? If we vote for Joe Biden, or anybody of his class, we all must own the fallout of a second term for Trump.

*Still more—
• In 1996, Mr. Biden voted for the Defense of Marriage Act, DOMA, which defined marriage as between a man and a woman. He also supported the Clinton-era “don’t ask, don’t tell” policy for gays in the military. He has since “evolved” on the issue, but not before great harm was done by his repudiation of gay rights.
• How about saving the Supreme Court from its rightward decline? As Counterpunch pointed out, “There will be one salutary effect of Biden becoming the Democrats’ nominee. It should obliterate the old sawhorse that, no matter how odious the candidate, we must hold our noses & vote for him because the future of the Supreme Court hangs in the balance. Clarence Thomas, John Roberts and [Samuel] Alito have their seats largely thanks to Biden, who was one of the ranking members of the Senate Judiciary Committee.” Joe Biden must own this.
• How about regime-change wars? On Venezuela, Joe Biden said, “The violence in Venezuela today against peaceful protesters is criminal. Maduro’s regime is responsible for incredible suffering. The U.S. must stand with the National Assembly & Guaidó in their efforts to restore democracy through legitimate, internationally monitored elections.” Joe Biden must own this.
Almost every statement in this quote is false or context-free. The protesters were not peaceful – they were counter-revolutionary thugs; the incredible suffering was caused by a drop in world oil prices coupled with crippling US sanctions originating under Obama and ramped up by Trump. As for the 2018 Venezuelan election, the opposition declined to participate and Maduro won a victory that was internationally recognized as more open and honest than the 2016 US elections!

"My personal position is simple. I have no living sense of commerce with a God," said James. "Religion, in short, is a monumental chapter in the history of human egotism."