TO: Thomas Edward Perez, Chair of the Democratic National Committee
FROM: Ronald Bruce Meyer, Citizen of the United States of America
DATE: September 8, 2019
RE: Your recent fundraising letter 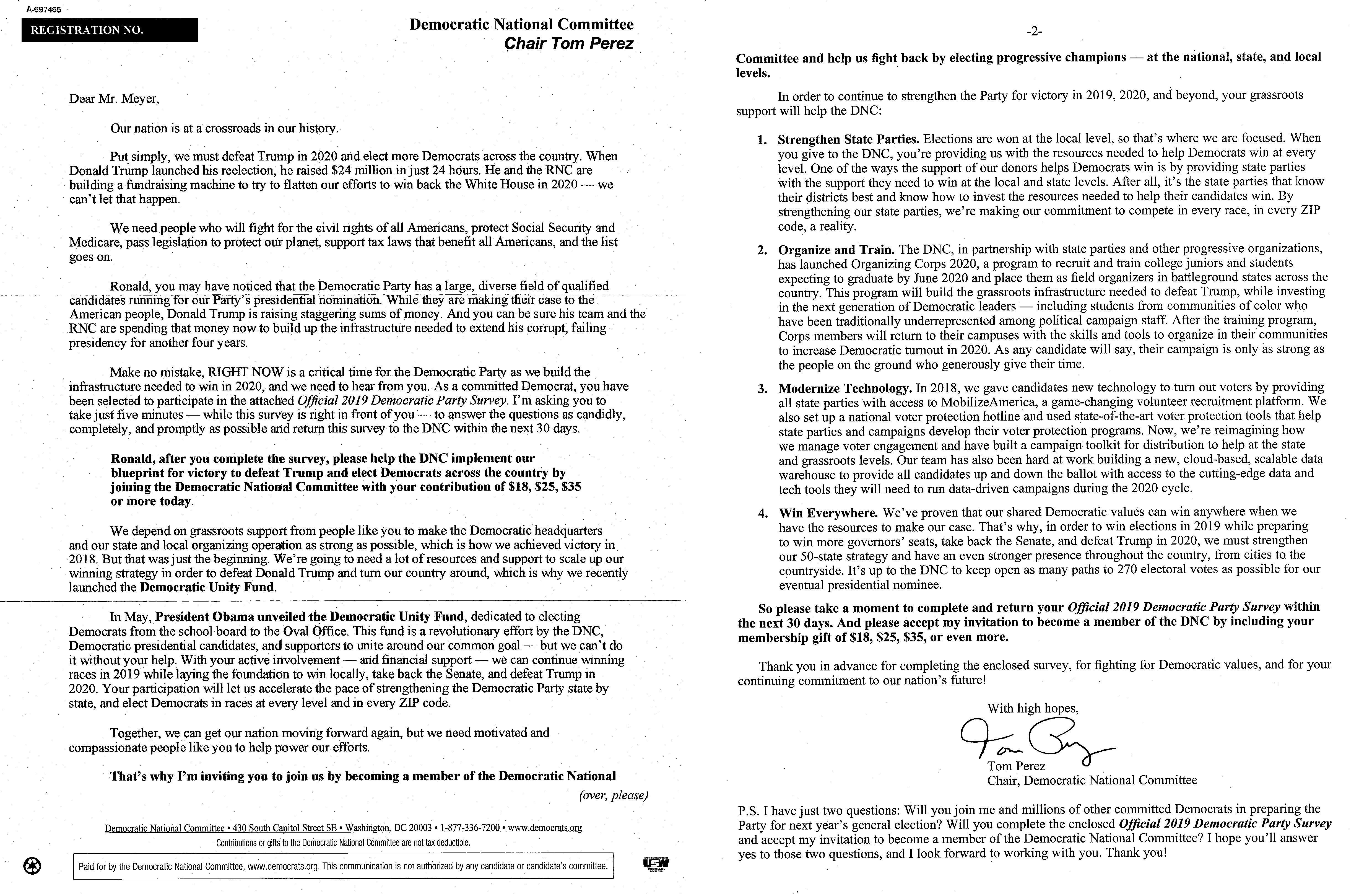 I feel your pain, Mr. Chairman. In your letter you say, “RIGHT NOW is a critical time for the Democratic Party…” Acknowledging that this is boilerplate fundraising language, I agree that defeating Donald Trump is important for the 2020 election cycle. But when I weed my garden, I have to plant something in place of the weeds or the weeds pop right back. Weeds are like that.

So are corporate shills and con-men.

So, when I read, “We depend on grassroots support from people…” without a hint of what the DNC stands for or, more important, what the DNC will fight for, I have trouble taking you and the DNC seriously.

You say you and the DNC want to “Strengthen State Parties…” Does that mean you won’t actively sabotage primary challengers, as your party is doing and has done in the past, when they happen to be both popular and uncorrupted by corporate donations? Do you even understand that when a politician takes a corporate donation, he or she is expected to do something for the corporation in return? Do you understand that in any other realm but politics, this would be called bribery?

I don’t want to be divisive within the party, but it seems from the opinions of your colleagues that there is never an appropriate time to criticize the Democratic Party. This works out well for incumbents, for sure, who never have to “evolve” on the issues. But it’s not so evident how it helps Democratic voters like me. And I have found that there is no empirical evidence supporting the assertion that intra-party rivalry – like between the progressive wing and the corporate wing of the party – actually benefits the Republicans. Likewise, there is no empirical evidence supporting the notion that the “centrist” policies you and your establishment colleagues support are the most popular policies with Democratic voters!

Your letter says you want my opinion on various topics. I’m happy to share, but I observe that the needs and concerns of the Democratic many are typically ignored in favor of the needs and concerns of the corporate Democratic few. I’m not making this up: the Gilens & Page study shows that the opinions of the bottom 90% of income earners in America have a “statistically non-significant impact” on legislation, but that economic elites, business interests, and people who can afford lobbyists hold major influence over policy.

Furthermore, 67% of Americans say that the Democratic Party is out of touch with the concerns of Americans like me. For example—

On the environment: The Speaker of the House calls aggressive action on human-caused climate destruction “The green dream or whatever they call it.” How can we take seriously a party that can’t take seriously the existential threat of our time? The cost of the climate bill offered by Sen. Sanders is in the trillions. Does the DNC not understand that the cost of inaction is death?

And Reuters/Ipsos polling shows 72% of Americans consider climate change to be a moderate, serious, or imminent threat. A January 2019 Yale University and George Mason University poll shows 69% of Americans are “somewhat worried” about climate change and 29% are “very worried.” Are Democratic leaders worried? Or are you and the DNC only worried that if you take climate destruction seriously, fossil fuel donors will cut off the money flow?

Let’s bring this home: The Democratic National Committee determined in August notto host a debate focused solely on climate change, despite a series of protests around the country led in part by youth activists with the Sunrise Movement. This was directly your (un)doing, Mr. Chairman, even though 64% of Democratic-leaning voters support a debate on this existential crisis. Please explain: In what sense is your party “democratic”?

On impeachment: In an August Monmouth University poll, 59% overall said Trump should not be impeached and compelled to leave office – which comes as Trump’s approval rating remains at 40% or below. The poll shows a clear partisan divide on whether the Democratic-controlled House Judiciary Committee should pursue an impeachment inquiry. While 39% of independents and only 8% of Republicans believe an impeachment inquiry is a good idea, 72% of Democrats support that idea – just not the Speaker of the House, who seems to live in the land of 28%.

On healthcare: Medicare For All is supported by 70% of Americans (85% Democrats, 52% Republicans, 66% Independents). According to government projections, if things stay as they are, by 2026, the combined health care spending by the private and public sectors is expected to reach $45 trillion. The projected cost of Medicare For All would be $25T to $32T over 10 years. That sounds like a cost savings to me. Are Democratic leaders listening to voters about Medicare For All? Or should you see a doctor to determine if corporate cash leads to hearing loss?

On education: Nearly 70% of millennials with student debt pointed to the $1.4 trillion student loan crisis as scarier than North Korea. In fact, student debt stifles the American Dream: it depresses home ownership, defeats automobile and large appliance purchases, delays childbearing. Polling suggests that 66% of Democrats either strongly support or somewhat support student debt cancellation; even 41% of Republicans agree. And overall, 87% of Democrats want their state to provide free tuition at public college or university to any academically qualified student. Are the Democratic establishment listening to the voters on education? Or does a cacophony of corporate cash drown us out?

On unemployment and jobs: While the official unemployment rate is 3.7 percent as of July 2019, and continues to drop, the number is deceptive. The official number doesn’t count those who have exhausted their unemployment benefits, those who are working part-time because they cannot find full-time work, and “discouraged workers.” A better measure would be the “Labor Force Participation Rate,” which was only 63% in July. I know you and your donors are fully employed. Where is the Democratic jobs program for the rest of us?

On immigration: Most Americans oppose the separation of immigrant families at the border, and a larger share of people than at any point since 2001 (70%) say immigration is good for the nation. And yet your members voted on a $4.6 billion border security appropriations bill, while the Speaker (aided by Chuck Schumer in the Senate) dropped any protections for migrant children in overcrowded border shelters – “a betrayal of our American values,” according to the Congressional Hispanic Caucus. Are the Democrats with the majority or with the Republicans on immigration reform?

On racism and criminal justice reform: 64% of Americans, in a Quinnipiac poll, say racism remains a major problem in the USA. Furthermore, polling shows 91% of Americans say the criminal justice system has problems that need fixing. And 71% say it is important to reduce the prison population in America – not just 87% of Democrats, but 67% of Independents, and 57% of Republicans, including 52% Trump voters. A majority of 84% believe that people with mental health disabilities belong in mental health programs instead of prison. 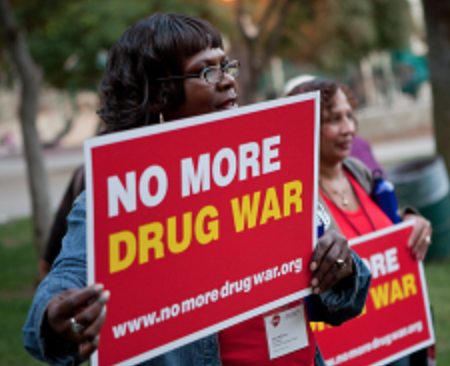 While the Democrats cower to the NRA on gun control issues, and every week there are preventable mass shootings, the USA has a murder rate that keeps us at Number One. Democrats fold under pressure from police organizations and continue to support a failed Drug War, which was designed to imprison black and brown people. Where are the Democrats on fixing racial disparities in American domestic policy? Where are the Democratic alternatives for criminal justice reform?

These are just some of the reasons, Mr. Chairman, that I cannot take you and the DNC seriously. And I heave a sigh when I reflect that you have learned nothing from 2016. For example—

And you will continue to lose, Mr. Chairman, if your organization continues not being a resistance by…

A piece of resistance 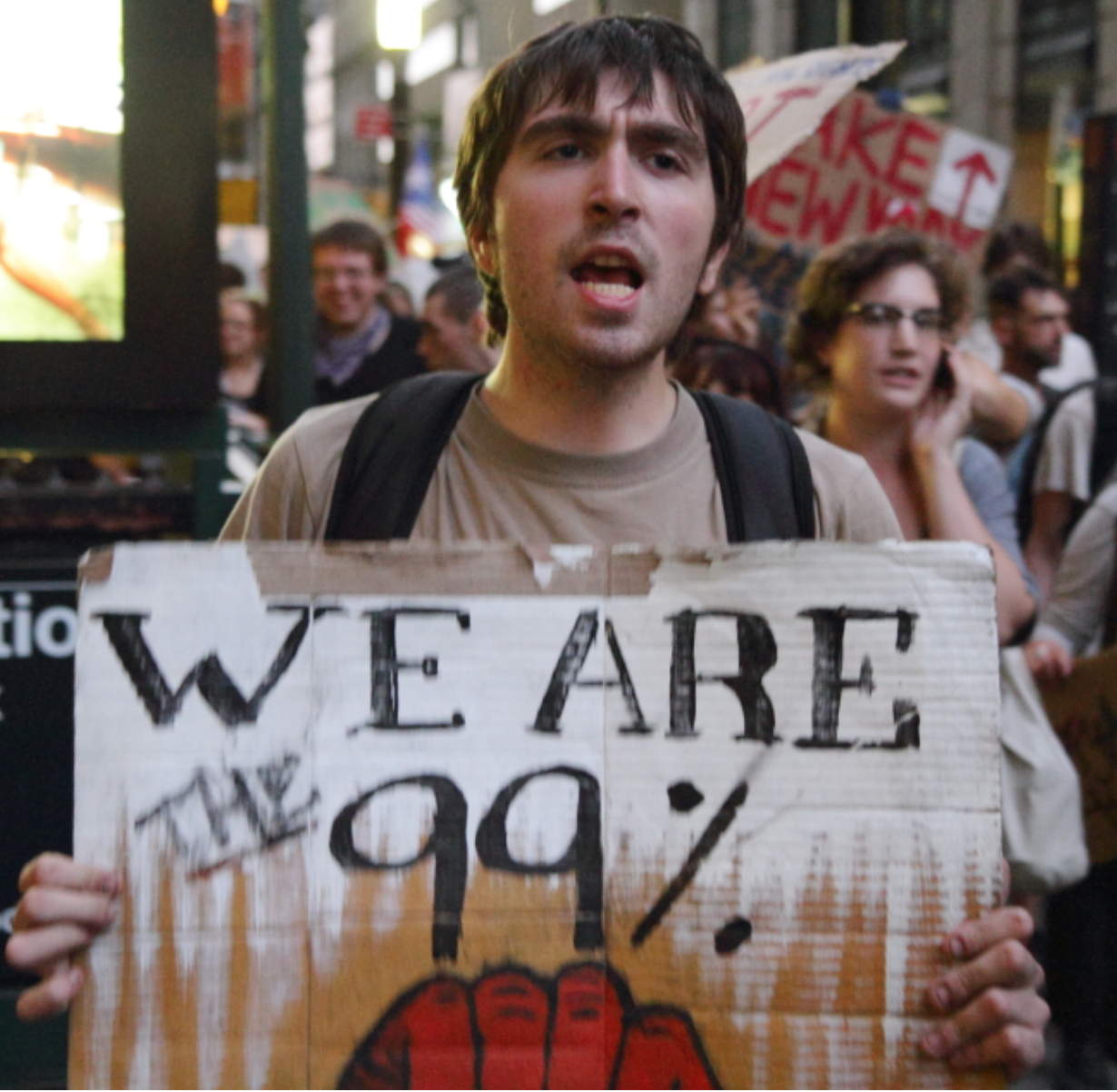 As for being resistance, I should point out that as of August 14, 2019, the United States Senate has confirmed 146 Article III judges nominated by President Trump. And I should remind you that the Senate is 49 Democrats and 51 Republicans: seeing as how Mr. Obama’s choice of Merrick Garland to the Supreme Court was stolen from him, why were almost none of the votes on Mr. Trump’s choices 51-49? And why did Democrats cave on Mr. Trump’s judicial nominations in favor of going on vacation in August 2019 – effectively surrendering an entire branch of government for generations?

If I understand the word, “Resistance,” it should be defined the way Republicans defined it under President Obama: uncompromising opposition. And I hope you understand that a single-minded focus on defeating Mr. Trump, while important – but without an agenda of your own – will leave the Democratic Party without a mandate after he’s gone. Failure to “replant” after “weeding” will guarantee that any Democratic victories will be short-lived. It is not enough to be against Trump; you have to be for something. You have to earn our votes. You have to give voters a reason to go to the polls.

We already have a Republican party. And we know what they stand for. You don’t want to be Republican-lite. Tell us: What Democratic policies will you fight for to bring voters to the polls?

In your PS, you ask, “Will you… accept my invitation to become a member of the Democratic National Committee?”

I’ll make a deal with you, Mr. Chairman. If I become a member of the DNC, will you and your party quit undermining progressives and Justice Democrats, who have vowed to work for their voters rather than for their donors?

Yes, I still hope to vote for candidates of the Democratic Party. I agree with you, Mr. Chairman: Right now is a critical time – for democracy. I just wish my party were more, you know, democratic.

Lamb was a complete agnostic from 1801, and from 1829 he was no longer even a Unitarian.