I’m sure you heard the news from last week that Jeff Bezos – founder, chairman, CEO, and president of a dotcom called Amazon – and his wife MacKenzie, announced that they are divorcing after 25 years of marriage. Since Bezos founded Amazon only 24 years ago, that counts as “community property” and should entitle MacKenzie, when they split, to half the wealth of the world’s wealthiest couple. 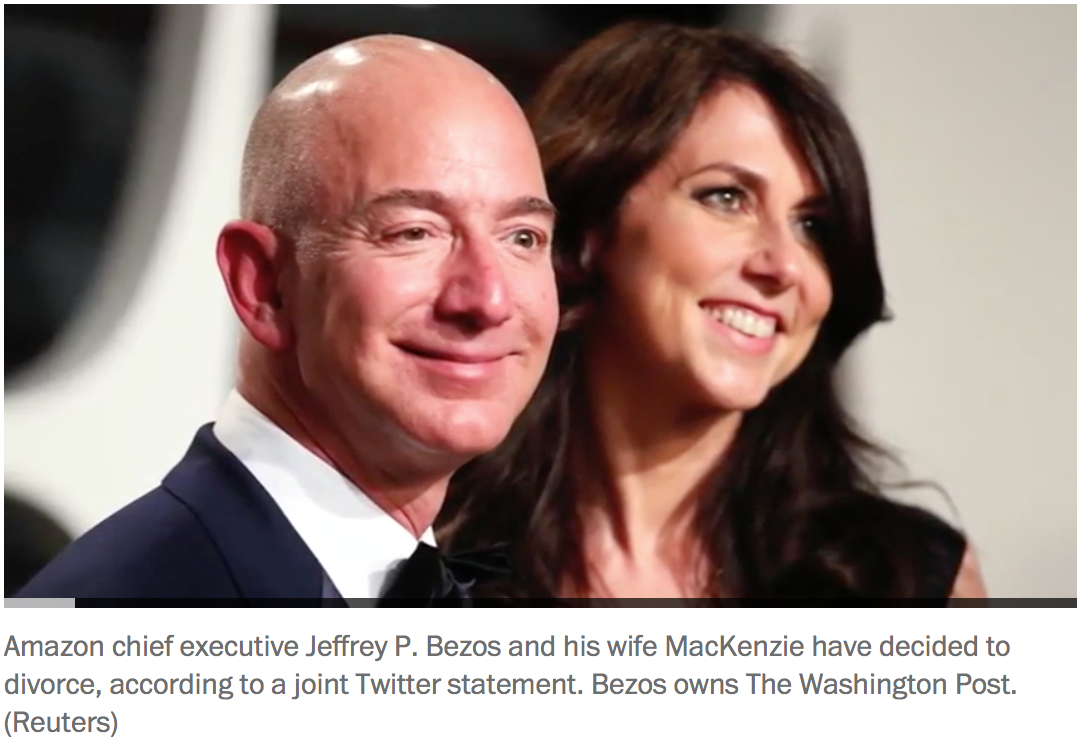 I read an interesting take on the divorce aftermath from a feminist writer, Jill Filipovic, published in The Guardian on January 12. Filipovic thinks it is right that “any assets accumulated during the marriage are communal and divided 50-50 if the marriage ends.” I don’t disagree with her conclusion or her rationale:

What divorces like these show us is how little we value the often invisible and unpaid labor that so many women do to enable their husbands to build wealth and find professional success. ... But would he [Bezos] have been able to have a stable, happy family and build a prosperous company without the work of his wife? ... MacKenzie, in other words, made significant sacrifices to make Amazon work. ... Her own career was stymied so that her husband’s could flourish. ... It’s rare that you see men making the “choice” to scale back their ambitions and radically decrease their earnings so that they can be home with their kids.

This is undeniable. And, as Filipovic points out, as if we need to be reminded, “We live in a capitalist country, and so we measure value with dollar figures.” So, does that mean that Jeff is worth more, or entitled to keep more, than MacKenzie?

Filipovic says no, and again I agree. But I think Filipovic fails to take her rationale to its logical conclusion.

What about the workers Bezos relied on to build and maintain his business? And I’m not talking about just the elite executives, but everybody from the stockroom staff to the sanitation slaves. Could the Bezos business thrive without them? Put another way, “would he [Bezos] have been able to have a stable, happy family and build a prosperous company without the work of his [workers]?” ... “[Bezos’ workers], in other words, made significant sacrifices [in income and health] to make Amazon work.”

I ask, what is a fair share of the wealth of the world’s wealthiest entrepreneur that he should share with the workers who made Bezos’ success possible? What is a fair distribution? Is it fair that his warehouse workers make maybe $15/hour and he makes $4,474,885/hour? Is it morally justified that Bezos should make 298,325 times what his warehouse workers do? Or could he squeak by on only 100,000 times what they make?

Or, put another way, do Amazon’s workers not deserve a living wage? If you still believe the world is divided between “leaders” and “lifters,” and that the rich got that way solely because they have worked harder, smarter and longer than the non-rich (in spite of clear evidence to the contrary), then this outcome, for both workers and ex-wives, will not surprise you: “Just watch,” Filipovic predicts. “If she goes for half, MacKenzie Bezos will be swiftly branded a gold digger.”

I might say Bezos doesn’t make the rules, he just enjoys them. (And he can tell his own side because he owns the Washington Post.) But when you accumulate wealth like a compulsive hoarder, that’s sociopathic. And then you tend to subscribe to the “Wizard of Id” parody of the Golden Rule: Whoever has the gold makes the rules. Or I might say, in answer to Bill Maher’s quip, in the character of Ebenezer Scrooge, “How much of my wealth does Mr. Tim feel he is entitled to?”: What makes you think it is your wealth?