Beauty in the Eye

The January 2019 issue of Baltimore Magazine has me perplexed. In this self-described Beauty Issue, all the “models” are beautiful (in my humble opinion), although it is a mystery why they are smiling without showing their teeth, as if Baltimore is not proud of the beauty of its dental work. 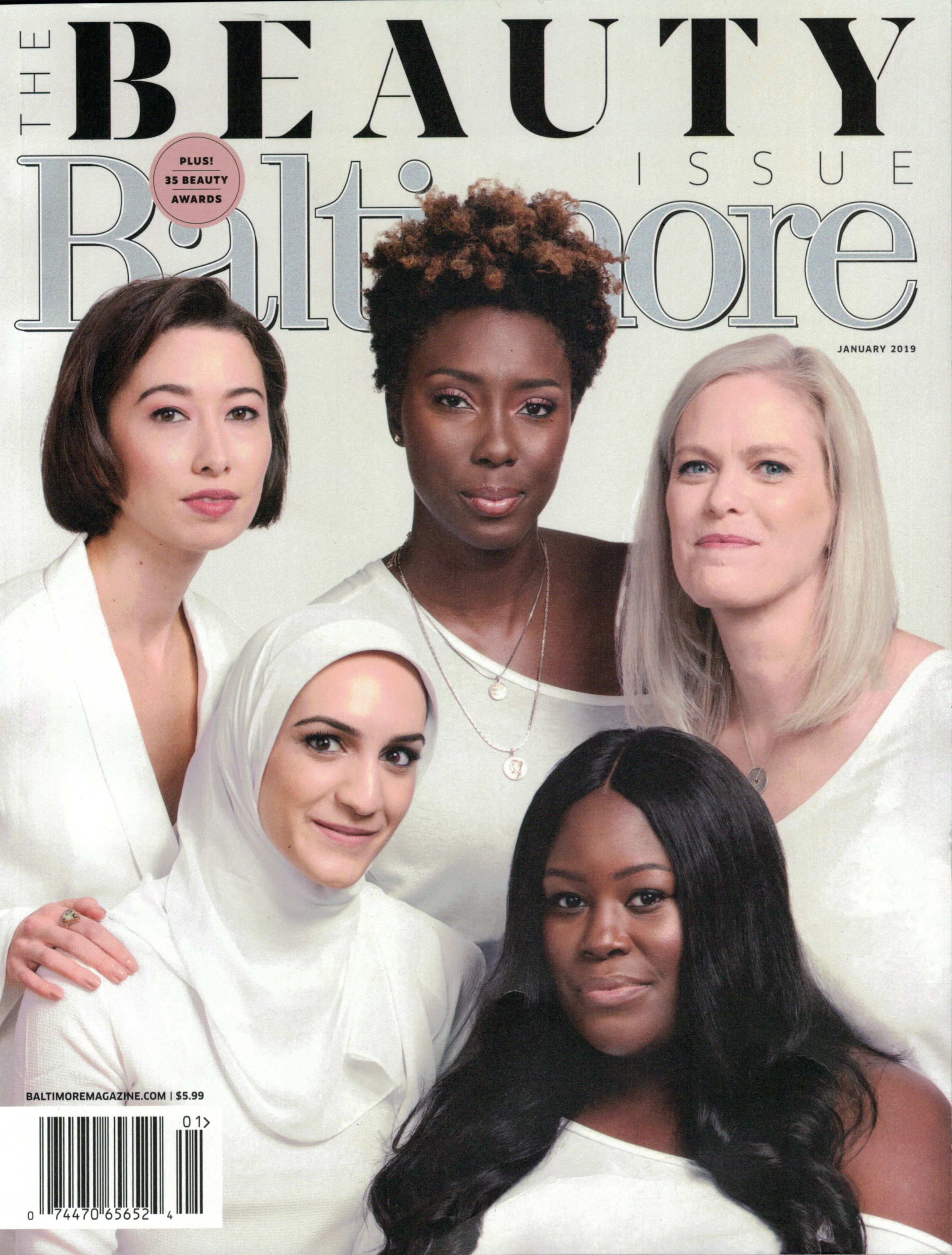 But that is not what has me perplexed. There is a white model, two black models (one delicately called “plus-sized”), and an Asian model, along with a fifth model of uncertain ethnicity. What seems “off” to me is the way they dress: all five models are dressed in white, but only four of them are saying, simply, “Look at me, I am beautiful.”

The fifth model, who not only shows no teeth but shows no hair because she wears a ḥijāb, seems to be saying, instead, “Look at me, I am Muslim.”

No other model feels it necessary to proclaim her religion; indeed, no other model is included to balance out the multiple religions of Baltimore. Only the woman wearing the distinctive and unmistakable sign of submission seems to be saying, “Islam is a race.” But Islam is not a race, it is a religion. So, again, why?

Never desiring to be accused of failing to read what I presume to criticize, a disease chiefly afflicting the right wing of the political flock, I did dive into the cover story. Edited by Lauren Bell, and beginning on page 84, her first question confirms my thesis that religion, when it comes to Islam, is being equated with race. Bell asks the round table of five women how their upbringing affects their ideas of beauty. The African-American entrepreneur/blogger Dayna Bolden decried being called “pretty for a dark-skinned girl.” Event planner Alexis Wilkins, the large, African-American woman, added that she hears, “You’re pretty for a plus-sized woman.” But then hijab-wearing Lauleh Aslani adds, “I used to get, ‘You dress really nice for a Muslim hijabi woman.’ [and] ‘You dress really nice for someone who wears a hijab.’”

To her credit, Aslani, Executive Health Coordinator at Sibley Memorial Hospital,* describes herself as American first, and recognizes being Muslim as her religion and being Persian as her ethnicity. But if Aslani is clear on the difference, what mixed message are the editors of Baltimore Magazine conveying to their readers? Clearly, they are conflating race and religion in the person of a Muslim woman, presumably in the service of being inclusive. But if the issue is beauty – and I have no quarrel with the fact of beauty inhabiting all shapes, sizes and ethnicities – are the editors saying “Contrary to popular belief, Muslims can be beautiful, too”? And, if so, why are they not saying “Jews can be beautiful, too”? Or “Christians can be beautiful, too”? If not, is the message not just a bit condescending? 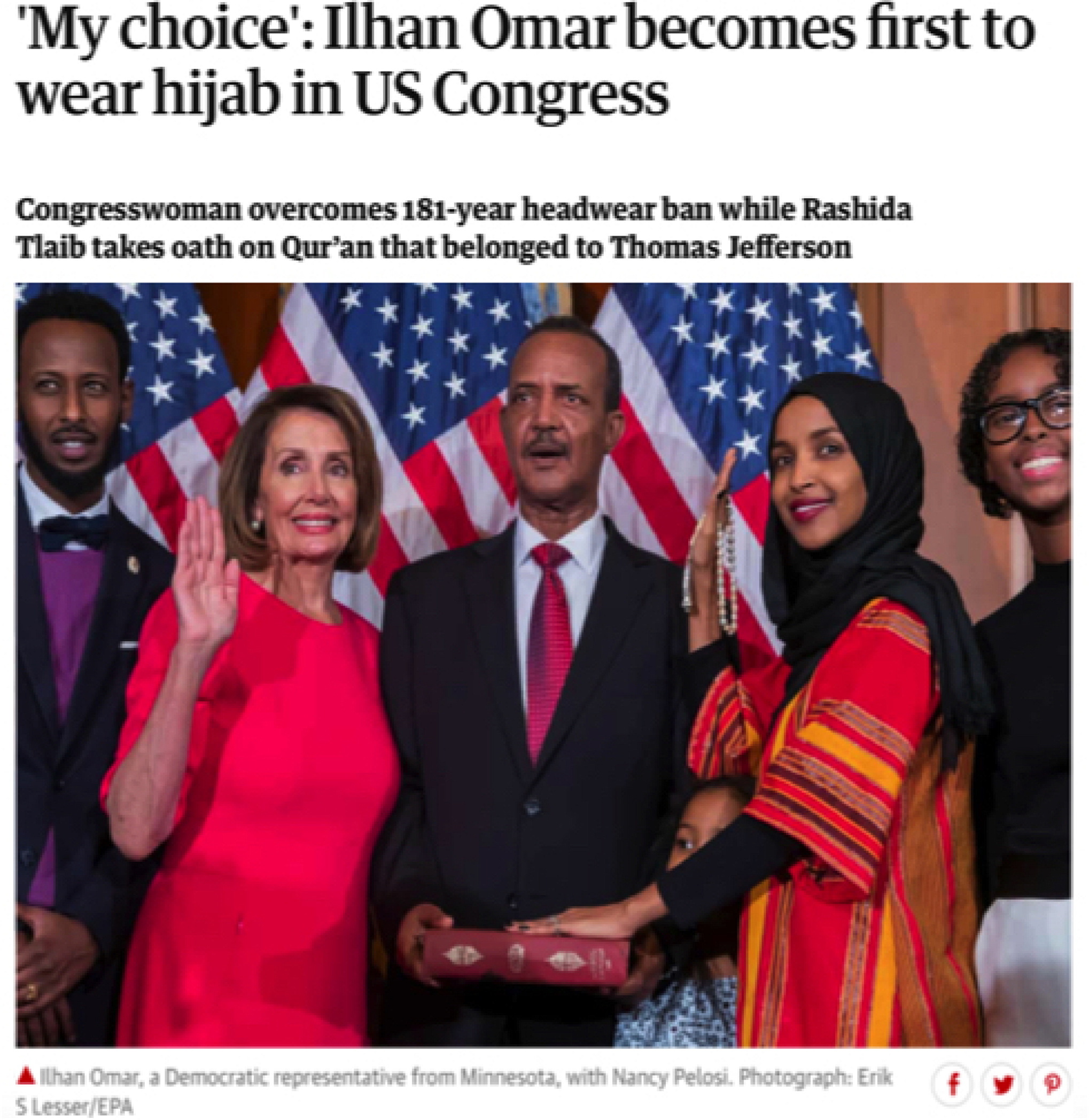 “No one puts a scarf on my head but me,” Ilhan Omar tweeted last November. “It’s my choice – one protected by the first amendment.” I’m sure she believes this. The first member of the US Congress to wear a hijab – the 181-year ban on headwear of any type in the House was lifted to accommodate her – left a refugee camp in Kenya in 1995, when she was about 14. Fourteen years of religious indoctrination works just as well on Christians, too.

It can be argued that a “Beauty Issue” is a superficial way to promote Baltimore, Maryland, my beloved home town. Subverting this objection, all the women modeling on the cover are identified within the magazine as professional women, too. And, to clarify my position as a secularist, I have no objection to discussions of Islam (or any religion) or the depiction of Muslim women on the covers of magazines. What seems “off” to me, as I asked before, is why religion is being conflated with race/ethnicity in a magazine article about concepts of beauty?

As I said, I am baffled, puzzled, bewildered – perplexed, if not vexed.

- - -
*Sibley Memorial is affiliated with Baltimore-based Johns Hopkins Hospital, but is geographically located in Washington, DC. So, this quibble: Could Baltimore Magazine not find any Persian/Muslim/hijabi professional women who actually work in Baltimore?

In opposing religion in the Irish Constitution, Yeats said, "Once you attempt legislation on religious grounds, you open the way for every kind of intolerance and religious persecution."