I presume from the source (Fox News) that this is meant to demonstrate that guns are no worse than knives; that if you take away guns, the criminals will still kill, only with knives. 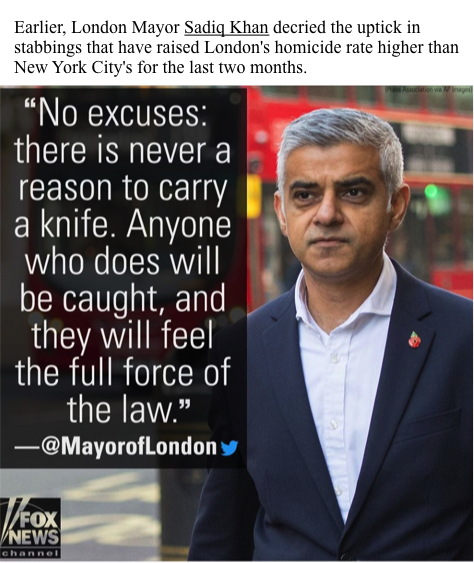 The logic is flawed: you cannot kill 17 people in seven minutes with a knife; only a gun can do that. If the homicide rate was higher in London than in New York City, isn’t that a testament to the efficacy of strict gun laws in the largest US city, rather than some comment on the relative deadliness of knives? Furthermore, knives have a purpose beyond killing PEOPLE; high-capacity, rapid-fire guns do not. And nobody is advocating taking away all guns (that is paranoia); we are advocating sensible gun control.

Yes, London has strict gun control laws. But, according to news reports, the rise in knife attacks in London has more to do with the drug war in the UK than with any inefficacy of gun control.