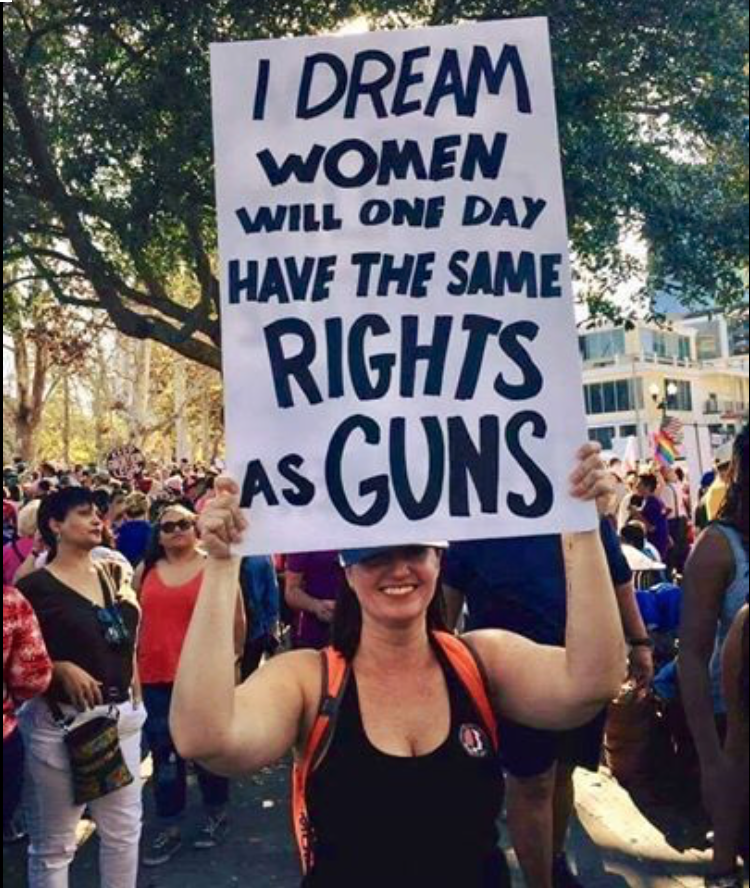 “I Dream One Day Women Will Have the Same Rights As Guns” says the sign held up at the Women’s March on Washington on January 21, 2017. Of course, it’s a ridiculous argument on its face, given that inanimate objects don’t have rights. Granting that the sentiment was inelegantly stated, does it have any merit?

Gun rights fundamentalists would say women in the USA enjoy more liberty now than at any time in human history and that, conversely, the freedom to own guns is constantly under attack and more restricted now than in the past. Both points are quite a bit overstated.

But if we give full credit to the woman holding the sign, we have to admit that while inanimate objects don’t have rights (or responsibilities), their owners do—and that that is the inequity she was protesting. For example, Florida’s “Firearms Owners Privacy Act” prohibits physicians from inquiring about patients’ gun use and/or ownership—a “physician gag law” pitting the community’s concern about public health against some unwritten and previously unknown individual gun owner right to privacy.

Yet, if a woman seeks an abortion in Florida (as in many states), somehow the community’s rights are more important than an individual’s rights. The Affordable Care Act (ACA or “Obamacare”) can only cover abortion if the woman's life is endangered (or rape or incest); the parent of a minor must be notified before an abortion is provided; a woman must undergo an ultrasound before obtaining an abortion; the provider must offer her the option to view the image; there is a 24-week cutoff, after which an abortion can be performed only if the woman’s life or health is endangered.

We don’t see any similar restrictions on gun ownership. Indeed, many members of Congress are willing to assure the rights of gun owners, but not necessarily those of women: the ACA includes a section entitled “Protection of Second Amendment Gun Rights” that guarantees rights to gun owners, while denying privacy rights to women. Furthermore, in spite of the statistical evidence of the dangers of gun ownership, the ACA also prevents insurers from counting gun use as a risk factor in setting health premiums.

Another example: while the USA is one of only three countries that offer constitutional protection to gun owners (that hallowed but much-misinterpreted Second Amendment), 131 other nations explicitly guarantee gender equality in their constitutions. But not us. As for equality under the law, the late (unlamented) Supreme Court Justice Antonin Scalia authored the opinion in Walmart v. Dukes, which decided that women did not have standing to sue for equal pay because they didn’t have enough in common.

What does this mean in practical application?

Take the case of Jessica Gonzales, a Colorado mother whose three children, ages 7, 9 and 10, were abducted and shot to death by her husband. The husband had a protective order against him, but the police refused to enforce it—saying it was a privacy issue. Gonzales sued the police department. When the case reached the Supreme Court, in 2005 it was decided that this mother of three dead children had no constitutional right to protection from law enforcement. Indeed, in the first case brought by a survivor of domestic violence against the USA before an international human rights tribunal, the Inter-American Commission on Human Rights (IACHR) found that the United States violated the human rights of Jessica Lenahan (née Gonzales) and her children.

Still think women have more rights than gun owners? The risk of a woman being murdered in a domestic violence situation increases 500 percent when there’s a gun in the house, according to a study by the American Journal of Public Health.

Last point: in August 2014, U.S. District Judge Myron Thompson made explicit the contrast of women’s rights vs. gun owner’s rights: in a decision preventing Alabama from enacting a harsh anti-abortion law, Thompson pointed out that a policy limiting firearm sales to just two cities probably wouldn’t be very popular among gun enthusiasts, but that is what would happen to constitutionally protected abortion rights for women under the proposed abortion restrictions.

“The right to abortion cannot be exercised without a medical professional,” wrote Thompson, “and the right to keep and bear arms means little if there is no one from whom to acquire the handgun or ammunition. In the context of both rights, the Supreme Court recognizes that some regulation of the protected activity is appropriate, but that other regulation may tread too heavily on the right.” 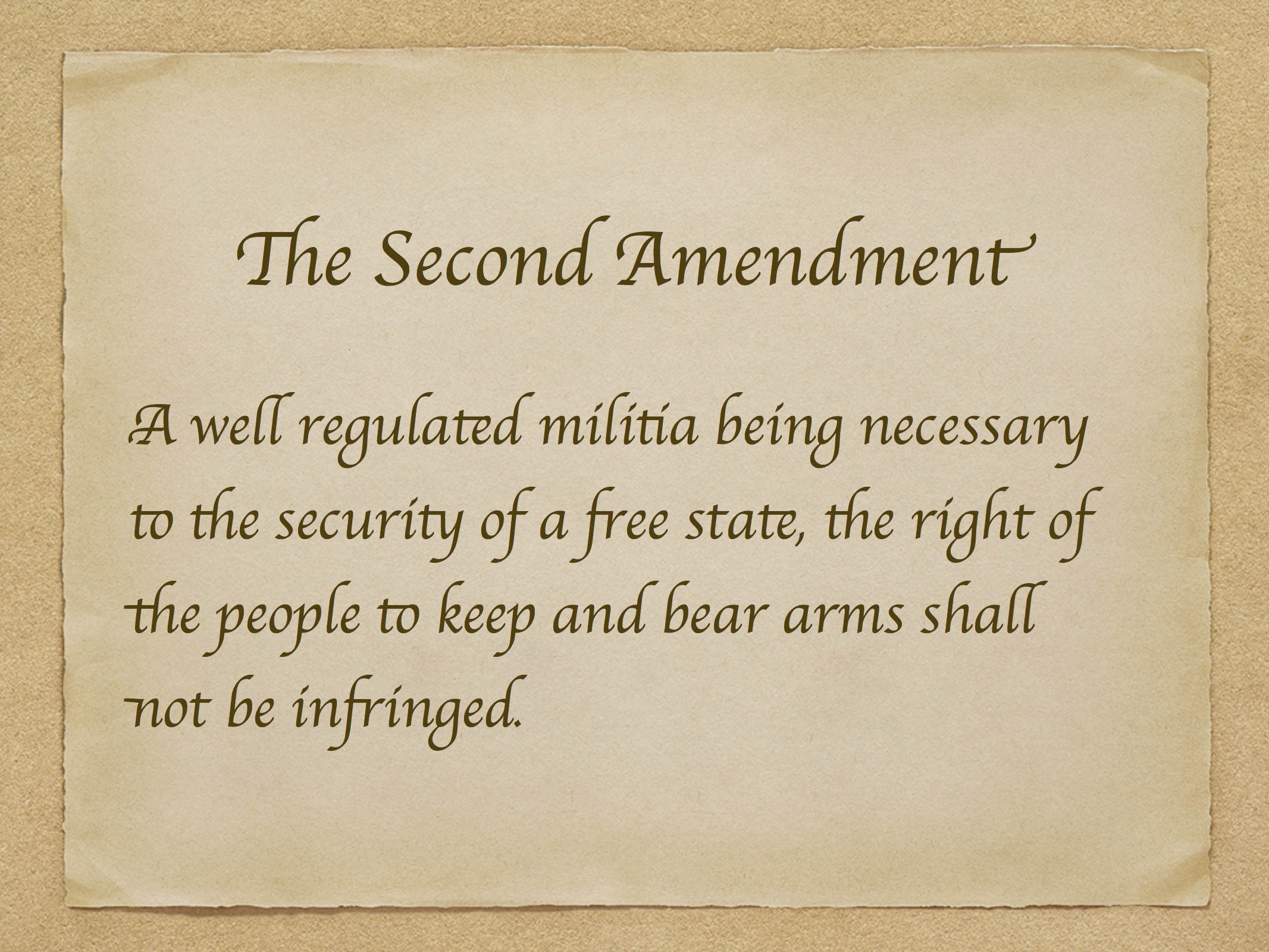 Indeed, between 2011 and 2013, states passed more anti-abortion laws than during the previous decade. These laws restricted abortion access for an estimated 9,000,000 women of reproductive age living in the South. But it got even easier to own and carry a gun during that time. Since the mass shooting at Columbine High School in 1999, Congress has passed just one major law that strengthens regulations on firearms. There are more waiting periods to get an abortion than there are to buy a gun.

Still think the protester in the picture is wrong? Then maybe prospective gun purchasers should be subjected to comprehensive background checks, mandatory counseling sessions, mandatory waiting periods, forced psychological counseling, and regulations on where, when and how to buy firearms—in the only two shops legally allowed to operate in the state.

PS: To those of you who decry my contrast of gun rights with abortion rights (which are just as legal under current U.S. law), what is the small-government “conservative” obsession with regulating the bodies, lives and choices of women? Especially if you are a man, it is literally none of your fucking business!

Hitchens says, "I'm an atheist. I'm not neutral about religion, I'm hostile to it. I think it is a positively bad idea, not just a false one. And I mean not just organized religion, but religious belief itself."