This meme is arguably about gun control. It seems to be saying that, were it not for private ownership of guns by Vietnamese civilians, North Vietnam would not have defeated the USA and our allies. Objectively speaking, North Vietnam won the Vietnam War: On 29 March 1973, the last U.S. combat troops left Vietnam as part of the Paris Peace Accords. On 30 April 1975, as acting President General Duong Van Minh and his cabinet surrendered to the Communist forces unconditionally in the Independence Palace, Saigon, the Vietnam War which had lasted for nearly 20 years finally came to an end. 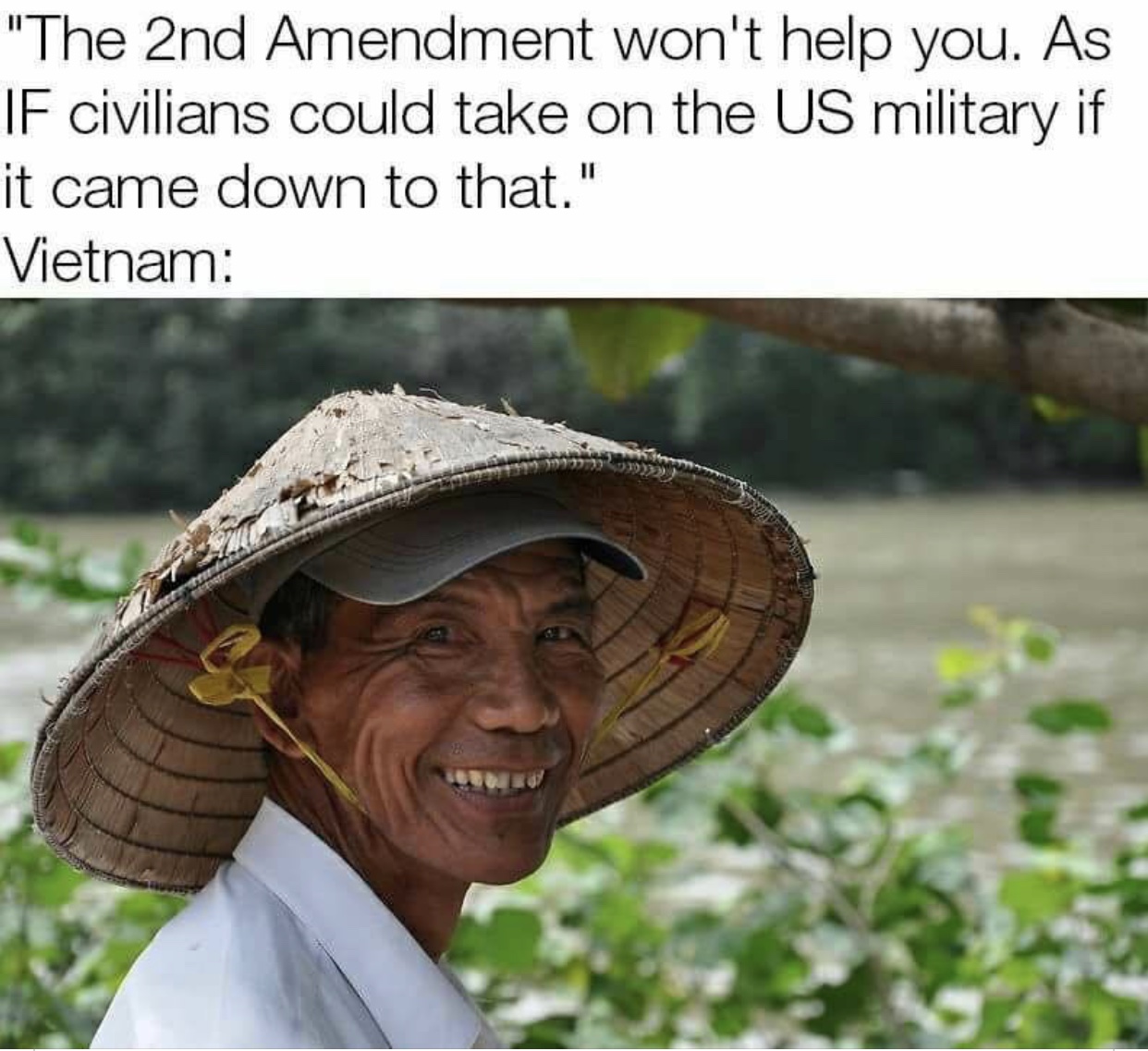 It is true that North Vietnamese peasant farmers were often equipped with modern arms either from Soviet bloc or Chinese sources—which is sensible, as civilians were often targeted or collateral casualties in the war. However, the civilian defense forces were no match in a fire-fight for the well trained, well-armed U.S. forces.

To the North Vietnamese, this war was a resistance to a foreign invasion. The Viet Cong (VC) and the North Vietnamese People’s Army of Vietnam (PAVN) were supplied with military-grade arms left over or captured from U.S. and French forces, supplied by the Chinese, or supplied by the Russians. Civilians were important for cover, for transportation (often drafted or impressed for this purpose) and for construction labor. These were the decisive defensive weaponry in the Vietnam War, joined with guerilla warfare tactics and the grit of a people defending their homeland—with a lot of “proxy war” help from China and Russia.

A post-war analysis of the decisive factors in the North Vietnamese victory concluded: “Subsequently the Communist Vietnamese leadership outlasted America's eight-year combat effort in Southeast Asia, and finally reunited Vietnam by force of arms. A major factor contributing to their success was the remarkable logistical support they created in an integrated network of bases, sanctuaries and lines of communication. Indeed the sanctuaries gave them the trump card that enabled them to fight a protracted war and outlast the United States commitment to the Republic of Vietnam.” (The BDM Corporation, “A Study of Strategic Lessons learned in Vietnam,” 1979)

But that private ownership of guns by Vietnamese civilians was decisive in forcing the withdrawal of the U.S. from military operations in Vietnam—or even that such a thing as “private” ownership of guns existed in the communist North—is not supported. The meme is senseless.