A few days ago, I discovered a meme calling itself a Statement of Beliefs.

Then I thought, “This a lot to unpack, but I believe I will give it a shot.” I copied the meme to this page. Here’s my take on it— 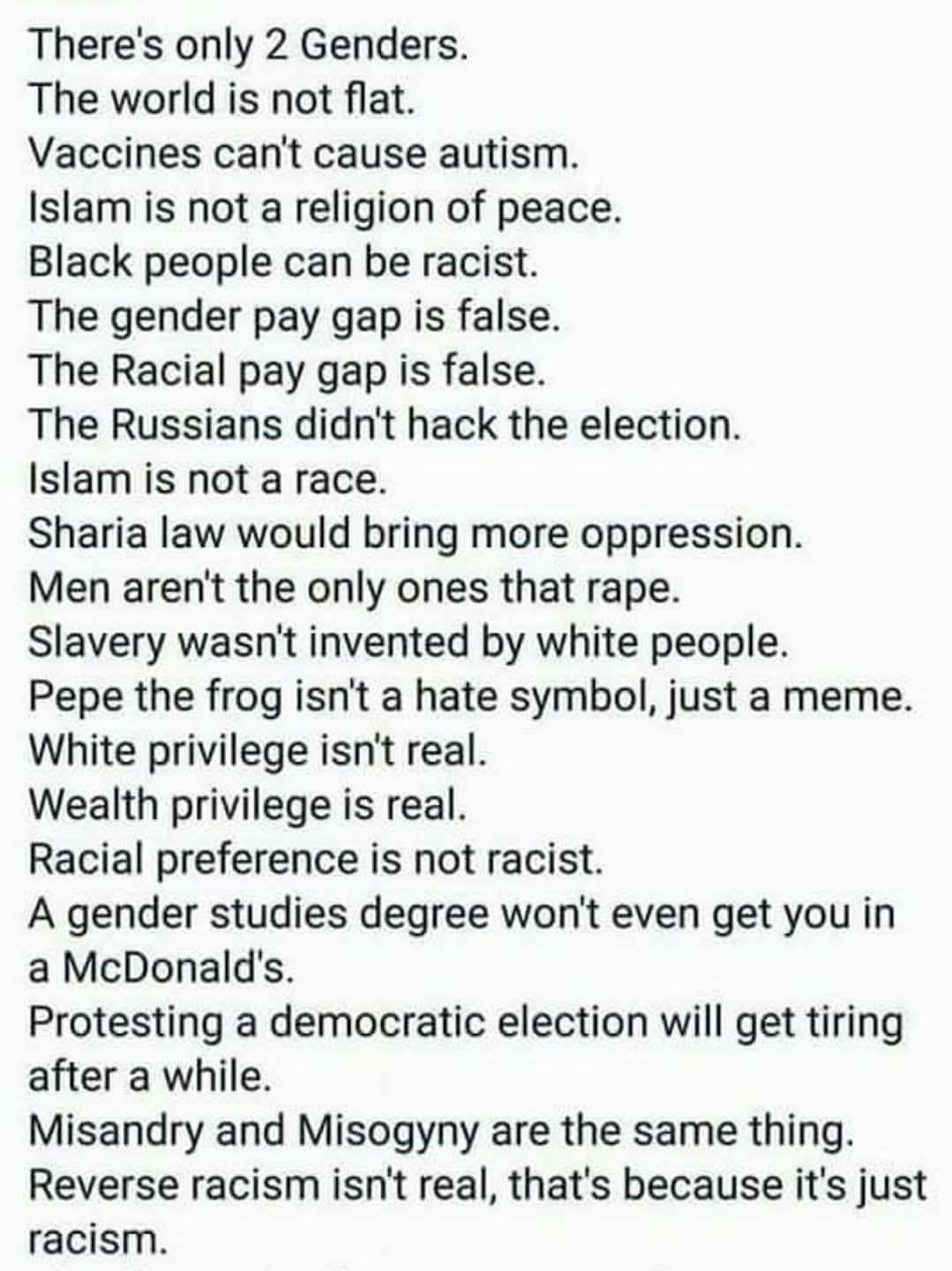 “There's only two genders” (I’ll leave aside the grammatical error) When I was growing up, I (like the grammarian H.W. Fowler, in his 1926 Dictionary of Modern English Usage) used “gender” solely as a grammatical concept, of which there are three: feminine, masculine and neuter. I always thought people used “gender” to substitute for the word “sex” because of their delicate sensibilities (in 1993, the FDA started to use “gender” instead of “sex”). In reality, there are only two bathrooms, but the concept of “gender” has become politically charged of late. Depending on how you define it, there is a distinction in psychology between biological sex and gender as a role in society—and we are social beings, after all. I’m on the fence about there being only two genders: I tend to be more generous because, honestly, it does not affect me.

“The world is not flat” True. We have the pictures.

“Vaccines can't cause autism” True. We have the science.

“Black people can be racist” Not true, and I will tell you why anon. First, beware the terminology here: “racist” is not the same as “bigoted.” Yes, black people can be bigoted, that is, prejudiced and intolerant. But black people cannot be racist. Racism requires a power structure and control of resources. Historically, at least in the USA, this has not only been jealously guarded by white people to the exclusion of black people (and other races and ethnicities), but racial restrictions on the acquisition of wealth has been a policy of white people over black people as a matter of government policy—and guess which race controls the government? Read The Color of Law by Richard Rothstein for examples and citations. Black Lives Matter and Black Power movements are a reaction to white supremacy and white privilege, not racism in themselves.

“The gender pay gap is false” The World Economic Forum would disagree with this statement; they’ve been tracking this data since 1971. Also, the London School of Economics would disagree. And the Pew Research Center. And pretty much every government agency in every industrialized country would similarly disagree. It might be better to call it the gender “income gap” or “earnings gap” because women and men make different career choices and attributing the income/earnings gap to discrimination is very difficult to quantify: it could be only 94% (as opposed to 78%-82%) if we are comparing apples to apples. But, as with racism perpetrated by white males, there are structural impediments in a male-dominated society to women achieving positions of power and to acquiring wealth.

“The racial pay gap is false” Again, better terms would be “income gap” or “earnings gap.” And structural racism plays into this very stark reality. The Pew Research Center shows that black men in 2015 earned just 75% as much as white men in median hourly income. And Hispanic men were slightly behind black men. The racial pay gap is real and has been a conscious result of a racist social structure for centuries.

“The Russians didn't hack the election” True. While there may have been some interference—certainly not on the scale at which the USA has interfered with foreign elections—there is not enough evidence to support the assertion that the Russians ‘hacked’ the 2016 election and threw it to Donald Trump. It’s a serviceable talking point for Democrats to avoid blaming a horrible candidate for their election loss, but it comes nearest to the truth.

“Islam is not a race” True. To be anti-Islamic is to be bigoted, not racist. It is also to be an asshole.

“Sharia law would bring more oppression” True, to a point. But “more” compared to what? Furthermore, this is hardly likely to happen in the USA. It’s just a talking point pushed by religious bigots to divide and scare people. And, besides, Christian Dominionist law would be just as bad. We should be scared of the likelier prospect.

“Men aren't the only ones that rape” True, but not really relevant to the overwhelming statistic for male-on-female rape (only 1 in 7 rapes by males against females are reported) vs. female-on-male rape (vanishingly tiny). Additionally, male rape of females is used as a weapon of war—never the other way around. (And grammar again: Men, being human, are a ‘who’ not a ‘that.’)

“Pepe the frog isn't a hate symbol, just a meme” I don’t know anything about this one. And I don’t care.

“White privilege isn’t real” This belief could come only from a position of privilege. Maybe Peggy McIntosh can make this clearer than I can. The unearned privileges of white people include: I can turn on the television or open to the front page of the paper and see people of my race widely represented; when I am told about our national heritage or about ‘civilization,’ I am shown that people of my color made it what it is; if a traffic cop pulls me over or if the IRS audits my tax return, I can be sure I haven’t been singled out because of my race; I can if I wish arrange to be in the company of people of my race most of the time; I can go shopping alone most of the time, pretty well assured that I will not be followed or harassed; whether I use checks, credit cards, or cash, I can count on my skin color not to work against the appearance of financial reliability; I can swear, or dress in second-hand clothes, or not answer letters without having people attribute these choices to the bad morals, the poverty, or the illiteracy of my race; I can speak in public to a powerful male group without putting my race on trial; I can do well in a challenging situation without being called a credit to my race; I am never asked to speak for all the people of my racial group.

“Wealth privilege is real” True. That’s why white males so jealously protect it from people of color. See above.

“Racial preference is not racist” As it applies to dating and friendship? I don’t know. Have you asked yourself why you prefer one race over another? If you can think of a non-bigoted reason, I am for you.

“A gender studies degree won't even get you in a McDonald’s” My understanding is that college degrees are evidence that you have developed certain skills: how to think, how to do research, how to weigh facts, how to communicate conclusions based on all of the above. Oh, and also how to open your mind. Are you sure our society has trained enough people in those skills? Or do some of the beliefs in this meme betray a lack of scholarship and open-mindedness?

“Protesting a democratic election will get tiring after a while” Well, protesting anything is tiring. But if it is worth doing… Also, if we are talking about the 2016 election, perhaps the protest is misdirected? I was waiting for the Democratic candidate and her party, who garnered over 3 million more votes than the Republican winner, to go after the entity that caused her loss: not the Russians, but the Electoral College. Yet I hear not a sound. Weird.

“Reverse racism isn't real, that's because it’s just racism” Are we talking about the perceived denial of rights and privileges to members of a dominant group in order to benefit racial and/or ethnic minorities? That ignores disparities in the exercise of power and authority, which are an essential component of racism. And I think I covered that one above.

So… there you have my response to this Statement of Beliefs. It won’t fit on a bumper sticker. But I hope it reflects more insight into the nature of things. One of these days, I may share my statement of beliefs!