Giving Up the Ghost. Thankfully. 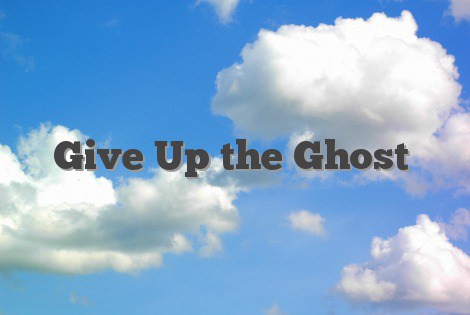 Good friends helped me and sometimes even collaborated with me. I remember contributing to a live, weekly Internet radio show called American Heathen, posting “Reflections” every other week. My involvement with the long-running show was from July 2010 to August 2012, when, with heavy heart, we shut it down and turned our gaze on other horizons. One week’s “Reflection” was peculiarly out of character for me: I decided to “rap” on religion. It was a stretch, and my friend who provided the music to my lyrics called me “the whitest rapper he ever heard,” but I thought my effort bears republishing. The lyrics are reproduced below, along with the original recording. Enjoy!

“Give Up the Ghost”
Music by Grandmaster Douché
Lyrics by John Mill (aka Ronald Bruce Meyer)
Broadcast Friday, 7/8/2011

My mother told me, “Son, you got to pray to save your soul;
You got to hit your knees because to heaven is your goal.”
My father added, “Son, you better go to Sunday school;
And learn the Bible stories and obey the golden rule.
It doesn’t matter what you do to ease your neighbor’s way,
Good works will never count until you close your eyes and pray.”
But when I opened up my eyes and took a look around,
I learned nobody listens when your knees are on the ground.
That Bible stories never come up to reality,
That Golden Rules are older than the Sea of Galilee,
That holy books are made by men, that only nature’s fact—
And there’s but one conclusion that would leave my mind intact.

Now Father Faithful loved the kids and taught us Sunday songs,
He fed us candy, played our games and taught us right from wrong,
He taught about God’s heaven so the children understood
That Jesus will accept you in his bosom if you’re good.
He taught us life’s not over when we lay us down to sleep,
That there’s an afterlife for children if the law we keep.
But when I saw my childhood friend who lived God’s law and died,
I thought that God abandoned him, so on that day I cried.
It only seems a soul survives when death takes breath away,
That if your flesh falls to the worms, just as your clothes decay,
Then either ghosts are walking naked or the story’s fake,
And Father Faithful fibbed and fooled me, for my soul to take.

My church has always taught me that to live a life that’s godly,
I have to learn the catechism, sing the hymns and, oddly,
To give up judging proper, just and moral on my own,
And leave my ethics up to Jesus and my priest alone,
To justify my conscience with appeal to holy writ,
And marvel at the mystery of God’s commands in it.
But I confess addiction to this mortal mind of mine,
To knowing right and wrong is so inborn in my design.
I see some gracious godless folk, as well as churchy clods,
Who loves theft, murder, rape, and lying, with or without gods?
My conscience out on loan to skygod’s minion makes me tense.
It’s human brains that forge the social rules: just common sense.

When I walked out the vestibule, I breathed the sun sweet air,
I thought I’d miss my friends inside, but found more friends out there.
I pondered why, if God is everywhere, we must build churches
And pay some holy huckster just to aid us in our searches.
I’d always wondered why a God that knows each heart’s desire,
And knowing from the first, up to the end, what will transpire,
Would listen to entreaties and the silly things we say,
He knows our hearts, his will is done, so what’s the point to pray?
If God is just, why fear that he will blame us for our flaws?
If God’s all-powerful, how could we ever break his laws?
If God is inconceivable, why think on His design?
If God has spoken, why has not the earth stood up in line?

SPOKEN: I’m just sayin’
When my last stanza’s playin’
There won’t be no prayin’
No hands’ll be layin’
No chorus be swayin’
’Cause the truth I’m, conveyin’
I gave up the Ghost.