Over the last weekend in June, my wife and I traveled through Michigan to Canada on a mini-vacation. My wife, as some of you may know, was born in China and is a US citizen. She retains strong ties with the Chinese community in the USA. There was a purpose to our choosing to travel north via Detroit: 35 years ago a young Chinese-American named Vincent Jen Chin was murdered by two auto workers who mistook him for Japanese. We were to attend a “Vincent Chin Remembrance,” to watch a documentary film created in his name and to recall that justice was not served against his murderers. 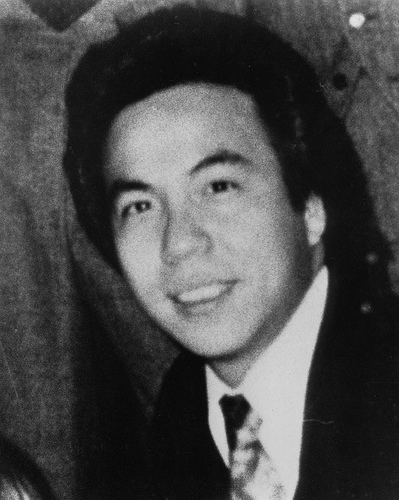 Here is the background, drawn from multiple sources (including Wikipedia).

On June 19, 1982, 27-year-old Vincent Chin (or Chén Guǒrén; 陈果仁) was out with friends at a strip club for his bachelor party in the Detroit suburb of Highland Park, Michigan. There he encountered and had words with two white Chrysler auto workers, who instigated the confrontation by declaring to Chin (referring to U.S. auto manufacturing jobs being lost to Japan), “It’s because of you little motherfuckers that we’re out of work!” Club security prevented any escalation of the confrontation, but the two auto workers would not let it go. They got in their car and searched for him, eventually finding him alone at a McDonald’s about 20 minutes later. While one of the two held Chin, the other beat him severely with a baseball bat, cracking open his skull. Four days later, on what was to have been his wedding day, Vincent Chin died from his injuries.

The perpetrators, Chrysler plant superintendent Ronald Ebens and his recently laid-off stepson, Michael Nitz, were charged with second-degree murder, but made a plea bargain for manslaughter. They were fined $3,000 and put on three years’ probation. They never got any jail time. The verdict prompted outcry and protest in the Chinese-American community at the time, one representative proclaiming it a “$3,000 license to kill” Chinese people. The hurt to the Chinese-American community is ongoing because the two murderers were able to go on with their lives.

Until a few weeks ago, I had not heard of Vincent Chin, who was born about the same year I was. Now I shall never forget him. Vincent would have been 62 this year. 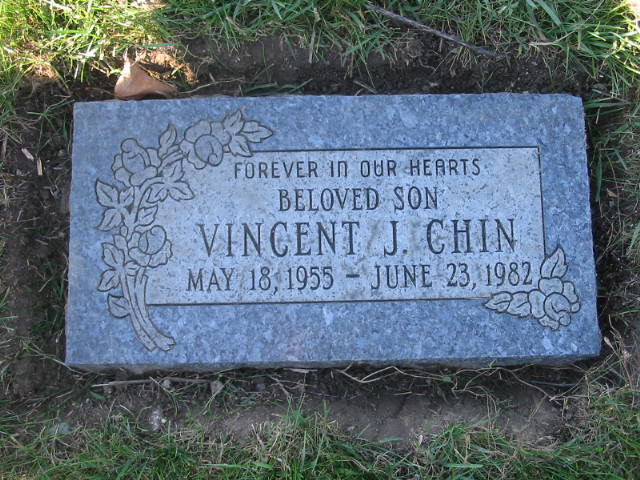 He was remembered at the Chinese Community Center on Saturday, June 24, by Association of Chinese Americans Inc., American Citizens for Justice and the Michigan Asian Pacific American Affairs Commission, among other groups and public officials. Curtis Chin, producer of the documentary film Vincent Who? which led off the remembrance, answered questions about the film and the issues it covered. A proclamation was presented for Vincent Chin. A panel discussion followed. Then the crowd was invited to lay flowers on his grave (and that of his mother, Lily, who passed away in 2002) at the Forest Lawn Cemetery in Detroit.

My wife and I stood with a crowd of at least 40 people, mostly Chinese-American, as the pastor gave his homage and invited others to do the same. Then each of us laid flowers on the slab. It was a time for reflection and that is exactly what I did.

The two men who murdered Vincent Chin in 1982 certainly deserved to be punished, but did they at least get their “economics” right? Was it because of the Japanese that they (or their friends) were out of work in the auto industry? Did Japanese imports kill the US auto industry?

The answer is yes, but not in the way those two murderers apparently believed. In the 1980s, Japan was selling cars in the US under a different business model: giving the consumer all the features up front, rather than price-gouging with add-ons after the fact. Who knew Americans would rather buy that way than the “American” way? Also, the Japanese were accustomed to making their cars more fuel efficient because they didn’t have an expensive military stationed around the world to keep oil prices low. US automakers basically failed to keep up—and that was a management problem, not a union problem, not a CAFÉ problem, not a problem of specifically foreign origin. Rather than innovating, the US auto industry rested on past glories and present arrogance. They asked Congress for help (so much for the “free market”) and got it. So it wasn’t unions or even Japanese competition that deflated the market for US-made automobiles: it was management failure among the Big Three automakers. The two men who murdered Vincent Chin, mistaking him for Japanese, were brainwashed.

Let me be clear: I take nothing away from the justice of movements such as Black Lives Matter; I do not suggest that anti-Asian prejudice is on a par with structural racism endured and resisted by black people. With 12.6% of the US population, African-Americans are triple the number of Asians (which includes Chinese, Filipino, Korean, Japanese, Vietnamese, et al.), who rank only 4.8%—according to the 2010 census. But the root cause of the prejudice is the same: a sense of white privilege, which includes a longing for a halcyon day when white hegemony was unquestioned and unquestionable.

But, again, white people are brainwashed: it isn’t black people or even yellow people who are “taking away” the jobs and the country from white people. We’re all in the same boat, economically. We just need a little mutiny to hold the “captain” to account.