Reposted from SocioPentothal: A last haven of truth
Original posting 1/17/2017 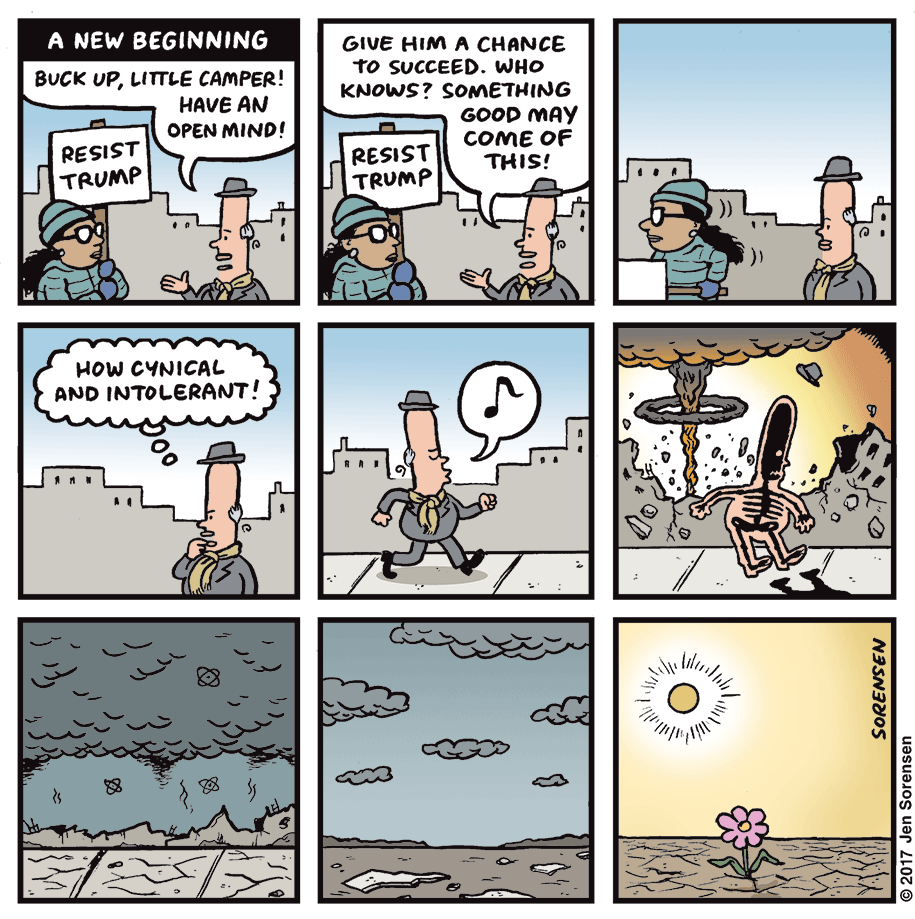 “They attacked liberalism because it seemed to them the principle premise of modern society; everything they dreaded seemed to spring from it: the bourgeois life, Manchesterism, materialism, parliament, and the parties, the lack of potential leadership. Even more, they sensed in liberalism the source of all their inner sufferings. Theirs was a resentment of loneliness; their one desire was for a new faith, a new community of believers, a world with fixed standards and no doubts, a new national religion that would bind all Germans together. All this, liberalism denied. Hence, they hated liberalism, blamed it for making outcasts of them, for uprooting them from their imaginary past, and from their faith.”
~Fritz Stern, “The Politics of Cultural Despair: A Study in the Rise of the Germanic Ideology” (1961)

If you replace the word “Germans” with “Americans” in the above quote, the paragraph is terrifying. And it should be. Because the Republican party, Donald Trump and his cabinet, and Trump voters, have embraced this ideology to the letter. Anyone or anything that the Right disagrees with is automatically considered, labeled, condemned to be “liberal” and must be expunged from the American landscape. It’s time for a New America!

Donald Trump and the Republican party are authoritarian by nature. To them, everything in their fantasy world is black and white. Evil or good. Their world is one of absolutes. They’re terrified of the shades of gray (and brown) in the uncertain world of reality. They have rooted themselves in an imaginary past, where the history of the United States is perfect, sanctified, and sacred. The only thing that stands between them and living in this imaginary past under a vengeful, righteous god, is anyone who disagrees with them. And it is here where they have nested their authority to subjugate, rule, and conquer.

In the book “American Fascists – The Christian Right and the War on America”, author Chris Hedges lays out 14 ways of identifying what he calls “Ur-Fascism”. Below are some of the 14 ways which are applicable to the Republican mindset today.

“3. Irrationalism also depends on the cult of action for action’s sake. Action being beautiful in itself, it must be taken before, or without, reflection. Thinking is a form of emasculation. Therefore, culture is suspect insofar as it is identified with critical attitudes. Distrust of the intellectual world has always been a symptom of Ur-Fascism, from Hermann Göring’s fondness for a phrase from a Hanns Johst play (“When I hear the word ‘culture’ I reach for my gun”) to the frequent use of such expressions as “degenerate intellectuals”, “eggheads”, “effete snobs”, and “universities are nests for reds.” The official Fascist intellectuals were mainly engaged in attacking modern culture and the liberal intelligentsia for having betrayed traditional values.”

This should sound familiar… Climate deniers, creationists, anti-vaccination zealots, home schoolers… These are just some of the folks who take irrationalism to new heights of absurd. It is here that we find the most robust rejection of facts and evidence, and the afterbirth of the slimy scourge of fake news. Here, I’m reminded of a quote from “Idiot America – How Stupidity Became a Virtue in the Land of the Free” by Charles P. Pierce:

“But Idiot America is a collaborative effort, the results of millions of decisions made and not made, to reduce everything to salesmanship. Debate becomes corrupted argument, in which every point of view is just another product, no better or worse than all the others, and informed citizenship is abandoned to the marketplace.”

Fox News? Breitbart? Name your poison! Moving on… Back to “American Fascists – The Christian Right and the War on America”

“4. The critical spirit makes distinctions, and to distinguish is a sign of modernism. In modern culture the scientific community praises disagreement as a way to improve knowledge. For Ur-Fascism, disagreement is treason.”

Disagree with the fascist Right? You’re a liberal, communist, atheist, pig! You’re not a “patriot”!

“5. Besides, disagreement is a sign of diversity. Ur-Fascism grows up and seeks consensus by exploiting and exacerbating the natural fear of difference. The first appeal of a fascist or prematurely fascist movement is an appeal against the intruders. Thus, Ur-Fascism is racist by definition.”

This should sound VERY familiar. The war against civil rights is well documented. More so, the current legislative assaults on immigrants, people of color, and others who hold different religious viewpoints, underscores this one well.

“Before they seize power and establish a world according to their doctrines, totalitarian movements conjure up a lying world of consistency which is more adequate to the needs of the human mind than reality itself; in which, through sheer imagination, uprooted masses can feel at home and are spared never-ending shocks which real life and real experiences deal to human beings and their expectations. The force possessed by totalitarian propaganda – before the movements have the power to drop iron curtains to prevent anyone’s disturbing, by the slightest reality, the gruesome quiet of an entirely imaginary world – lies in its ability to shut the masses off from the real world.”
~Hannah Arendt “The Origins of Totalitarianism” (1951)

Yes. That about sums up where we are right now. And it is where we are right now that leads me to believe, based on the facts and evidence at hand, that we are truly doomed. The United States of America, the people, and the country’s institutions, will be tested as never before. Unfortunately, I cannot foresee any of us surviving this onslaught. The coffin has been built, the lid is wide open. All that’s left for us to do is to lay down and close our eyes one last time. That shouldn’t be a problem. We’ve closed our eyes to the possibility of this for a long time.

(Reposted from SocioPentothal: A last haven of truth. Original posting 1/17/2017)