Real Is No Longer Reality

Reposted from SocioPentothal: A last haven of truth
Original posting 12/9/2016 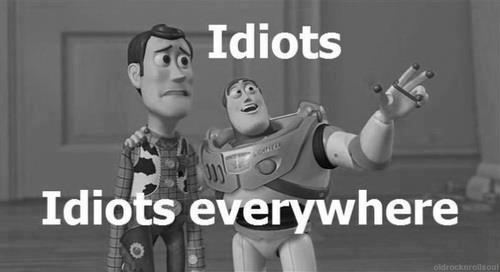 "But Idiot America is a collaborative effort, the results of millions of decisions made and not made, to reduce everything to salesmanship. Debate becomes corrupted argument, in which every point of view is just another product, no better or worse than all the others, and informed citizenship is abandoned to the marketplace. Idiot America is the development of the collective Gut at the expense of the collective mind. It's what results when we abandon our duty to treat the ridiculous with ridicule. It's what results when the politicians make ridiculous statements and we do not only surrender our right to punish them at the polls but also become too timid to punish their ideas with daily scorn - because the polls say those ideas are popular, and therefore they must hold some sort of truth, which we should respect."

"Idiot America - How Stupidity Became a Virtue in the Land of the Free" - Charles P. Pierce (2009)

Real is no longer reality. From the stumps of the political arena, the airwaves of television and radio, and the Internet... To the eyes, ears and mouths of brain-dead consumers... Real has become a matter of opinion. And reality is now roadkill. Up is down. Down is up. Science isn't a noble endeavor. Science is sacrilegious. News isn't news. News is views. Hot isn't hot. Hot is cold. Cold isn't cold. Cold is hot. The Land of the Free is no longer free. It's "How much can you afford to spend to be free? "

President-elect Trump and his cabinet picks should strike fear into the hearts of the 26% of eligible voters who voted for him. "Drain the swamp" has turned into widening it, digging it deeper, building a dam, and reinforcing it with $12 billion worth of corporate concrete. And let's not forget Trump's attempt to militarize the civilian controlled military.

Real is no longer reality. As Charles P. Pierce said: "It's what results when we abandon our duty to treat the ridiculous with ridicule."