It's a Wonderful Lie

There has to be some halfway point between being an abuser and being a doormat. Are the only choices in life being Mr. Potter and being George Bailey? Because It's a Wonderful Life presents me with that bleak choice, I hate the message while I praise the craftsmanship.

For me, it's personal. I don't in any way think myself that paragon of moral virtue portrayed by Jimmy Stewart (as George Bailey) in the Frank Capra film: as far as I know, I never saved anyone's life; never restored anyone's faith or reputation; never changed anyone's existence; never seriously considered suicide. Yet I'm sure I'm not alone in feeling myself forced into the George Bailey mold: I really don't think it's better to stay home than to trot the globe; I really do think I can do good work (or good works) and feel fulfilled elsewhere. I have never in my life felt an emotional attachment to any particular place. Never have I felt the sense of home in any place that I have lived any more than in any other. Everything seems to pull me back and keep me rooted here at home in the Washington-Baltimore area — yet what I yearn for most of all is to be a traveler. I've done a little of it, but enough to know that I love it. I really like airplanes and trains and new places and varied peoples.

So I don't think It's a Wonderful Life speaks to me — or of reality. George Bailey was given the chance by Clarence the angel (Henry Travers) to see what life in Bedford Falls would have been like had he (George) never been born. George found out that he had made a difference in the lives of many other people. But what he didn't get to see was what life would be like if he had made different choices, or if he had done almost all of those other things and then left for college as planned, made his fortune (like the friend whose wife he got), and become a benefactor of Bedford Falls — the anti-Potter. He had the moral backbone for it: 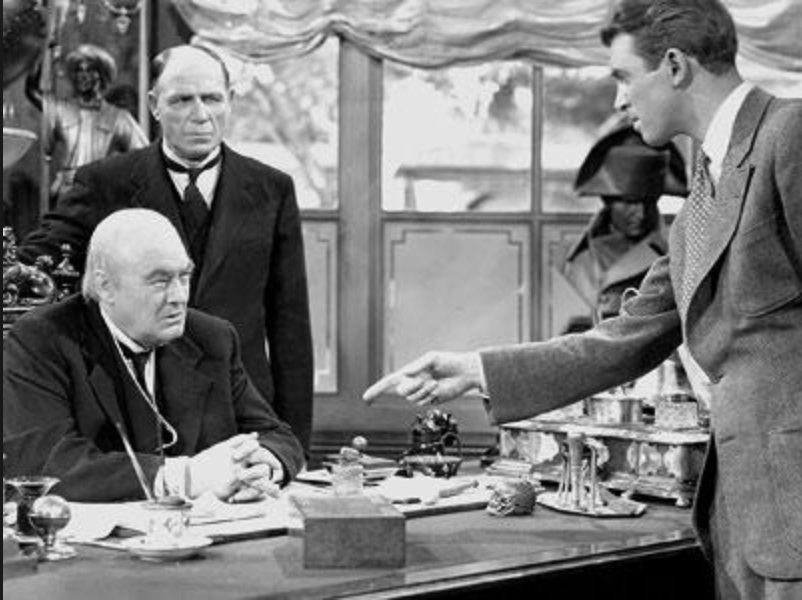 George
"Just remember this, Mr. Potter: that this rabble you're talking about,
they do most of the working and paying and living and dying in this community.
Well, is it too much to have them work and pay and live and die in a couple of
decent rooms and a bath?"

The same beneficial result could have come to the town if George had taken the plastics job offered by the same friend. Who knows? Maybe he could have bought out old Potter!

George Bailey never found out how the world might have been better without him — after all, there are some people the world would be better off without! That scenario, obviously, wouldn't have tied in neatly with Capra's simplistic, uplifting message (based on the story by Philip Van Doren Stern). But in real life, as opposed to Wonderful Life, people make bad choices, in addition to the good ones. And they hurt other people: often unintentionally, sometimes intentionally. And they miss opportunities to make good choices, or to do good, by not being in the right place at the right time. Or they fail to rise to a challenge, either through lack of skill, or lack of preparation, or lack of courage.

As I think of it, all of these things describe me and not George. So why has mine been a wonderful life, for all that? I've been fortunate in so many things in my life. I don't want to appear ungrateful, even though I have been unsuccessful in the one thing I believe would make me happiest: I want to make a difference in the world, not just warming up one dark corner of it. Wetting my pants wearing a dark suit would give me a warm feeling, too, but nobody would notice. 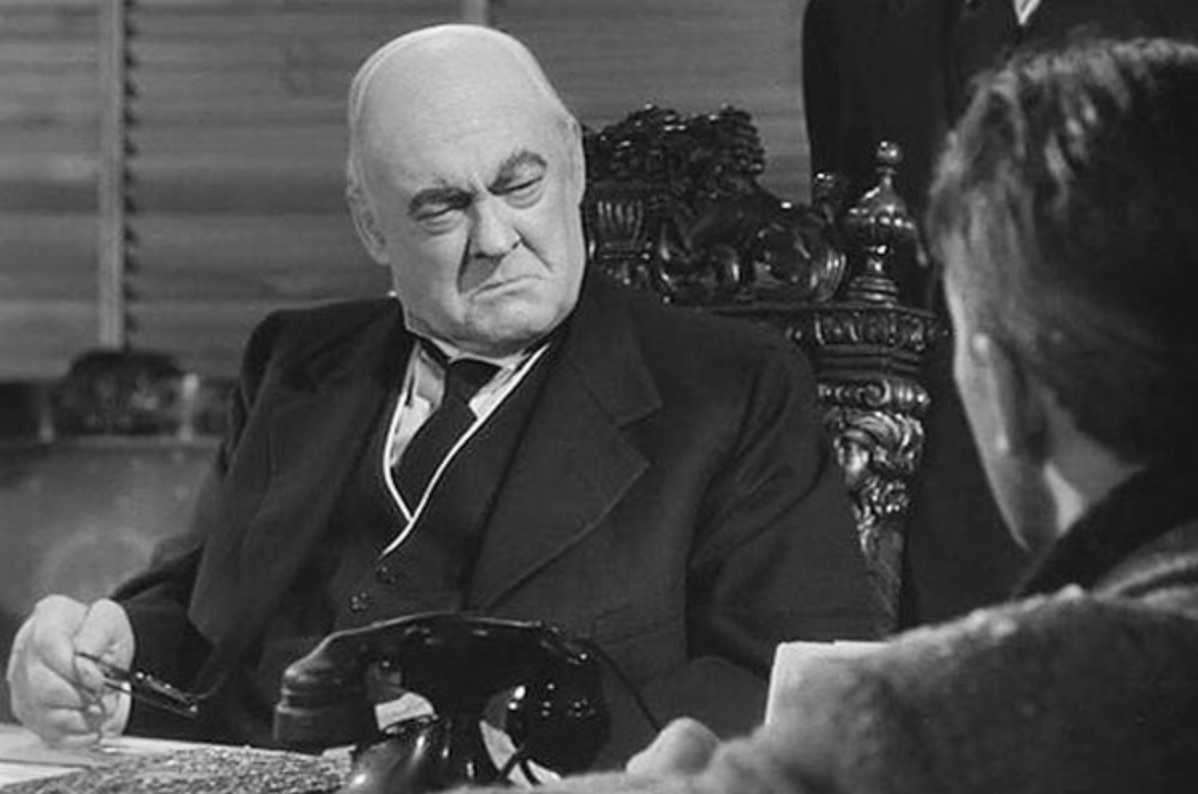 George
You sit around here and you spin your little webs and you think the whole world
revolves around you and your money! Well, it doesn't, Mr. Potter!
In the whole vast configuration of things, I'd say you were nothing but
a scurvy little spider.

It doesn't help people like me, who don't believe in angels, that George had this revelation, this epiphany of how his life was so wonderful after all, as the result of semi-divine intervention. I don't believe there's an angel looking over my shoulder, ready to intercede with a Wonderful Life story should I one day stand on the brink of suicide. If angels are among us, it must be admitted that they are mostly incompetent: they either failed to prevent — or somehow encouraged? — the multitudes of suicides who are "successful."

And while I'm on the subject (since angels, in the popular imagination, are a peculiarly Christian concept), if there's anything compelling in the modern Christian theology, and there isn't much, its the idea of redemption. Yes, I'm sure the Christians borrowed it, as they borrowed most everything else, from one demolished pagan sect or another. Who invented the idea of redemption isn't important; who fully realized it is. And there is something about the idea that a man or a woman can get a second chance in life that appeals to me. Perhaps that's why I like films such as Groundhog Day (1993) so much better than It's a Wonderful Life. Phil Connors was a defective personality redeemed by the love for a woman. To me that's more believable than a near-perfect human being redeemed by an angel.

As another example: The Fugitive (also 1993) is about redemption, but in a different way. Richard Kimble was a good man falsely accused. Like Phil, Richard had to redeem himself, but unlike Phil, the redemption was public rather than private: Phil had to become a better person before he could be loved by the woman of his dreams; Richard had to re-prove he was a good person before he could be accepted again by the world. If Richard's was a fall from grace; Phil's was an earning of grace.

It's a Wonderful Life is about redemption, too. George is in despair and on the brink of suicide and along comes an angel and he's redeemed. But therein lies the problem for me. George didn't really earn that redemption; his redemption was handed to him. Worse, it was handed to him by a creature that doesn't, and can't, exist. I can't accept divine intervention in human affairs: I don't believe it's possible and, even if it were, its not something we really want — not if we want to call our achievements our own.

Suppose for a moment that divine intervention is true and does happen. What would be the consequences? I believe the world would be even more chaotic than it appears now. We couldn't trust the painstakingly compiled observations we call the laws of nature. People would accuse divinity of playing favorites. Instead of honest asserters of uprightness, humanity would be reduced to sniveling supplicants for support. If we can fall back on prayer and supplication to solve our problems, rather than relying on ourselves and each other, what's the point of striving to better ourselves? Counting on divine intervention — expecting miracles — is how we become slaves rather than masters; how we become less morally respectable and more dependent. It is the Divine Dole. Is this really how we humans want to be? 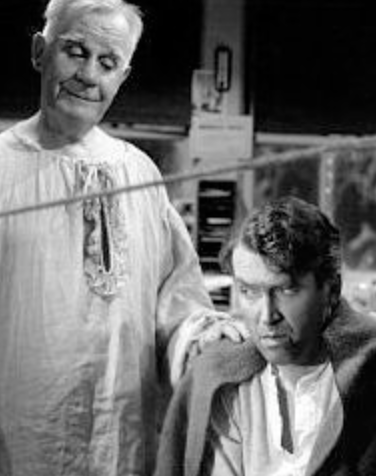 Furthermore, as Thomas Paine pointed out two centuries ago in Age of Reason, a revelation — that is, a direct and immediate communication from God to Man — is compelling only to the person to whom that knowledge is revealed. For the rest of us it is only hearsay. Therefore, George's experience may make an inspiring story, but it cannot be compelling or convincing to anyone but George. We saw that in the film, too. Indeed, if George had told the details of his angelic visit to anyone, he would have been judged insane. He would lose all of those things in his Wonderful Life that he cared about: his wife and kids, his building and loan business, his friends. Ironically, being truthful about the angelic intervention in his life would have made old Potter the winner in the story after all!

It's a Wonderful Life is a touching tale, and indeed I did weep toward the end when I watched it again. Frank Capra's tear-jerking powers are formidable. But I don't believe lives are ever so simple; I know mine isn't. I don't believe the average human being can so consistently rise above self-interest in making choices. I don't believe life's choices are so clear as they were for George. Indeed, in each case, George Bailey was the only one who could undertake to solve the problems presented. Only George was in a position to save his brother from drowning; only George could have withheld the poison from the drug store delivery customer; only George could run the building and loan after his father died; only George could save it from bankruptcy with his honeymoon money — his choices, while perhaps not easy, were obvious ones. In short, I don't believe the story. The story might be more accurately titled if you leave out one letter: Its a Wonderful Lie.

France once said, "Of all the sexual aberrations, chastity is the strangest," and "Religion has done love a great service by making it a sin."