Religion and the Cuban Revolution (1959) 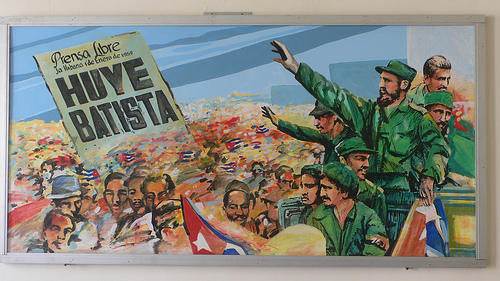 It was on this date, January 1, 1959, that Cuban dictator Fulgencio Batista fled the country, thereby signifying the success of Fidel Castro and the Cuban Revolution. “The Pearl of the Antilles,” at the entrance to the Gulf of Mexico, was inhabited by an American Indian people known as the Taíno or Arawak. And since its discovery by Christopher Columbus, on 28 October 1492, Cuba has been a toy of various colonial powers. From the first, the country was soaked in Roman Catholicism, from the names of its major cities – Santa Clara, Trinidad de Cuba, Sancti Spiritus, and San Cristobál de la Habana (founded 23 years after Columbus, which later became Havana) – to its abuse by Columbus and his successors as a source of profit for Catholic Spain and of converts to the Catholic religion.

Taking well neither to slavery nor to the diseases their conquerors brought with them, the native population was eventually wiped out, so that over succeeding centuries black Africans were imported by the thousands as slaves. The Catholic clergy themselves were imported, mostly from Spain. And while conversion was enforced, there was both a genetic and a religious hybridization: the black Africans brought with them their own religion, principally the Yoruba religion which in the Caribbean became known as Santería; and the colonial white population coupled and married freely with the African black population. The result has been a racial and a religious mixture that endures to this day: especially in that the purportedly 60% Roman Catholic population of Cuba – only 3%-5% of that number attends mass regularly – worships the “saints” of Santería.

Just prior to the turn of the 20th century, Cuba fought against Spain – the struggle immortalized Carlos Manuel de Céspedes as the Father of the Cuban Homeland and José Martí as a national hero – but Cuba succeeded only in substituting one master for another when the United States volunteered to “help” in the Cuban struggle. There followed a half-century of U.S. hegemony, ending in the Cuban Revolution (1952-1959) under Fidel and Raúl Castro, Ernesto “Ché” Guevara, Frank País and Camilo Cienfuegos, among others.

Ché Guevara was a medical doctor on whom religion had little influence, much like Camilo Cienfuegos, who was brought up in an poor, anarchist family (d. 1959). Fidel Castro was educated by Jesuits (as was his brother, Raúl) but Fidel earned a law degree. Frank País was the son of a Baptist pastor and a teacher in a Baptist school, although he did not live to see the Revolution succeed (d. 1957). All of them regarded the Catholic Church with suspicion because the Spanish-born priests were tied into the Batista government. Most priests were conservative, refused to support any socio-economic change and their churches and schools principally served Cuba’s white, upper-class city-dwellers.*

After the Revolution, some obvious changes were necessary for the survival of the new government. Even though official Catholic hostility to the new government was felt all the way from Rome, Castro closed no churches. But religious access to mass media was restricted and education was wrested from clerical hands – the government abolishing private religious schools and confiscating their property to create a more egalitarian educational system. (All this earned Castro an excommunication from Pope John XXIII in 1962.) Spanish priests who supported the counter-revolution were deported. This, and the nationalization of once-U.S. owned industries, after the U.S. forbade them to cooperate with the Cuban government, did not sit well with the Catholic Church or the U.S. government, whose priorities were revealed to be not popular government but corporate interests.

American Catholics especially were outraged. There followed the failed “Bay of Pigs” invasion of 17 April 1961, in which there was substantial involvement by Catholic clergy. The overthrow attempt was planned under President Eisenhower and carried out under President Kennedy, just 87 days into his term. A populace already favorable to the government supported Castro again when he condemned the “fascist and Falangist Spanish priests come to make war against the Revolution” (1 May 1961). There followed mass detentions of priests and lay Catholics. The detentions, deportations and emigration of Catholics further weakened an already weak Cuban Catholic Church. 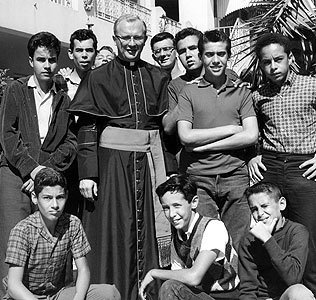 Father Walsh and his "Pedro Pans"

But the Roman Catholic Church was not done meddling with the Cuban regime, and we must remember that Church sympathies lay not with the mass of the people but with the Cuban-American exile community and the dwindling, anti-Castro elites of the island. Borrowing the name from a J.M. Barrie character who took three upper-class children away to Never-Never Land, Operation Peter Pan was developed in 1960.

According to the website PedroPan.org, “What is now known as Operation Pedro Pan was the largest recorded exodus of unaccompanied minors in the Western Hemisphere.” The rationale was this: Cuban parents, fearing that the Cuban government would take away their children, gave them up instead to the Catholic Welfare Bureau, run by a 30-year-old priest named Bryan O. Walsh. The threat was imaginary: a propaganda campaign, coordinated by the CIA and the Roman Catholic Cuban exile community, was created to destabilize the government by making Cubans believe that their children would become the property of the state.

From 1960-1962, over 14,000 Cuban children were transported to the U.S., half into the homes of U.S. relatives in over 30 states, the other half becoming wards of the Catholic Welfare Bureau. The threat of indoctrination by the Cuban government was a lie perpetrated by the very people who spirited away the children of the Cuban elites. In spite of a 1998 federal district court ruling on a FOIA request, noting that Operation Pedro Pan was not a CIA operation, it is clear that exit visas could not have been obtained without the involvement of either the CIA or the State Department – and the CIA typically operates covertly and often under cover of the U.S. Department of State.††

Operation Pedro Pan ended in October 1962 when the Cuban Missile Crisis halted commercial air traffic between the U.S. and Cuba. Many of the Pedro Pans never again saw their parents.

The Cuban Revolution was solidified and codified in the 1976 Cuban Constitution, which mandated centralized control of the market and government control of the mass media, while guaranteeing Cuban citizens free education and health care. The state also arrogated to itself the power to regulate the activities of religious institutions: Article 54 of the 1976 Constitution, while guaranteeing “freedom of conscience and the right of everyone to profess any religious belief and to practice, within the framework of respect for the law, the belief of his preference,” said furthermore, “It is illegal and punishable by law to oppose one’s faith or religious belief to the Revolution…”.†

After the collapse of the Soviet Union, the Cuban Communist Party began to allow believers into its ranks by November 1991. In July 1992, the constitution was amended to remove the explicitly atheistic characterization of the Cuban government and to ease some restrictions on believers, although access to mass media and charitable donations is still limited. In January 1998, invited by the Cuban government and the Cuban Catholic Church, Pope John Paul II paid a historic visit to the island and further opened up the regime to religious expression. Christmas was celebrated once again.

Elijan González in 1999 and today

But the Cuban exile community, comprising elites who escaped Cuba only to demonize its government and victimize its people by supporting an illegal embargo, were not done exercising their out-sized influence: in November 1999, while attempting to leave Cuba with her 6-year-old son and her boyfriend to get to the United States, the mother of Elián González drowned in the Florida Straits. The U.S. immigration service initially placed Elián with his mother’s relatives in Miami – where he was financially supported by officials of the South Florida Roman Catholic Church while the National Conference of Catholic Bishops officially remained silent – but González’s father, Juan Miguel González Quintana, insisted on his return to Cuba.

For half of the next year, an election year, there followed a heated debate over where the child’s interests were best served – in the U.S. or in Cuba. This was revealing in its characterization of Cuba as a sort of communist-atheist hell for children, a litmus test that may have lost Florida for a flip-flopping Albert Gore Jr. Eventually the courts intervened on the side of the Clinton Administration and González’s father and the boy was returned to Cuba on 28 June 2000, where he remains (an atheist) to this day.

In February 2008, an ailing Fidel Castro handed over the Cuban presidency to his brother Raúl, although he was officially “elected” to the office. He was re-elected in 2013 and plans to retire at the end of his term in 2018. In December 2014, Raúl Castro and U.S. President Barack Obama separately announced that relations between the two nations would begin a process of normalization, a “Cuban Thaw” that would include lifting of some travel restrictions, a reopening of embassies in Havana and Washington and U.S. bank access to the Cuban financial system – these in negotiations assisted by a not-at-all disinterested Pope Francis. Raúl Castro publicly thanked the Pope for his role in secret talks that led to a swap of U.S. for Cuban prisoners. The first new Catholic church to be built in Cuba since 1959 is set to break ground in Sandino, a rural area on the Cuban island’s western end.

_____
*“Despite the Catholic Church's oppression of Cubans and cooperation with the corrupt, murderous, but Catholic Fulgencio Batista and his followers before the Revolution, Cubans have enjoyed far more religious freedom under the Communist regime than under its predecessors. They enjoyed the right to not be Roman Catholic: to be atheists, agnostics, or Protestant Christians, or whatever. Generally speaking, when Catholics have been jailed, it has not been for their religious beliefs, but because they were working against the regime.” Quoted from “Cuba, Democracy, and the Catholic Church” by William P. Meyers, III Publishing, 25 March 2012

†Article 54 of the 1976 Cuban Constitution reads: “The socialist state, which bases its activity and educates the people in the scientific materialist concept of the universe, recognizes and guarantees freedom of conscience and the right of everyone to profess any religious belief and to practice, within the framework of respect for the law, the belief of his preference.

“The law regulates the activities of religious institutions. It is illegal and punishable by law to oppose one’s faith or religious belief to the Revolution, education or the fulfillment of the duty of work, defend the homeland with arms, show reverence for its symbols and other duties established by the Constitution.”

††CIA-supported Radio Swan began broadcasting in October 1960 the following announcement: "Cuban mothers, don't let them take your children away! The Revolutionary Government will take them away from you when they turn five and will keep them until they are 18. By that time, they will be materialist monsters." This was supplemented by the distribution of leaflets. See the article in CounterPunch.