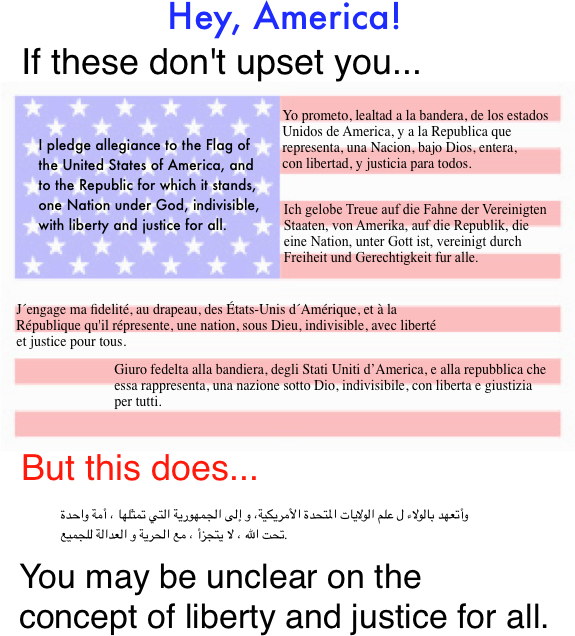 What is wrong with education in America? How can a high school student be so wrong about the core principles of his country that he would utter such nonsense as this: “What makes you American is not the language you speak, but the ideas you believe in”?

Those were the words of student leader Andrew Zink. Mr. Zink was in charge of the morning announcements for Pine Bush High School in Pine Bush, N.Y., on Wednesday 18 March 2015. On that morning, as part of the school’s celebration of National Foreign Language Week, an Arabic-speaking student read the Pledge of Allegiance … in Arabic. Later readings would have been in other languages, European languages to be sure, but it was the reading in Arabic that got the news media leading the uproar. Especially among cultural conservatives.

Right-wing news pundits were everywhere objecting to the phrase “one nation… under Allah”—which unaccountably leaves one Arabic word, the one that actually means “God,” untranslated. Oh, my. It’s as if conservatives really don’t like “under God” in the Pledge of Allegiance! Who would have imagined? (Note to conservatives: it’s best to know what you’re talking about before criticizing it. It makes you look less foolish: kind of like criticizing a movie you haven’t watched.)

A local paper, The Times Herald-Record, reported that Pine Bush School District Superintendent Joan Carbone had “received complaints from district residents who had lost family members in Afghanistan and from Jewish parents who were equally outraged by the reading.” They do know that the official languages of Afghanistan are Pashto and Dari, not Arabic, right? And would the Jewish parents have objected to a reading in German? And how about the planned reading in Japanese: didn’t “they” attack us once?

One less hyperventilating pundit, Michael Dorstewitz of Biz Pac Review, wrote “Pine Bush administrators had it all wrong. The whole concept of the United States being a “melting pot” is that people from different countries come together, assimilate and celebrate that which binds us all—being an American. Highlighting our differences—whether by race, religion or language—only divides us as a nation.”

To which I say, au contraire. You cannot claim to be a melting pot if you are ignorant of its constituent parts! Do we wish to learn nothing of other peoples and languages—which so enrich our own people and language?

American Legion Post Commander Andrew Brew, perhaps forgetting that the U.S. has no official language, told reporters, “This is America, and we speak English in America.” Now, read that sentence back and consider how senseless it sounds: English is the language from England!

Dr. Zuhdi Jasser of the Islamic Forum for Democracy, suggested to Fox News that saying the pledge in Arabic might encourage “Muslim youth” to join the radical militant group ISIS. Really? Pledging allegiance to the U.S. can do that?

One wag wrote, “If English was good enough for Jesus to use to write the bible, it’s good enough for the pledge.” When one not-so-deep thinker replied, “You may have missed it but the Bible is translated to English,” the original writer remarked, “That makes it foreign. We can’t trust that foreign stuff.”

In a rush to appease, news reports say, later in the afternoon Principal Aaron Hopmayer made a school-wide announcement to explain why the pledge was read in Arabic and to apologize to those who took offense. The principal then said the pledge would only be read in English in the future—in spite of the fact that state regulations do not mandate that the pledge be recited in a specific language, only prescribing the specific words. 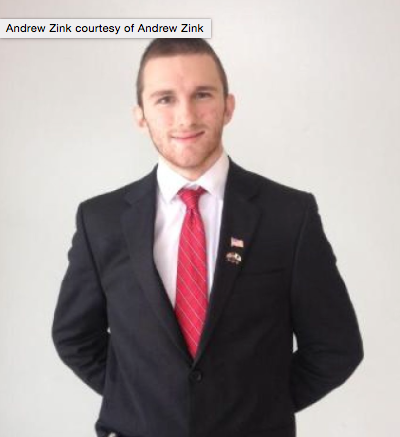 But it was for Andrew Zink, a mere student, to remind everyone that although he knew the reading would attract controversy, it was the right thing to do: “This is an example of how [The Pine Bush Central School District] would rather sweep an issue under the rug instead of having an open dialogue about it,” he said to MTV News. Indeed. Wouldn’t you think the purpose of school is to, you know, educate?

The Pine Bush school had also planned to let students hear the pledge in French, Italian, Japanese, and Spanish, but instead canceled its Foreign Language Week and banned Zinc from reading announcements for the rest of the year. So much for free speech. And so much for education.

As for the school apology, Ibrahim Hooper, a spokesman for the Council on American-Islamic Relations (CAIR), which calls itself a grassroots civil rights and advocacy group, said, “I would ask what he would be apologizing for exactly. Was his apology directed at those who have spread anti-Arab and anti-Muslim bigotry with hostile comments about this Pledge of Allegiance? … I mean, what could be more quintessentially American than offering the Pledge of Allegiance, no matter what language it’s in?”

And in an official statement, CAIR said, “When a simple student activity designed to promote mutual understanding receives such a negative reaction, and the school in which it takes place is forced to issue a public apology, all Americans who value our nation’s history of religious and ethnic diversity should be concerned. One has to wonder if such an intolerant response would have resulted from reading the pledge in a language other than Arabic.”

Just so. And somebody correct me if I’m wrong, but doesn’t the Pledge say “…with liberty and justice for all?” Does that mean everyone has liberty, but not the liberty to speak another language? Does that mean Arabic speakers can never be American?

And if you really object to Arabic, there’s a lot you’re going to have to give up—unless you don’t mind being hypocritical. For one thing, you’d better stop using the word zero, because that was an Arab invention. As are the “Arabic” numerals. And, come to think of it, you would have to give up saying admiral, albatross, alcove, algorithm, apricot, arsenal, artichoke, assassin, average, azimuth, azure, almanac, antimony, benzene, boron, candy, carrot, caravan, caraway, check/checkmate, cipher, coffee, crimson, damask, elixir, carafe, caliber/calipers, cork, demitasse and drub.

Had enough? Here’s a thought: why not give up the Pledge? It’s either a loyalty oath or a secular prayer: But either way, patriots don’t need it and traitors won’t heed it.

If that’s not possible, then you’d better give up alcohol. That’s an Arabic word, too.

Leigh Hunt (1784) It was on this date, October 19, 1784, that English writer James Leigh Hunt was born in Southgate, Middlesex. His father was a clergyman, but got into financial difficulties and ended up in a debtor's prison, leaving Leigh Hunt in the care of his mother. Early on, Hunt developed a twin passion […]