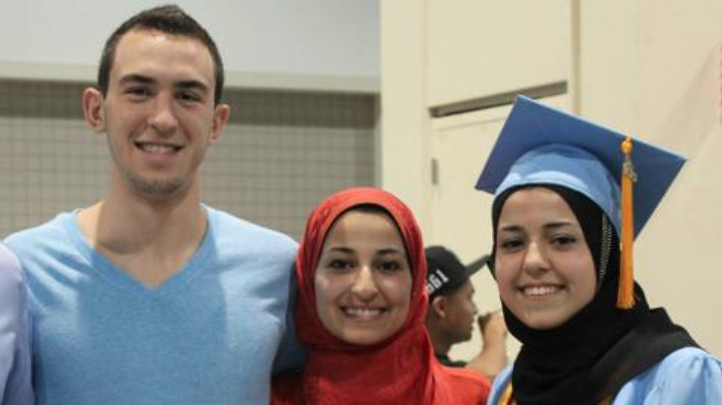 News reports say that just after 5 p.m., on Tuesday, February 10, a 46-year-old white male, upset over improper parking by his neighbors, went to one of their Chapel Hill, NC, apartments and murdered the three people inside. Or, anyway, that’s the way the news media should have reported it. But, journalism being what it is today, never mind the factual narrative: the victims were Muslim, so it must have been a “hate crime.” The suspect described himself in his Facebook profile as a “gun-toting liberal” and an “anti-theist,” who vehemently condemned all forms of religion. And despite neighbors also saying “he hated everyone equally,” but that “He’s argued with a lot of people. Parking was a big issue,” the media went with the “hate crime” angle.

The family and supporters of the victims, not to mention the news media and the FBI, seem to want this triple murder labeled a “hate crime,” because of the religion of its victims—as badly as those who knew the shooter want suppositions about his motivations to be based on his “equal opportunity anger” toward his fellow apartment complex residents for their annoying parking habits.

Because the alleged shooter condemned all religions and claimed membership in an atheist group, pundits are already claiming this is a “wake-up call for atheists” and evidence of a dark side to atheism. Presented most forcefully by staff writer Elizabeth Stoker Bruenig in a Wednesday piece for The New Republic (2/11/15), this charge demands some reply because I have a dog in this fight.

So there you have it: a “hate crime” perpetrated by an atheist. I’m going to grant you the second point and then tell you why the first one troubles me.

Atheists, like me, typically spread their messages via blogging, books, lectures and videos, rather than bullets. But OK, let’s forego the “No True Scotsman” argument—the excuse that religionists use to distance themselves from their co-religionists when they misbehave—and agree, as I do, that the Chapel Hill shooter is a radical, militant atheist. So what? Did his group, “Atheists for Equality,” give him directions to kill Muslims? Did the pope of atheism preach a crusade against Muslims? Do the atheist scriptures contain commands to kill all believers? I’m going out on a limb here, but I think the answer to all these questions is no for atheism: These are actually common characteristics of religions. No popes, no scriptures: The only thing atheists have in common is disbelief in gods.

Now to the problem of “hate crimes.” The Muslim community in the U.S. has been marginalized and victimized in the past, but by no means more than similar communities in other Western countries: recall the Charlie Hebdo attacks, in which nobody even mentioned “hate crime” because the victims were white. You see, a hate crime is a crime motivated by enmity or animus against a protected class—and white, straight males are never a protected class. This means the U.S. Constitution’s “equal protection of the laws” has been tossed under the bus of political correctness—although it appears North Carolina never got the memo: they have no “hate crimes” statute. I predict that the pressure on law enforcement to declare this triple murder a “hate crime” will be unendurable.

I am troubled by the very concept of “hate crimes” (aka bias crimes) and the enhanced penalties they bring. Forty-five states and the District of Columbia have “hate crimes” laws. Federal law can be used to punish crimes committed on the basis of a person’s race, religion, nation origin or other group membership—and this was expanded in 2009 to include perceived gender, gender identity, sexual orientation, and disability. So it seems clear that “hate crimes” laws offer preferred protection to certain groups over others.

This troubles me for several reasons.

Designating a crime a “hate crime,” when it is already a punishable crime, gives the government the power to define protected and unprotected classes. It causes groups to feel persecuted by one another. It perverts the law into protecting groups rather than individuals. It fools people into believing our legislators are being tough on crime, when in fact they are manipulating identity politics. What is worse, it transforms violent crimes into thought crimes.

Michigan Democratic Congressman John Conyers, who was House Judiciary Committee Chairman from 2007 to 2011, put it this way, saying “hate crimes” “constitute an assault not against the victim, but against our communities and against the very foundation of Democracy.” But since it is not the victim but the state that prosecutes, isn’t every crime a crime against the community? And if the standard for justice is the thought or motivation behind the act, isn’t every crime a hate crime? 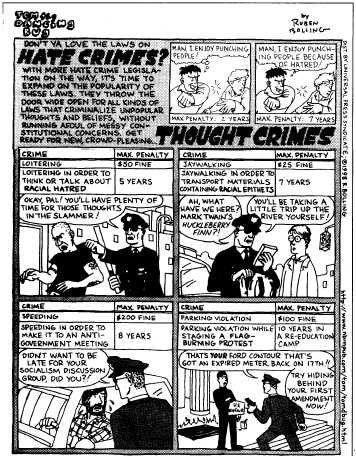 I know there appears to be this magic bullet that will kill all my arguments against “hate crimes” laws: what about the different degrees of murder? There has always been a difference in punishment between pre-meditated murder and random killing, even if the victim ends up dead in either case. But the traditional levels of culpability are (1) negligent, (2) reckless, (3) knowing and (4) purposeful. These categories describe the level of legal guilt for a crime, not the thought behind the crime.

This is the most troubling consequence of “hate crimes” laws: they trouble the concept of free speech. They lead inevitably to groups applying to have their critics silenced; that is, they lead to “hate speech” laws. This is especially true of certain Christian groups in the U.S. who believe, despite their overwhelming majority, that they are being persecuted when they see their privileged position threatened by equality. How is religious tolerance advanced by making crimes against one religious adherent more serious than crimes against another? And do we really want our government reaching into our minds when meting out punishment? Really? I think Westerners tried that once before: it was called the Dark Ages.

Sure, the punishment should fit the crime, but don’t we Americans trust our own legal system? Sure, the Chapel Hill murderer should be punished for his crime—for his crime, not for his thought. “Hate crimes” laws make us believe, and the news media to report, that our fellow citizens cannot be trusted with freedom of thought.

That’s why I’m having trouble getting my head around how treating one group better than another group can make us all equal. George Orwell warned against making certain words mean their exact opposite in his novel Nineteen Eighty-Four (1949). But he said it explicitly four years earlier in Animal Farm (1945): “All animals are equal, but some animals are more equal than others.”

Consider this: If those three Muslim students had been murdered by other Muslims, would it still have been a “hate crime”?

It was on this date, November 13, 1969, that Somali-born American feminist and atheist activist, writer and politician Ayaan Hirsi Ali was born Ayaan Hirsi Magan in Mogadishu, Somalia. While her father, a leading figure in the Somalian Revolution, was in prison, Ayann’s grandmother had the 5-year-old young girl’s genitals ritually cut off in what […]