We Believe in Free Speech

No, Really: All Evidence to the Contrary 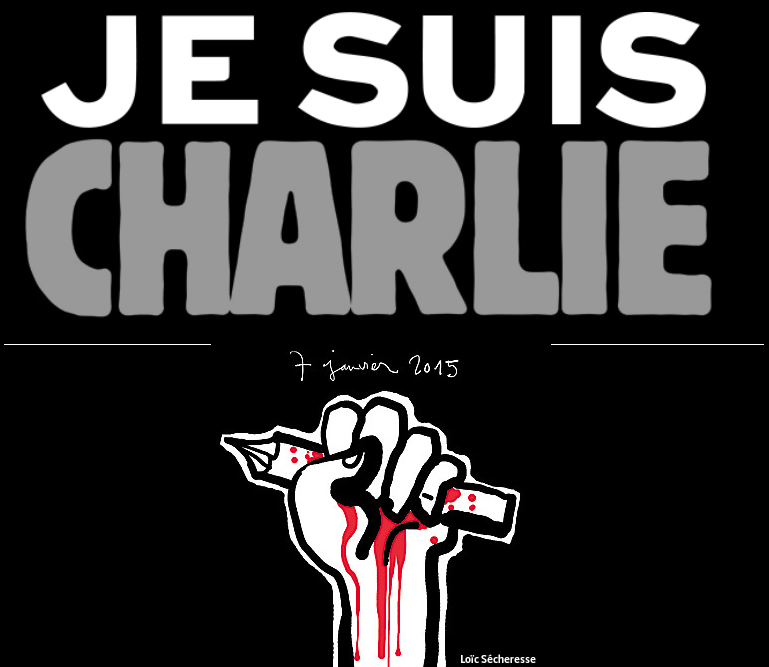 Cover art from The Economist

Years ago, when I was teaching public speaking to community college students, I started an impromptu debate on the topic of free speech. It was easy to get a student to take the “pro” side; nobody was willing to argue the “con,” so I did. What I said was, “Freedom of speech is the freedom to lie; to defame; to libel; to slander; to vilify; to offend; to blaspheme. My free speech allows me to make you uncomfortable. Do you really want to allow that?”

Like many Americans who hold dear their First Amendment, I was horrified at the events of last Wednesday in Paris. On 7 January 2015, two gunmen opened fire inside the offices of the satirical weekly newspaper Charlie Hebdo, killing twelve, including staff cartoonists Charb (Stéphane Charbonnier), Cabu, Honoré, Tignous and Wolinski, and wounding another eleven. That the gunmen were French Muslims seemed somehow relevant to the news media—although, the day before, the religion of the bomber at the Colorado NAACP headquarters was never mentioned in news reports—and also that during the attack, they shouted “Allahu akbar” (الله أكبر “God is great” in Arabic) and “the Prophet is avenged”—making clear their motive, if not their political constituency. To a female visitor at Charlie Hebdo, one of the two brothers said, “I’m not killing you because you are a woman and we don’t kill women but you have to convert to Islam, read the Qu’ran and wear a veil”—demonstrating, perhaps, that adherents of patriarchal religions, even when they have a political point to make, when it comes to subjugating women, just can’t help themselves.

(To avoid making celebrities of sociopaths, I withhold the attackers’ names and photographs, demonstrating one of the duties that accompanies free speech rights which is often remiss in the sensation-seeking mainstream news.)

Now, if you cannot recall the last time a bearded, yarmulke-wearing Jewish group shot up a publication espousing the “blood libel” or reprinting the The Protocols of the Elders of Zion, or the massive Catholic violence a generation ago, following the display of Andres Serrano’s “Piss Christ” image, you could be forgiven: nothing of the kind ever happened. And the mainstream media would not label it terrorism, anyway, just as the word was missing in the description of the Colorado attack. (See my note below)

A massive protest in Paris last Sunday, attended by many world leaders—except for the leaders of one country with an actual First Amendment—numbered over a million. The slogan “Je Suis Charlie” (“I Am Charlie”) entered the popular imagination, along with the image of a pencil. French President François Hollande, like most politicians showing no fear in expressing the obvious, described the worst terrorist attack on French soil in half a century as one “of the most extreme barbarity.” Free speech rights was on everyone’s mind, everyone’s lips. Support for Charlie Hebdo, which lampoons all religions, not just Islam, seemed to be strong by Sunday.

But is it deep? More to the point, was this support for free speech rights, one of the foundational principles of modern liberal democracies, for which centuries of conflicts have been fought and oceans of blood have been spilled—was it sincere or just for show? One wonders.

One wonders when, as Jonathan Turley pointed out in a Washington Post op-ed the day after the attack, “France’s true free-speech threat is from the government. It’s not terrorists but the nation’s restrictive laws on speech.” Turley went on, “Indeed, if the French want to memorialize those killed at Charlie Hebdo, they could start by rescinding their laws criminalizing speech that insults, defames or incites hatred, discrimination or violence on the basis of religion, race, ethnicity, nationality, disability, sex or sexual orientation. These laws have been used to harass the satirical newspaper and threaten its staff for years.”

Indeed, you will find among the world leaders who stood arm in arm in support of Charlie Hebdo (in what was later revealed to be a staged photo), and others of the so-called liberal West, to be full of the same hypocrisy: Reporters Without Borders (RSF) says, “There are far too many countries where news and content providers constantly face a very special and formidable form of censorship, one exercised in the name of religion or even God.” In the bastions of free speech it is still possible to run afoul of the law for “defamation of religion)” in France, Great Britain, Spain, Russia (remember Pussy Riot?), Ukraine and India. Italy and Greece still have a blasphemy law on the books. In Germany and Turkey it is still possible to get arrested for defamation of religion and blasphemy. Palestine showed up at the rally, but in Israel’s neighbor you can not only get arrested for defamation of religion and blasphemy, but also for apostasy. In Jordan, any of those crimes can bring a death sentence. 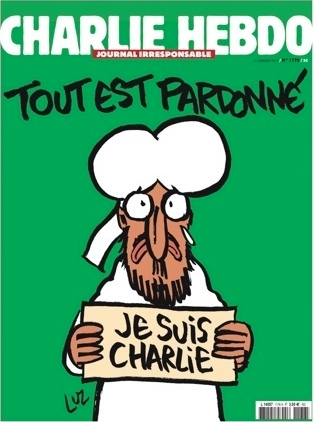 Cover of Charlie Hebdo right after the attack. The writing above Muhammad says "All is forgiven."

I have a friend who never tires of reminding me, “Hypocrisy always reveals the lie.” And so in the cradle of Western freedoms, even in the country of Liberté, Égalité, Fraternité, if you offend god, you have offended the law. And if you make a joke at the expense of the creator of the universe, the law laughs last. It is as if god, who is marketed as all-powerful, is too weak to defend himself. “We can definitely talk about hypocrisy here,” said the campaign coordinator for La Quadrature du Net, a Paris-based Internet rights group. Adrienne Charmet goes on, “In the past days, we have seen a lot of people condemned for putting out words, no matter how condemnable those words, and receiving sentences that seem quite exaggerated. … this crackdown on freedom of speech is a betrayal of last Sunday’s march.” As the French may say, Quelle ironique!


Worse, in the worst tradition of the patriarchal religions (which would be pretty much all religions), and not unlike those who see rape victims as getting what they deserve if they don’t dress or behave precisely as the patriarchs wish, it seems some would lay the blame for the murders at Charlie Hebdo at the feet of the cartoonists themselves. Bill Donohue of the Catholic League declared that the victims brought the attack upon themselves by intentionally insulting Muslims—essentially saying, and not without a wink to the Catholics who long for the day of the auto-da-fé, that you reap what you sow. Though self-serving in the brain of Bill Donohue, who yearns to punish those who insult Catholicism with impunity, and whose sentiment was echoed by Pope Francis himself, his idea is indistinguishable from the heckler’s veto: the legal theory that free speech can be curtailed by the government if reaction to that speech might be violent.

The problem with that theory, and with Donohue’s, and with hate speech laws and laws against defamation of religion, is the same: as The Economist put it three days after the attack (1/10/2015), “Nothing can be done with a pencil or a keyboard that warrants a reprisal with a Kalashnikov”—and nothing can change the fact that speakers, including cartoonists, are exercising natural rights, but that legal and extra-legal attacks on speakers are suppressing those rights. Western democracies take note, because free speech—as the masses on Sunday seemed to say, but their leaders seem not to understand—is the foundation of every other liberty: It is, or should be, Job #1 of any government-of-the-people to protect the people from attacks on ideas, not from the ideas themselves. As I tried to point out to my students so many years ago, nobody has the right to be unoffended by speech: if you have to promise not to make anybody uncomfortable with your words or your drawings, there is no free speech.

And, anyway, how exactly would a politically correct political cartoon look?

* Less Than 2 Percent Of Terrorist Attacks In The E.U. Are Religiously Motivated, writes ThinkProgress.