Luke 2:9-11
9 And, lo, the angel of the Lord came upon them [shepherds], and the glory of the Lord shone round about them: and they were sore afraid.
10 And the angel said unto them, Fear not: for, behold, I bring you good tidings of great joy, which shall be to all people.
11 For unto you is born this day in the city of David a Savior, which is Christ the Lord. 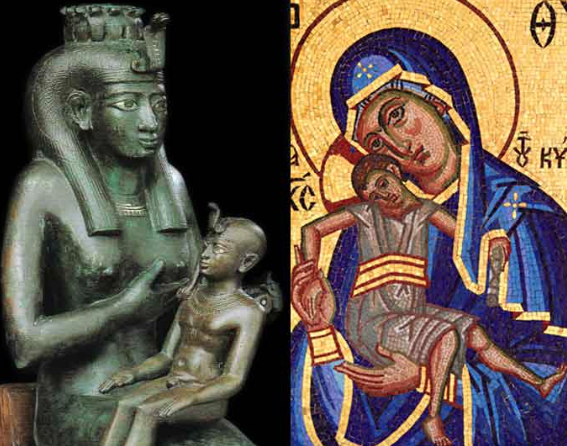 Isis and Horus vs Mary and Jesus: Coincidence or Copy?

The story in Luke is fanciful at best: the savior-god's humble birth in a manger because there was no room at the inn impressed Matthew so little that his version makes the birthplace a house. Tradition — and an apocryphal gospel of Matthew — also says that the birth was in a humble cave. St. Jerome, who lived many years in Palestine, tells of a cave in a grove at Bethlehem which was a temple of Tammuz or Adonis — both of them sun-gods who die and are resurrected. The birth of Mithra was celebrated in an underground temple which was known as a cave.

So this is Christmas: a word that means, literally, the mass celebrated on the traditional birthday of Christ. The word first occurs in 1038, but the mass has been recorded in the Philocalian Calendar, compiled in 354. It wasn't easy reconciling dates: even the Catholic Encyclopedia has to acknowledge "that there is no month in the year to which respectable authorities have not assigned Christ's birth." The date of December 25 was not fixed in both the Eastern and Western churches until about 440.

But Christmas then wasn't anything like the sentimental Victorian holiday forced on Ebenezer Scrooge in the story by Charles Dickens, to say nothing of the commercialized, secular holiday we know today. In fact, there was important resistance to its adoption in the first place. Origen objected, asserting that in the scriptures sinners alone, not saints, celebrate their birthday.

Christians strain mightily to obscure the plain historical fact that the mid-winter date of Christmas was borrowed from rival religions. Many of these older religions celebrated the birth of their savior-gods at the same time. But "celebrated" is the correct word here because they were all outlawed by Theodosius in 380 when Christianity became the official religion of the Roman Empire. But even in triumph, Christianity maintained the date at the Solstice — December 21 or shortly thereafter.

The Egyptian Cult of Isis celebrated the birthday of the sun-god Horus in midwinter, employing a tableau of the divine child in a manger, with the mother Isis beside it. In Alexandria there was the Koreion, or Temple of the Virgin. After praying all night, on December 25th the people would break into rejoicing because the Virgin Korê had "given birth to the Eternal." This is also confirmed in the Catholic Encyclopedia.

The pagan writer Macrobius (c.430) records that the Roman Saturnalia was a mid-winter tribute to the vegetation-god. The festival included a display of presents, candles, and dolls (the dolls were probably a representation of an earlier tradition of child sacrifice). Roman Emperor Aurelian (270-276) decreed December 25th as "the Birthday of the Unconquered Sun." When the cult of Mithra was adopted from Persia, their midnight celebration of the birth of the savior-god, accompanied by blazing candles and clouds of incense marked December 25th. In fact, the Mithraic temple was on Vatican Hill, close to the Christian settlement.

Mithra — like Tammuz, Adonis, Apollo and Horus — was a sun-god. So you see, the "reason for the season" is not the son of any god, but the sun up in the sky!