In case anybody remembers it, the 1971 British farce, No Sex Please, We’re British (written by Alistair Foot and Anthony Marriott) was about a newlywed bride who mail-orders some glassware but instead receives a flood of pornography, which she and her husband have to hide from nosy relatives, employers and others. I sometimes get the idea that when Bill Maher proposed a nuanced critique of liberals for not standing up for liberal values when it comes to criticizing the “mother lode of bad ideas” that comprises Islam, the concept of nuance seemed to get lost among the liberal nonsense. And I’m a liberal! 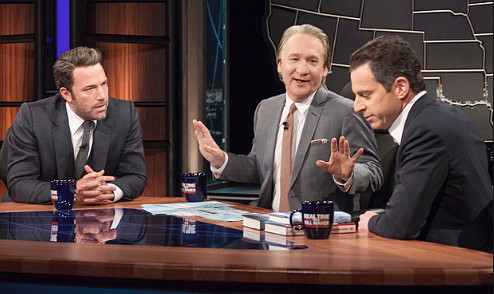 I’m concerned that liberals conflate criticism of a religion or ideology with criticism of people espousing that ideology or religion. It’s almost as if the farce playing out could be called, “No Nuance Please, We’re American.” We saw that in the exchange between Ben Affleck on the one side, and Bill Maher and Sam Harris on the other, during a recent episode of “Real Time” (10/3/14). Maher and Harris were clearly criticizing the religion, as they repeatedly pointed out and took pains to emphasize—and neither Maher nor Harris has been reticent about applying the same critique to Christianity—but Affleck seemed primed for debate, interrupting the Sam Harris segment (he who made the “mother lode” comment) and conflating not only the religion with its practitioners but making the basic but common mistake of calling Islam a “race.” At that point, everybody should have stopped listening to Affleck, because he was not listening to anybody himself! 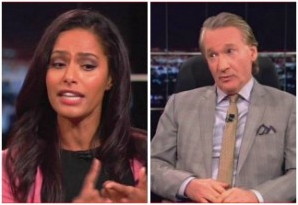 I’m sure Mr. Maher doesn't need me to defend him, just as I’m sure he wishes the issue would go away. But it won't: in a subsequent episode of “Real Time” (10/31/14) another guest, Israeli-born Palestinian journalist Rula Jebreal, also seemed primed for debate and similarly deaf to nuance. The former MSNBC correspondent prefaced her every interruption with “I’m sorry” and proceeded to call Bill Maher a bigot for pointing out flaws in the religion and claimed that Maher makes Muslims feel threatened.

So anybody criticizing a majority religion is a hero and anybody criticizing a minority religion is a bigot? That’s how Jay Tomlinson summarized a listener’s take on Maher’s critics in the coda to a recent (11/14/14) “Best of the Left” podcast. For the record, Mr. Tomlinson actually has a nuanced view of the issue, which sets him apart from most liberals. But he goes on to say that our strategy should be to criticize bad ideas themselves, not criticize the source of the bad ideas. But this misses an important fact: bad ideas come from bad thinking. So if your strategy is to focus purely on the bad ideas, you could kill them but leave in place the bad thinking—much like trying to stop a leaky roof by using ever-larger drip pans instead of, well, repairing the roof. I will concede that criticism of religion should be constructive: no atheist (not even Harris or Maher) realistically thinks that religion will ever be erased from the globe. But criticizing the religion has worked against Christianity’s bad ideas: there are more former Christians today than at any time in history!

But back to my point. My observation is that nobody can criticize the majority religion with impunity in Muslim countries, but it’s easy to do that and still live in majority Christian countries. And in this debate over criticizing Islam—the religion, not the people following it—it is good to remember three things:

1. People have rights; ideas do not. If you intend to call yourself liberal and if you truly subscribe to liberal values, then every religion, every ideology, must be freely and openly examined and discussed. Mr. Affleck’s intent was to shut off debate about Islam by conflating it with the rights of Muslims to be treated with the respect. He ignored the point that both Harris and Maher were arguing—that Islam (like most religions) is a bad idea and only the people acting on it literally should be condemned. Jebreal, who elsewhere said she considers criticism of Islam “un-American,” would not even allow that Maher had a serious point to make if he disagreed with her. But I say no religion, not even a minority religion—which Islam is only in the US and the rest of the developed world—gets a free pass from criticism just because some truly odious people, like Bill O’Reilly, hate Muslims and Islam together.

2. Liberals must not tolerate intolerance—whatever religion practices it. That includes minority religions in the US, but liberals have a duty to decry intolerance practiced by intolerant people, including Muslims, everywhere: whether directed at a Salman Rushdie, at a Malala Yousafzai or at publishers of cartoons printed in a Danish newspaper and depicting Muhammad. Furthermore, I get that there is a difference between literalist religion and religion as it is practiced. But the literalist practices of Christianity and Judaism have not survived into this century: the death penalty for apostasy, for example, and the multitude of laws and policies amounting to the subjugation of women and the LGBT. Do you think (I ask rhetorically) that is because liberals used to have a backbone? It is not racism, or even bigotry, to point out for contrast that drawing unflattering pictures of Jesus, or leaving Catholicism, carries no risk to life or limb in the West, but the same cannot be safely done in most Muslim-dominated countries of the world.

3. Islam needs a Reformation and a “Higher Criticism.” But this is not going to happen so long as (a) Muslim-dominated governments and non-state armies criminalize dissent and punish it with death, dismemberment or prison and (b) liberal Muslims in the West, and their liberal Christian and nonbeliever allies, mute their criticism of anti-liberal policies and actions, based in the Islamic religion and tradition, for fear of appearing to support the true Islamophobes.

As Bill Maher pointed out, when it comes to Islam, liberals won’t stand up for liberal values. In my opinion, we liberals and progressives (and I consider myself both) should not backslide in support of unlimited free speech, equal rights for women and the LGBT, and freedom of and from religion, no matter where in the world we are looking. These ideals are just better. And these ideals are not conspicuously present in any Muslim-dominated country today. So if we liberals don’t get that some values transcend religion, and if we can’t practice a little nuance in our understanding and discourse, then, instead of liberal, we need to call ourselves by another name.