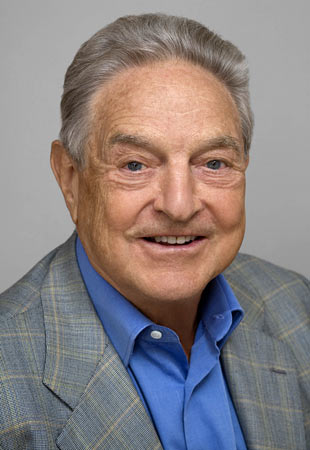 It was on this date, August 12, 1930, that Hungarian-born American multi-billionaire, business magnate, investor and philanthropist George Soros was born Schwartz György in Budapest. His family name was changed in 1936 from Schwartz to Soros because of systemic anti-Semitism. In 1947, Soros emigrated from Hungary to England. Soros earned a BSc in philosophy in 1951 and a PhD in philosophy in 1954, both from the London School of Economics. In 1956, he moved to New York City where he worked as an arbitrage trader and as an analyst, and where he developed the theory of “reflexivity” based on the ideas of Karl Popper, which posited that the valuation of any market produces a “virtuous or vicious” circle that further affects the market. Soros began his first hedge fund in 1967 and, in 1970, founded Soros Fund Management and became its chairman.

Between 1979 and 2011, Soros gave away over eight billion U.S. dollars to human rights, public health, and education causes. He was instrumental in the peaceful transition from communism to capitalism in Hungary and contributed Europe’s largest higher education endowment to Central European University in Budapest. Soros is also the chairman of the Open Society Institute, founded in 1984 and named after the book The Open Society and Its Enemies (1945) by his former teacher, Karl Popper. Achievements that redound less to his good name include currency manipulation in Malaysia and Thailand. But the market meddling that earned him the title “The Man Who Broke the Bank of England” was his short-selling £10 billion sterling, forcing the devaluation of the pound and gaining his investors a $1 billion-dollar profit in the Black Wednesday currency crisis of 16 September 1992—which cost the UK treasury £3.3 billion. However, he had lost heavily (£530 million) in the 1987 Tokyo market crash.

Contrary to the positions of his detractors, Soros takes public policy positions more in line with popular American thought (which is consistently more progressive than the mainstream media would have you believe). He is repeatedly demonized by TV personality Glenn Beck and controversial American political activist Lyndon LaRouche, among many others, because he supports progressive causes. For example, according to his website, “Soros believes an alternative approach to the U.S. war on drugs would be more effective in reducing the harm caused by drug use. Through the Open Society Foundations, he advocates for an approach to international drug policy that incorporates a greater focus on public health and human rights” (website). Soros says the war on terrorism “cannot be won by waging war. We must, of course, protect our security; but we must also correct the grievances on which terrorism feeds. Crime requires police work, not military action” (Univ. of Pa. address, 2002).

Soros told his biographer Michael Kaufman that his goal was “to become the conscience of the world” through his charitable foundations. Indeed, according to a right-wing website, which characterizes these as bad things, Soros is a financial backer of Media Matters for America, has been a major funder of MoveOn.org, funds the Center for American Progress, funds the Climate Policy Initiative and Friends of the Earth to address global warming and funded America Coming Together to defeat George W. Bush in 2004 (as if his detractors don’t have their own causes to support).

Furthermore, in his book Open Society: Reforming Global Capitalism (2001), Soros writes, “It may be shocking to say, but I believe that the current unilateralist posture of the United States constitutes a serious threat to the peace and prosperity of the world” and “The main enemy of the open society, I believe, is no longer the communist but the capitalist threat.” Soros defines an Open Society as “based on the recognition that nobody has a monopoly on the truth, that different people have different views and interests, and that there is a need for institutions to protect the rights of all people to allow them to live together in peace. Broadly speaking, an open society is characterized by a reliance on the rule of law, the existence of a democratically elected government, a diverse and vigorous civil society, and respect for minorities and minority opinions.”

Born into a non-observant Jewish family, about his religion, Soros says, “I am not a Zionist, nor am I am a practicing Jew, but I have a great deal of sympathy for my fellow Jews and a deep concern for the survival of Israel” (New York Review of Books, 12 April 2007). In a Q&A on his website, there is the following exchange—

What faith is George Soros? He identifies himself as an atheist. What are his views on religion? Soros respects all faiths and religious practices. He believes that people of faith and faith communities contribute to the public’s understanding of pressing social issues and often add a principled, moral aspect to debates that are too often dominated by politicians, statistics and polling. His views on religion are embodied by the activities of the Open Society Foundations, which have provided funding for humanitarian projects to organizations representing many faiths.

In a 20 December 1998, profile on the CBS-TV news magazine “60 Minutes,” Soros was asked by Steve Kroft if he is a religious man and if he believes in God. To both questions George Soros answered an unequivocal “No.” However, in a speech to the National Press Club (28 October 2004), Soros expanded on this view by acknowledging both a value in and a fallibility of faith—

Faith plays an important role in an open society. Exactly because our understanding is imperfect, we cannot base our decisions on knowledge alone. We need to rely on beliefs, religious or otherwise, to help us make decisions. But we must remain open to the possibility that we may be wrong so that we can correct our mistakes. Otherwise, we are bound to be wrong.

Carl Sagan (1934) It was on this date, November 9, 1934, that American astronomer and science author Carl Edward Sagan was born in New York City. Carl Sagan earned degrees in physics, astronomy and astrophysics. He taught at Cornell from 1968 and was a consultant on NASA's Mariner, Viking, Voyager and Galileo expeditions to other […]