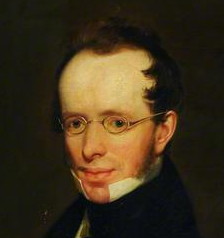 It was on this date, July 5, 1791, that English philosopher and philanthropist Samuel Bailey was born in Dunstable, England. He acquired a fortune as an industrialist and prominent citizen of Sheffield, where he was widely known as “Bailey of Sheffield,” and acquired some repute in the philosophical world through his publications, many of which (because of their anti-religious or skeptical tone) were anonymous. His essay on the Formation and Publication of Opinions appeared in 1821, and in it Bailey “vigorously contends that man is not responsible for his opinions because they are independent of his will, and that opinions should not be the subject of punishment” (J.M. Wheeler). He also published The Pursuit of Truth (1829) and a Theory of Reasoning (1851). Bailey was acquainted with both James and John Stuart Mill, and shared in most of the utilitarian views of the philosophical radicals of the period. Indeed, the poet Ebenezer Elliott dedicated his “Withered Wild Flowers” to Bailey, referring to him as “the Bentham of Hallamshire,” after the utilitarian philosopher Jeremy Bentham.

In his works, Bailey bases all moral phenomena on five facts (although one may call them aspirations rather than facts): (1) Man is susceptible to pleasure and pain; (2) Man likes or dislikes the causes of those feelings; (3) Man desires to reciprocate pleasure and pain received (much like the Golden Rule); (4) Man expects such reciprocation from others; and (5) Man feels more or less sympathy with the same feelings in his fellows. By far the work that inspired the most outrage among the religious of his time was Bailey’s anonymous, Letters from an Egyptian Kafir on a Visit to England in Search of a Religion: enforcing some neglected views regarding the duty of theological enquiry, and the morality of human interference with it. This scathing 1839 essay showed its author’s contempt for Christianity and an able defense of freedom of inquiry. First printed privately, Letters from an Egyptian Kafir was reprinted as a Reasoner Tract, in the weekly journal of utilitarian, republican and communist opinion, edited by George Jacob Holyoake (1817-1906). Described by Sir Leslie Stephen (Dictionary of National Biography) as having “the faults and merits of a self-taught and recluse thinker,” Bailey is nevertheless “shrewd and independent, terse in his exposition, and frequently pointed in style.”

A reclusive man for most of his life, Stephen says he “had no intimates and few acquaintances,” although the Sheffield where he made his home and the fortune that supported him and his work would seem to have been dear to him. He was chairman of the Sheffield Banking Company, which he had helped to found, and attended the board meetings as he conducted his other affairs, “with clockwork regularity.” At his death, he left some £80,000 to Sheffield to be used for the public good. His fellow Sheffieldians were alarmed to learn at his death—he died suddenly as he left his bath on 18 January 1870—that their benefactor was a Deist as well as a Utilitarian.

"I am convinced that there is not a god," Douglas Adams said.