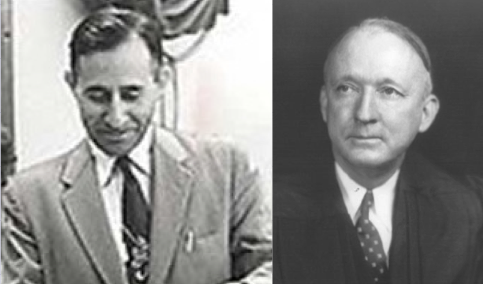 It was on this date, June 19, 1961, that the U.S. Supreme Court reminded the State of Maryland, and the rest of the nation, that the First Amendment of the U.S. Constitution applies equally to the states in its Torcaso v. Watkins decision (367 U.S. 488 (1961); 81 S.Ct. 1680, 6 L.Ed.2d 982). Maryland is one of the seven states with blasphemy laws still on its books. And the Maryland Constitution, Article 37, says, “[N]o religious test ought ever to be required as a qualification for any office of profit or trust in this State, other than a declaration of belief in the existence of God....”

In 1959, a bookkeeper for a Bethesda construction company, 48-year-old Roy Reed Torcaso, was denied appointment as a Notary Public in Maryland because he refused to declare his belief in God. The son of a Catholic father and Protestant mother, Torcaso had been an atheist his entire adult life. “The point at issue,” he said at the time, “is not whether I believe in a Supreme Being, but whether the state has a right to inquire into my beliefs.” Torcaso sued Clayton Watkins, the Montgomery County Circuit Court clerk who administered the oath, and lost. The Court of Appeals justified the Maryland requirement, saying, “The petitioner is not compelled to believe or disbelieve, under threat of punishment or other compulsion. True, unless he makes the declaration of belief, he cannot hold public office in Maryland, but he is not compelled to hold office” (223 Md. 49, 162 A. 2d 438 (1960)). Not accepting this as the final word, and having a case of such national merit that the American Civil Liberties Union and the American Jewish Congress took his side, Torcaso appealed to the U.S. Supreme Court. This was shortly after “In God We Trust” replaced “E Pluribus Unum” on U.S. currency (1957)—the slogan had been on coins since 1864—so along the way, Torcaso had to endure the epithets “dirty Communist” and “atheistic bum.”

The Supreme Court granted certiorari and, on 24 April 1961, heard oral arguments. On June 19, Associate Justice Black released the unanimous opinion of the Court, favoring Torcaso. Citing Cantwell v. Connecticut (310 U.S. 296 (1940)), the Court pointed out, “The First Amendment declares that Congress shall make no law respecting an establishment of religion or prohibiting the free exercise thereof. The Fourteenth Amendment has rendered the legislatures of the states as incompetent as Congress to enact such laws.” So it seems clear that the Constitution applies both to federal law and to the states. Contrary to Maryland’s rationale, said the Supreme Court, the fact “that a person is not compelled to hold public office cannot possibly be an excuse for barring him from office by state-imposed criteria forbidden by the Constitution.” Furthermore, citing Everson v. Board of Education (330 U.S. 1 (1947)), even in dissent, Justice Frankfurter said, “[W]e have staked the very existence of our country on the faith that complete separation between the state and religion is best for the state and best for religion.”

The high court declared that the Maryland test for public office “unconstitutionally invades [Mr. Torcaso’s] freedom of belief and religion guaranteed by the First Amendment and protected by the Fourteenth Amendment from infringement by the States.” Furthermore, said the Court, neither the state nor the federal government “can constitutionally force a person ‘to profess a belief or disbelief in any religion’” and “Neither can constitutionally pass laws or impose requirements which aid all religions as against non-believers, and neither can aid those religions based on a belief in the existence of God as against those religions founded on different beliefs.”

But the Supreme Court decision which bears Torcaso’s name carried with it a complication not yet resolved: the infamous Footnote 11. It says, “Among religions in this country which do not teach what would generally be considered a belief in the existence of God are Buddhism, Taoism, Ethical Culture, Secular Humanism and others”—thereby suggesting that secular humanism, and any secular or science-based activity is, in fact, a religion. This nuance has been seized upon by the religious as a “tu quoque” argument to deny atheist and humanist claims that calling their beliefs a religion is like calling “off” a TV channel. Although not all secular humanists are atheists, it is a safe bet that most are. And, anyway, the Ninth Circuit Court of Appeals, in the case of Peloza v. Capistrano School District (37 F.3d 517 (9th Cir. 1994))—in which a teacher complained of being forced to teach science (evolution) instead of religion (creationism) in his science class—held that for Establishment Clause purposes, secular humanism is not a religion (and that evolution is science, not religion). Additionally, the religious do not really want atheism or secular humanism to be treated like a religion: with toleration, tax exemption and credulous trust!

By August, Torcaso had won his commission as a notary public after swearing only to uphold the laws of the state and the federal Constitution—without reference to God or to religious belief—as it should have been before his two-and-a-half-year battle. Incredibly, the high court did not base its ruling on the “no religious test” clause of Article VI of the U.S. Constitution; consequently, the applicability of that provision to the states remains unresolved. Torcaso himself, a World War II and Korea veteran, and a politically liberal humanist as well as an atheist, died on 9 June 2007 at age 96. If anything, the Torcaso decision established that holding public office requires no supernatural beliefs, no creeds, no sacred texts—just a commitment to your fellow humans of service and respect.

Henri Bergson (1859) It was also on this date, October 18, 1859, that French philosopher Henri-Louis Bergson was born in Paris, in the Rue Lamartine, not far from the Opera House. His heritage was a blend of a prominent Jewish family from Poland and Irish stock on his mother's side. Bergson spent most of his […]