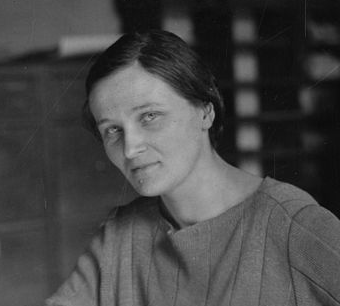 It was on this date, May 10, 1900, that British-American astronomer and astrophysicist Cecilia Payne-Gaposchkin was born Cecilia Helena Payne in Wendover, Buckinghamshire, England. Losing her father when she was four years old, Cecelia’s mother portioned the family resources to educating her brothers instead of her, but she nevertheless won a scholarship to Newnham College, Cambridge University. There she read botany, physics, and chemistry. But in 1919 she attended a lecture by astronomer Sir Arthur Eddington (1882-1944) which sparked her interest in astronomy. She completed her studies, but, knowing her options were limited in England (Cambridge did not grant degrees to women until 1948), Cecelia emigrated to the United States. She left England in 1923 to become only the second woman to be granted a fellowship to study at Harvard College Observatory. She became an American citizen in 1931.

The Director of the Observatory, Harlow Shapley, became her doctoral dissertation adviser and, in 1925, Cecilia Payne became the first woman to earn a Ph.D. in astronomy from Radcliffe College, which is now part of Harvard University. Making more than 3,000,000 observations of variable stars, Payne was able accurately to relate the spectral classes of stars to their actual temperatures by applying the ionization theory developed by Indian physicist Meghnad Saha (the Saha Equation). Suggesting correctly that silicon, carbon, and other common metals seen in the Sun’s spectrum were found in about the same relative amounts as on Earth, but that helium and hydrogen were more abundant, her dissertation established that hydrogen was the most abundant element in the universe. However, Payne’s dissertation caught the attention of astronomer Henry Norris Russell, who dissuaded her from concluding that the composition of the Sun is different from that of the Earth. But when he found out four years later that Payne was correct, after all, he acknowledged her work in his own paper.

It is not generally known that Cecilia Payne was precocious even as a child in church primary school in England. There she developed a protocol for testing the efficacy of prayer by dividing her exams into two groups: one group prayed for success on exams, the other did not. Because she got better marks in the group without intercessory prayer, Payne was agnostic thereafter. She was probably not the first to make such an experiment, but she was definitely not the last.

If by prayer we mean beseeching or entreating a supernatural being to favor our plan or outcome, the results are at best muddled—at worst, ineffectual. There are several reasons why prayer fails even on a theoretical basis: (1) if the will of humans could change the divine will, supernatural beings would not be supernatural; or, as Epicurus pointed out 2,200 years ago, if God is perfection, how can man change perfection? (2) if the will of humans could affect the course of the universe, then there would be no point in science; the order and law we have detected and understood will have been an illusion in an arbitrary world. (3) If we cannot trust our senses to make sense of the world, supernatural beings would be divine jokesters—and testing the efficacy of prayer would be pointless.

But actually testing prayer with a scientific model has been done. And the results of experimenters such as Byrd (1983), Harris and Benson (1988), the Mayo Clinic (2001) and Krucoff (2005), among other, have shown, when the studies themselves were not flawed, either a small or statistically insignificant effect. Mostly effectiveness has been inferred by searching through the data until a significant effect is found, then drawing the conclusion—also known as the sharpshooter fallacy. Nothing fails like prayer. Or as Robert Todd Carroll quipped on his Skeptic’s Dictionary website: “When the emergency technician is about to apply CPR, nobody says: ‘Wait! Let's pray first.’”

So Cecelia Payne would seem to have been vindicated. In 1933, while in Göttingen, Germany, Payne met Russian expatriate astrophysicist Sergei I. Gaposchkin. She helped him to emigrate to the U.S., married him in 1934 and they had three children. Although she and her family were members of the First Unitarian Church in her home of Lexington, Massachusetts, where she taught Sunday school, Payne was an agnostic throughout her working life. She died on 7 December 1979 in Cambridge at age 79. It was Cecilia Payne-Gaposchkin who said, on accepting the Henry Norris Russell Prize from the American Astronomical Society, “The reward of the young scientist is the emotional thrill of being the first person in the history of the world to see something or to understand something. Nothing can compare with that experience... The reward of the old scientist is the sense of having seen a vague sketch grow into a masterly landscape.”