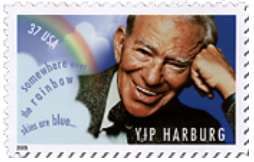 It was on this date, April 8, 1896, that American popular song lyricist Edgar Yipsel “Yip” Harburg was born Isidore Hochberg (Yiddish איסידור הוכברג) on the Lower East Side of New York City—into a Yiddish-speaking, Orthodox Jewish family that had emigrated from Russia. Best known as Edgar “Yip” Harburg, he attended high school and became friends with another future lyricist and freethinker, Ira Gershwin. After going deeply into debt following the stock market crash of 1929, Harburg collaborated with new friend Jay Gorney for musical revues on Broadway. The most memorable lyric, from Americana in 1932, was for “Brother, Can You Spare a Dime?” which became a kind of anthem for the Great Depression. Other popular songs included “April in Paris” and “It’s Only a Paper Moon.” Hollywood called later in the 1930s and Harburg collaborated with composers such as Harold Arlen, Vernon Duke, Jerome Kern, Burton Lane and Jule Styne. His signature lyrical achievement was for The Wizard of Oz, released in 1939, which won him the Academy Award for Best Original Song for “Over the Rainbow.” The Recording Industry Association of America (RIAA) and the American Film Institute (AFI) judged Judy Garland’s rendition of “Over the Rainbow” as the Number One recording of the 20th century.

While Hollywood was scared of Joseph McCarthy’s inquisition about liberal politics, Harburg could let his social conscience run free on Broadway. “The House of God never had much appeal for me,” Harburg once said. “Anyhow, I found a substitute temple—the theater.” Harburg believed people should be guaranteed basic human rights, political equality, education, economic opportunity and health care. His musicals included Bloomer Girl (1944), about temperance and women's rights activist Amelia Bloomer and Finian's Rainbow (1947), with its groundbreaking integrated chorus line and the songs “Old Devil Moon” and “How Are Things in Glocca Morra?” The writer of the lyric for the 1937 song “God’s Country,” who never joined the Communist Party, was nevertheless blacklisted from Hollywood from 1950-1962. Harburg's lyrics satirized the hysterically anti-communist sentiment in the U.S. in the short-running 1951 musical Flahooley.

Yip Harburg was not shy about satirizing popular religious beliefs, as well. Here are some selections from a collection called Rhymes for the Irreverent—

“Agnostic”
No matter how much I probe and prod,
I cannot quite believe in God;
But oh, I hope to God that He
Unswervingly believes in me.

“Federal Reserve”
In ’29 when the banks went bust,
Our coins still read “In God We Trust.”

As if there were any doubt about Yip Harburg’s opinion of religion, he gave a radio interview with Jack O’Brian on 21 May 1977, heard on WOR, New York City. O’Brian asked him, “In the abstract, what is your religion?” Harburg replied, “Well, that’s a tough question, but I would say—quickie—that my religion is to make people laugh, and in return, to give me love and I want them to make me laugh and I want to give them love.”

Edgar “Yip” Harburg died of heart failure in Hollywood, while his car was stopped at a traffic light, on 5 March 1981. It would seem his feelings about a life beyond death were influenced by similar words from Mark Twain when Yip Harburg wrote “Small Comforts”—

Before I was born, I seemed to be
Contented with being non-be-able;
So after I’m gone, it seems to me
My lot should be not less agreeable.

Gene Roddenberry (1921) It was on this date, August 19, 1921, that the creator of the Star Trek TV series, Eugene Wesley Roddenberry was born in El Paso, Texas. The family moved to Los Angeles before Gene was two and his father became a career police officer. Roddenberry took classes in law enforcement but got […]