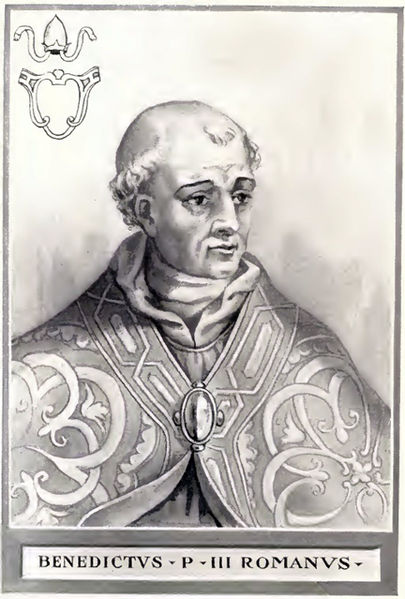 It was on this date, April 17, 858, that Pope Benedict III died in Rome, having served two years and 252 days. He had been elected in 855, but the Emperors Lothair I (795-855) and his son Louis II (825-875) preferred an ambitious cardinal named Anastasius (Anastasius Bibliothecarius; c.810-c.878). Consequently, there was a power struggle. The issue was decided in favor of Benedict, and Benedict was magnanimous enough not to have Anastasius killed or excommunicated. Indeed, the antipope outlived three papacies.

The period in which Benedict lived is known popularly as the Dark Ages, and the dark fact is that, from about 500 to about 1000, when the pagan epic Beowulf appeared, not a single piece of literature was written that anyone but a medieval scholar reads today. The age of cathedrals was nearly 300 years in Benedict’s future and the Renaissance a distant dream. And it won’t do to say that the age only appeared dark because there is little documentary history on which to judge it: that’s precisely the point! That respectable modern historians shy away from the term Dark Ages, or Dark Age, may be true—if they desire respect from only the clergy and disrespect history honestly told: the term Sæculum obscurum (Latin for “Dark Age”) was coined by a Catholic historian, Cardinal Caesar Baronius (1538-1607).*

Benedict was no great scholar, and his three-year custody of the keys of Saint Peter was unremarkable but for his efforts to curb the excesses of the likes of a powerful subdeacon named Hubert. And in this we get a window into the barbarity of Europe in the age. Writing to all the archbishops and bishops of France, Benedict said:

...we hear that the cleric Hubert ... is sunk in such filth that he has no share in eternal life. ... he does not scruple to spend his days with actresses, women who ruin souls and bodies and drag them down to the lowest depth ... and that he is for ever committing murders and adulteries, vile fornications and intolerable outrages. And not only this but we have many witnesses that he has debauched the monastery of St. Maurice ... The resources that once supported servants of God are now squandered upon whores, hounds, hawks and wicked men.

Was Hubert’s conduct uncommon? In fact, he was a member of one of the highest noble families in France and brother of the Queen. Monk-chroniclers of the time tell us that half the prelates were what you might call “worldly”—more interested in gold and girls than God—so much so that statutes had to be passed barring clerics not just from having female housekeepers: these housekeepers could not even be a mother, a sister or an aunt! Indeed, there were stories circulating about Hubert’s less-than-holy relationship with his royal sister!

Benedict’s successor, Nicholas I (later a “saint”), who occupied the chair of St. Peter from 858-867, tried to use forgeries to expand the power of the Papacy—the Pseudo-Isidorean (i.e., Forged) Decretals—and was stopped only by the scornful repudiation of Hincmar, Archbishop of Rheims. After Nicholas came what Cardinal Baronius called the “Rule of the Whores”—modern historians call it a “pornocracy”—directed by what the polemicist Bishop Liutprant of Cremona called “two voluptuous Imperial women.” These were Theodora (“a shameless whore... [who] exercised power on the Roman citizenry like a man”) and her daughter Marozia (who “ruled the papacy of the tenth century”).** After taking some as lovers, these two installed and removed popes at will, engaging freely in intrigue, nepotism, betrayal and murder. Theodora died most probably by poisoning in 916; her daughter Marozia died in prison in 937.

But back to Benedict III. He was said to have been the successor of the legendary “Pope Joan” (in fact, he followed “saint” Leo IV) although the story has more satire than sincerity to it. And you might conclude that even the existence of such a story is a sign of the times—the times being semi-barbaric, with 95 percent illiteracy, 90 percent bound to the land in serfdom, scant trade, brutal torture (including removal of eyes, ears, tongues, hands, feet, breasts, genitals and so on), coarse culture. And, of course, everybody went to church. The century following the death of Benedict saw the demise of 25 popes. Unlike many of them, Benedict died of natural causes.

Here’s your Week in Freethought History: This is more than just a calendar of events or mini-biographies – it’s a reminder that, no matter how isolated and alone we may feel at times, we as freethinkers are neither unique nor alone in the world. Last Sunday, June 17, but in 1782, was the last legal […]