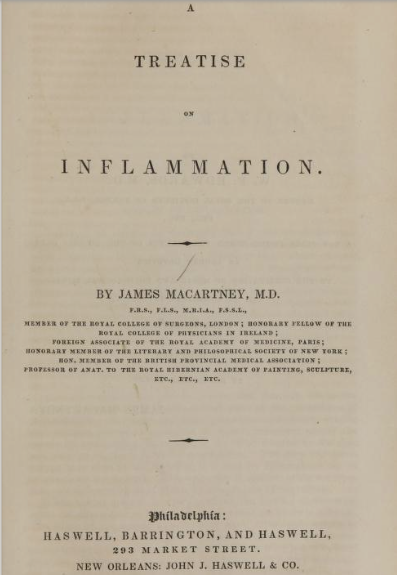 It was on this date, March 8, 1770, that Irish anatomist James Macartney was born in Armagh, Northern Ireland. From 1793 he apprenticed to the president of the Royal College of Surgeons of Ireland, William Hartigan, but after coming to London in 1796 to attend lectures, his skill was recognized by John Abernethy of St. Bartholomew’s Hospital. Through the influence of the great surgeon, Macartney was appointed a demonstrator of anatomy in the medical school. He practiced as a surgeon in London and as a lecturer on comparative anatomy and physiology at St. Bartholomew’s from 1800-1811. By election, from 1813-1837 he was professor of anatomy and surgery at Dublin University and became recognized as one of the most distinguished surgeons of his time.

Because of public distaste for dissection, without which the study of anatomy would not be possible, Macartney had much to do in shaping the Anatomy Act of 1832. The savaging of Andreas Vesalius two and a half centuries before was a not-too-distant memory, yet the Act passed over the opposition of clerics such as William Howley, the Archbishop of Canterbury. Macartney was a Deist, but the priests of his time attacked him without mercy for his Rationalism. Nevertheless, the scientist held too strong an academic and medical position to be officially repudiated. In his memoir of the anatomist,* Professor Alexander Macalister says that Macartney “did not formally commit himself to any creed, looking with suspicion upon all cut-and-dried systems of dogmatic theology.” He died in Dublin on 6 March 1843, just two days shy of his 73rd birthday. It was James Macartney who, according to Macalister, held that “every revelation, no matter whether it be real or supposed, must produce hatred and persecution among mankind...”