It was on this date, March 23, 1775, that American Revolutionary War patriot Patrick Henry spoke these immortal words before the Virginia House of Burgesses or legislature, meeting at St. John’s Church in Richmond:

Gentlemen may cry, Peace, Peace--but there is no peace. The war is actually begun! The next gale that sweeps from the north will bring to our ears the clash of resounding arms! Our brethren are already in the field! Why stand we here idle? What is it that gentlemen wish? What would they have? Is life so dear, or peace so sweet, as to be purchased at the price of chains and slavery? Forbid it, Almighty God! I know not what course others may take; but as for me, give me liberty or give me death! 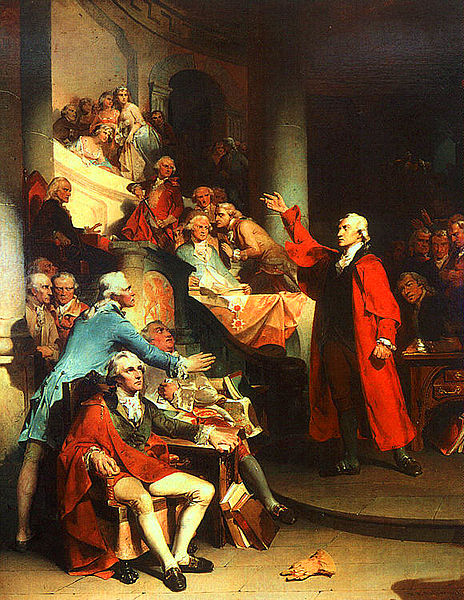 This is what we remember from school and what our children even today are taught about American history. This is to say nothing of what those who believe America was founded as a Christian Nation will claim. But this immortal “Liberty or Death” speech by a very important figure in American history, might never have been delivered – or, at least, not in the words we are encouraged to remember. And Patrick Henry himself may not have been the fundamentalist Christian the “Christian Nation” proponents claim he was.

First, it is well attested that Patrick Henry (1736-1799) delivered some motivational speech on this date at St. John’s Church in 1775. But no trace of it remains in Henry’s writings, no witness to the event – and Washington and Jefferson were there – wrote a transcript or even any notes. How, then, did we come by the text of this speech? The text of this speech first appeared in print in The Life and Character of Patrick Henry, published in 1816 by William Wirt, a Maryland-born contemporary and lawyer, seventeen years after Henry’s death, and over 41 years after the speech was delivered.

Biographer William Wirt claimed to have interviewed attendees and polled their recollections, basing his text heavily on the recollection of Bermuda-born Judge St. George Tucker. However, it is more than possible, even reasonable, to conclude that although Henry had a reputation as a powerful, persuasive orator, the “Liberty or Death” speech was in fact invented for this sympathetic biography by the biographer. Wirt was known as a pretty good writer and speech maker in his own right, and he was brought up with a strong religious education, which may explain the many religious references in the speech he attributes to Patrick Henry. The Wirt biography was considered a fiction by none other than Thomas Jefferson.

As for Patrick Henry, so popular mythology goes, he was typical among the Founding Fathers as a Christian fundamentalist, at least according to “Christian Nation” proponents. It may be true that Henry was a strong Christian, as the Faith of Our Fathers website claims, but a fundamentalist in the modern understanding of the word? The evidence they cite from Patrick Henry’s own words is less that convincing. The Faith of Our Fathers website claims Henry’s “faith was evident in his so-called ‘give me liberty or give me death’ speech.” But as it is unlikely that Henry himself wrote any part of that speech, this is not good evidence.

It is claimed, “Near the end of his life, he became more and more alarmed at the spread of deism and atheism coming from what he called France’s ‘godless revolution.’” Leaving aside that the French Revolution was inspired by its American cousin, and that the French clergy (and God-appointed monarchy) had abused its citizens and its power and privilege for centuries, there is little evidence, if this is true, that Henry did or said anything about this.

It is claimed, “Toward the end of his life, [Henry] reportedly read his Bible for hours at a time… and once said to a neighbor, ‘This book is worth all the books that ever were printed, and it has been my misfortune that I never found time to read it with the proper attention and feeling till lately. I trust in the mercy of heaven that it is not too late.’” But this quote, rather than establishing Patrick Henry’s fundamentalist bona fides, rather makes of him a religious slacker during the most productive period of his life!

Amongst other strange things said of me, I hear it is said by the deists that I am one of the number; and indeed, that some good people think I am no Christian. This thought gives me much more pain than the appellation of Tory; because I think religion of infinitely higher importance than politics; and I find much cause to reproach myself that I have lived so long, and have given no decided and public proofs of my being a Christian. But, indeed, my dear child, this is a character which I prize far above all this world has, or can boast.”

But, again, this shows that, in the absence of any positive statement during most of his life, Henry could quite possibly have been a Deist, for he found it not so important to disabuse anybody of this notion until three years before his death! Furthermore, at the end of his life, it is claimed, “On his death bed, Patrick Henry said: “Doctor, I wish you to observe how real and beneficial the religion of Christ is to a man about to die....I am, however, much consoled by reflecting that the religion of Christ has, from its first appearance in the world, been attacked in vain by all the wits, philosophers, and wise ones, aided by every power of man, and its triumphs have been complete.” Here we could have nothing more than a deathbed conversion.

Finally, it is claimed, “On November 20, 1798, in his Last Will and Testament, Patrick Henry wrote: “This is all the inheritance I give to my dear family. The religion of Christ will give them one which will make them rich indeed.” Yes, this is a testimony to his faith, but still rather late in the game.

Those are just the quotes that can be attested. But that is not enough for some who believe that Patrick Henry was not a strong enough Christian in his authentic words, so that they have to make some up. For example, in an e-mail about the faith of the American Founding Fathers, there is this:

Patrick Henry, that patriot and Founding Father of our country said, “It cannot be emphasized too strongly or too often that this great nation was founded not by religionists but by Christians... not on religions but on the Gospel of Jesus Christ.”

The urban legends debunking website known as Snopes lists this as a “spurious quotation.” The site goes on to say, “These words appear nowhere in the writings or recorded utterances of Patrick Henry. They attached to Henry via an April 1956 article that appeared in The Virginian (reprinted in September 1956 in The American Mercury—a magazine co-founded by agnostic writer H.L. Mencken, who had, just that January, begun singing in the heavenly choir) in which a snippet from his will was followed by comments penned by the article's author. Those comments included the “founded by Christians” statement now mistakenly attributed to Henry.”

Patrick Henry’s place in American history as a patriot and revolutionist is assured, even if his true religious feelings remain an enigma, or at least a point of debate. But the “Liberty or Death” speech is neither evidence of the Christian origins of this nation, nor evidence of the religion of an American patriot.