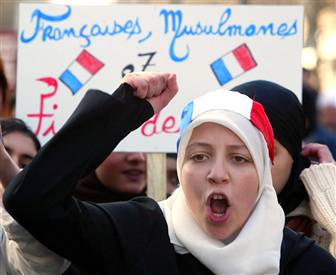 It was on this date, March 15, 2004, that French President Jacques Chirac signed a law banning large symbols of religious affiliation in public schools. Known in most of the news outlets outside of France as the “French Headscarf Ban,” the law restricts in public primary and secondary schools any visible religious symbols such as Muslim head scarves, Sikh turbans and Jewish yarmulkes, but exempted small Christian crosses and small Stars of David. Because nuance is as foreign to Americans as white bread is to the French, these distinctions were seen by many in the US and around the world as discriminatory against French Muslims – even as French natives view Muslim religious garb as “un-French” but Americans are not shy about prescribing what is un-American.

In order to understand the law, a little background in French history is required. Until the French Revolution of 1789, the Roman Catholic Church wielded major influence over the monarchy and the peasantry (that is, most of the people of France), and was consequently grossly corrupt and unconscionably deaf to the plight of the subservient class. The Revolution did not kill the churches so much as put the clergy in its proper place: a strict laïcicité, or secularism, was imposed on society – in fact, it was so easily imposed that some scholars doubt the depth of the hold Christianity had on French society in the first place – and enormous church assets were auctioned off to retire the debts that led to the Revolution. One might ask why it was necessary for the churches to be so wealthy, but that is a subject for another time.

Separation of church and state was codified into French law in 1905. This separation is truly egalitarian: religion is neither forced nor favored; neither is atheism promoted. Indeed, left to themselves, without clerical coercion, the French abandoned the churches in droves.

In July 2003, French President Jacques Chirac set up an investigative committee to make recommendations on the “problem of Islamic integration” into French society. The “Stasi Commission,” as it was called, headed by Bernard Stasi, published its report on 11 December 2003. The Commission's report emphasized that publicly funded schools in France should train students for a professional career and to make them into good citizens of the French Republic. The wearing of headscarves (sometimes referred to as the hijab in both French and English – the word means “modesty”) in school started in about the 1980s in mainland France, but the increasing number of visible headscarves was taken as significant of a rise in extremist activity, in particular in poor immigrant suburbs.

Why do young Muslim women wear the headscarf? Some see it as a way to preserve their modesty. Some see it as a form of liberation form the sexualization of society. But many see the true reason, since no man wears one: as a patriarchal mandate to keep women hidden and subservient.

The law came into effect with the new school year on 2 September 2004 and caused a strong cry from Muslims all over the world. Not only were there protests in Paris, there were also protests in other European cities and other countries, especially Muslim countries, worldwide. But the objections are desperate special pleading: the French have the right to define what is French and what is not, the French have laws requiring the public sphere to be strictly neutral with regard to religion (with their own history on their side), and, what is most important, no society can survive if a minority can dictate policy to the majority.

Unless you are exceedingly arrogant, you do not emigrate to a new country and expect it to accommodate to you; you accommodate to it. And let this be an object lesson to those espousing the chimera of “multiculturalism”: the French have it right. There is one culture in France and it is French. Multiculturalism drives culture to its death.

“You have to stand in awe of the all-time champion of false promises and exaggerated claims, religion. I would never want to be a member of a group whose symbol was a guy nailed to two pieces of wood.”