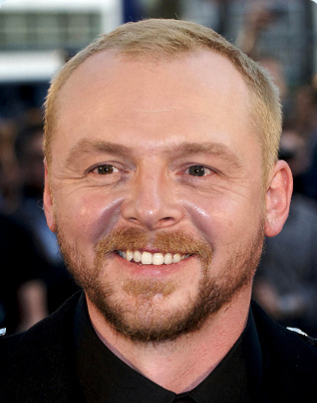 It was on this date, February 14, 1970, that English actor, comedian, writer, film producer and director Simon Pegg was born Simon John Beckingham in Brockworth, Gloucestershire, England. Simon was seven when his parents divorced and he took the surname of his stepfather, Pegg, after his mother re-married. Simon Pegg is known for having co-written and starred in Edgar Wright films such as Shaun of the Dead (2004) and Hot Fuzz (2007), the 2011 film Paul (with Nick Frost), about two young men who encounter a comedic extraterrestrial alien during a road trip across the U.S. and (with Jessica Stevenson) the Channel 4 sitcom series “Spaced” (1999-2001). He has reprised two roles in major films: as “Scotty” (Chief Engineer Montgomery Scott) in the 2009 Star Trek film and its sequels Star Trek Into Darkness (2013) and Star Trek Beyond (2016), as well as Benji Dunn in Mission: Impossible III (2006) and its sequels Mission: Impossible–Ghost Protocol (2011), Mission: Impossible–Rogue Nation (2015) and Mission: Impossible–Fallout (2018).

Simon Pegg is an atheist. Pegg said more in a press interview on the release of Paul (2011), a road trip movie featuring a sarcastic alien with an appetite for alcohol and cigarettes. The interviewer asks Pegg and co-writer/co-star Nick Frost about supposedly anti-Christian / anti-Creationist elements in the film, “It’s a fun movie, but do you think you’re going to get any flak from the Bible belt in America?” Pegg quips, “Who doesn’t get flak from the Bible belt in America?” Then he says, “There wasn’t a massive atheist protest when The Ten Commandments came out. There wasn’t a protest at my local school at the Nativity play this year. It’s just a film.”

He posted on a January 10, 2012, Twitter feed, “As an atheist, I’d skip the prayer and go straight to the colonel, who is arguably the god of affordable, bucket housed fried chicken bits.” He tweeted on the same day, “Oh come on people, there is no god! In fact I’m so sure that I will say without fear that if there is a god, may I be str...” – spoofing being struck dead for saying so.

Here’s your Week in Freethought History: This is more than just a calendar of events or mini-biographies – it’s a reminder that, no matter how isolated and alone we may feel at times, we as freethinkers are neither unique nor alone in the world. Last Sunday, August 19, but in 1921, the creator of the […]