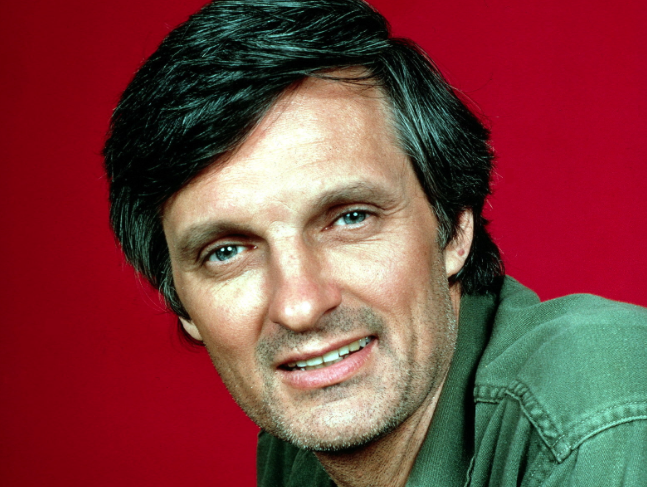 It was on this date, January 28, 1936, that American actor, director, screenwriter, and author Alan Alda was born Alphonso Joseph D’Abruzzo to actor and singer Robert Alda and Joan Browne, a former showgirl and Miss New York pageant winner. His adopted stage and screen name, “Alda,” is a portmanteau of ALphonso and D’Abruzzo. A six-time Emmy Award and Golden Globe Award winner, he is best known for his starring roles as Hawkeye Pierce in the TV series “M*A*S*H” (1972-1983) (the only actor to appear in every episode) and as Arnold Vinick in “The West Wing” (2004-2006). For his TV acting, Alda has received 31 Emmy nominations, winning for both “M*A*S*H” and “The West Wing.” He has also distinguished himself in supporting roles in What Women Want (2000), The Aviator (2004, Academy Award nomination) and Tower Heist (2011), among other films, often as a villain or an unsympathetic authority figure.

Currently a Visiting Professor at the State University of New York at Stony Brook School of Journalism and a member of the advisory board of The Center for Communicating Science, Alda also serves on the board of the World Science Festival and is a judge for Math-O-Vision. He hosted the PBS program “Scientific American Frontiers” from 1993-2005. “The most striking thing about the scientists I met,” said Alda, “was their complete dedication to evidence. It reminded me of the wonderfully plainspoken words of Richard Feynman who felt it was better not to know than to know something that was wrong.” An activist as well as an actor, Alda is a strong supporter of women’s rights and the feminist movement, as well as for gay rights. He is active in raising funds for St. Jude’s Children’s Hospital, founded by the father of friend and collaborator Marlo Thomas.

Reared as a Roman Catholic, in his 2007 memoir, Things I Overheard While Talking to Myself (his second), Alda describes how as a teen he began thinking like an agnostic or atheist—

For a while in my teens, I was sure I had it. It was about getting to heaven. If heaven existed and lasted forever, then a mere lifetime spent scrupulously following orders was a small investment for an infinite payoff. One day, though, I realized I was no longer a believer, and realizing that, I couldn’t go back. Not that I lost the urge to pray. Occasionally, even after I stopped believing, I might send off a quick memo to the Master of the Universe, usually on a matter needing urgent attention, like Oh, God, don’t let us crash. These were automatic expulsions of words, brief SOS messages from the base of my brain. They were similar to the short prayers that were admired by the church in my Catholic boyhood, which they called “ejaculations.” I always liked the idea that you could shorten your time in purgatory with each ejaculation; what boy wouldn’t find that a comforting idea? But my effort to keep the plane in the air by talking to God didn’t mean I suddenly was overcome with belief, only that I was scared. Whether I’d wake up in heaven someday or not, whatever meaning I found would have to occur first on this end of eternity.

In a 2008 article for the Edge Foundation website, Alda goes on about the differences between lack of belief, which is atheism, and admitting you do not know about supernatural beings, which is agnosticism—

I still don’t like the word agnostic. It’s too fancy. I’m simply not a believer. But, as simple as this notion is, it confuses some people. Someone wrote a Wikipedia entry about me, identifying me as an atheist because I’d said in a book I wrote that I wasn’t a believer. I guess in a world uncomfortable with uncertainty, an unbeliever must be an atheist, and possibly an infidel. This gets us back to that most pressing of human questions: why do people worry so much about other people’s holding beliefs other than their own? …

Do our beliefs identify us the way our language, foods and customs do? Is this why people who think the universe chugs along on its own are as repellent to some as people who eat live monkey brains are to others? Are we saying, you threaten my identity with your infidelity to my beliefs? You’re trying to kill me with your thoughts, so I’ll get you first with this stone? And, if so, is this really something that can be resolved through reasonable discourse?

As a kind of summing up, Alda heard the following while talking to himself: “So that's it. I’ve told you everything I know. Think clearly and think for yourself. Learn to use language to express those thoughts. Love somebody with all your heart. And with everyone, whether you love them or not, find out if you can be helpful. But really, it’s even simpler than that. After all this time, and all these talks in public and in private, I think I get it now. ... I see now that I had my meaning all along, I just had to notice it. The meaning of life... is life.”