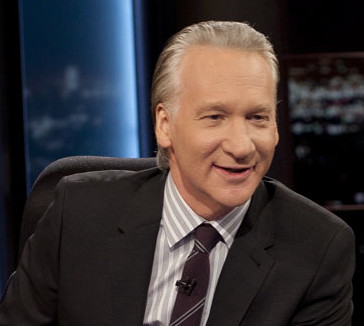 It was on this date, January 20, 1956, that American stand-up comedian and author William “Bill” Maher, Jr. was born in New York City to a Jewish mother and Catholic father and reared in River Vale, N.J.. Maher attended Cornell University and started his stand-up comic career in 1979. In addition to his live stand-up comic gigs across the country, he was host of “Politically Incorrect” on Comedy Central and then ABC, from 1993 until it was canceled in controversy in 2002*, almost a dozen HBO stand-up specials, such as the Emmy-nominated “The Decider” (2007), “I’m Swiss” (2005) and “But I’m Not Wrong” (2010) – and, since 2003, he hosts “Real Time with Bill Maher” on HBO. His several books include When You Ride Alone, You Ride With Bin Laden (2002) and New Rules: Polite Musings from a Timid Observer (2006). Maher is known for his political satire and social commentary, often but not exclusively against religion. His film Religulous (2008), the seventh-highest grossing documentary of all time, brought Maher face to face with religious and non-religious people around the world and challenged the viewer to see all religions and all depths of belief in the unbelievable as a major social problem.

For example, in Religulous, Maher says,

The only appropriate attitude for man to have about the big questions is not the arrogant certitude that is the hallmark of religion, but doubt. Doubt is humble, and that's what man needs to be, considering that human history is just a litany of getting shit dead wrong. … Faith means making a virtue out of not thinking. It’s nothing to brag about. And those who preach faith and enable and elevate it are our intellectual slaveholders, keeping mankind in a bondage to fantasy and nonsense that has spawned and justified so much lunacy and destruction.

Maher has taken humorous shots at religion in many venues. On “The Tonight Show with Jay Leno” (April 24, 2004), he told the host, “I hate religion. I think it’s a neurological disorder.” On a 17 February 2006 broadcast of “Real Time,” Maher proposed this in his “New Rules” segment: “If churches don’t have to pay taxes, they also can’t call the fire department when they catch fire. Sorry reverend, that’s one of those services that goes along with paying in. I’ll use the fire department I pay for. You can pray for rain.” Two years later, on the same program (April 2008), he quipped, “If you have a few hundred followers and you let some of them molest children, they call you a cult leader. If you have a billion, they call you Pope.” He went even further in his 2010 HBO stand-up comedy special, “But I’m Not Wrong” —

When I hear from people that religion doesn’t hurt anything, I say, really? Well besides wars, the Crusades, the Inquisitions, 9-11, ethnic cleansing, the suppression of women, the suppression of homosexuals, fatwas, honor killings, suicide bombings, arranged marriages to minors, human sacrifice, burning witches, and systematic sex with children, I have a few little quibbles. And I forgot blowing up girls’ schools in Afghanistan.

But Maher makes some of his best comically antireligious jibes in his “New Rules” at the end of each broadcast of “Real Time,” laying on the sarcasm against religious hypocrites in, for example, this segment from 13 May 2011:

Martin Luther King gets to call himself a Christian because he actually practiced loving his enemies. And Gandhi was so fucking Christian, he was Hindu. But, if you rejoice in revenge, torture and war – hey, that’s why they call it the weekend – you cannot say you’re a follower of the guy who explicitly said, “Love your enemies and do good to those who hate you.” Jesus lays on that hippie stuff pretty thick. He has lines like, “Do not repay evil with evil.” Really. It’s in that book you hold up when you scream at gay people.

I mean, you know, there’s “interpreting,” and then there’s just ignoring. It’s just ignoring if you’re for torture. As are more evangelical Christians than any other religion. You’re supposed to look at that figure of Christ on the cross and think, “How could a man suffer like that and forgive?” not “Romans are pussies; he still has his eyes.” If you go to a baptism and hold the baby under until he starts talking, you’re missing the message.

But, you see, I can say that because I’m a non-Christian. Just like most Christians. And, Christians, I know, I’m sorry; I know you hate this and you want to square this circle, but you can’t. I’m not even judging you. I’m just saying, logically, if you ignore every single thing Jesus commanded you to do, you’re not a Christian. You’re just auditing. You’re not Christ’s followers. You’re just fans.

Bill Maher is number 38 on Comedy Central’s list of the 100 greatest stand-up comedians of all time. And while his social commentary extends beyond religion, he often has a serious message wrapped within an unserious delivery – especially where politics meets religion, as when he riffed on a New Rule concerning Supreme Court Justice, and fundamentalist Roman Catholic, Antonin Scalia:

I know we can't establish a religious test for office, but if you believe we’re living in the End Times … we get to take away the car keys. Yes, let Jesus take the wheel. If you think the world is about to end, that’s your right. But, you don’t get to vote on next year’s budget, because it doesn’t concern you!

… Antonin Scalia put George Bush in the White House, and he believes the Devil went down to Georgia. It would be one thing if Mr. Scalia sold pizza for a living, but this is a man we go to, to interpret our laws. It’s like smelling a gas leak and calling an exorcist. … He gets to decide when life begins, and he thinks “evil” is a person, you know, like a corporation.

Here's the problem with believing the Devil exists. It means you see the world divided into teams of good and evil, and suspect the “wiley one” may be on the side of “them.” And when you start seeing compromising with your opponents as a compromise with evil, well, there’s your Tea Party. (“Real Time with Bill Maher” New Rules, 10/11/13)

* The controversy that led to the cancellation of “Politically Incorrect” in 2002 was, ironically, a politically incorrect but demonstrably true observation. Six days after the terrorist attack of 9/11/2001 on the United States, Maher said on his show, “We have been the cowards, lobbing cruise missiles from 2,000 miles away. That’s cowardly. Staying in the airplane when it hits the building, say what you want about it, that’s not cowardly. Stupid maybe, but not cowardly.” (17 September 2001)