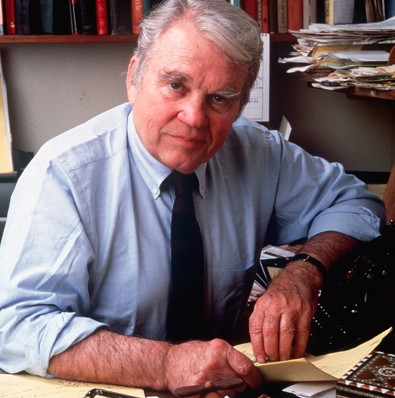 It was on this date, January 14, 1919, that Andrew Aitken Rooney, who grew up to be legendary CBS News commentator Andy Rooney, was born in Albany, New York. It seems Rooney was born to be a newsman. Rooney began writing for Stars and Stripes in London after he (a pacifist who opposed the war) was drafted into the Army in 1942, during World War II. He modified his opinion of the war after being one of the first Western journalists to witness a liberated Nazi concentration camp. He began with CBS Radio in 1949 as a writer for, and soon a friend of, Arthur Godfrey. He collaborated with Harry Reasoner, also a friend, on a number of news specials from 1962 to 1968. Rooney won his first Emmy for writing “Black History: Lost, Stolen, or Strayed” in 1968. His first appearance in front of the TV camera won him his third Writers Guild Award in 1971 for a World War II memoir entitled “An Essay on War” – which CBS declined to broadcast but PBS aired. His 1975 “Mr. Rooney Goes to Washington” won him a Peabody Award and, three years later, he debuted his most popular TV commentary series on the newsmagazine 60Minutes, offering a satirical take on everyday annoyances during “A Few Minutes with Andy Rooney.” This recurring feature continued up until just before his death, 33 years later.

As a wit, Rooney had the gift: “My wife’s from the Midwest. Very nice people there. Very wholesome. They use words like ‘Cripes.’ For Cripes sake! Who would that be—Jesus Cripes? Son of Gosh? Of the church of the Holy Moly? I’m not making fun of it—you think I want to burn in Heck?” Andy Rooney came out as an agnostic in his 1999 book, Sincerely, Andy Rooney, devoting a chapter, “Faith in Reason,” to explaining his religious doubts. Indeed, he sums up the 1990s by saying, “with all the problems throughout the world, religion has not really done anything to help.”

By 2004 Rooney was calling himself an atheist, saying in the 19 November 2004 edition of The Tufts [University] Daily, “I don’t understand religion at all. I’m sure I’ll offend a lot of people by saying this, but I think it’s all nonsense.” Thinking he was answering a fifth-grade student asking him if he believes in God, when in fact author Paul Rifkin was questioning a number of celebrities for his 1986 book The God Letters, Rooney replied, “No, of course I don’t and anyone who tells you that there is a god who makes his or her presence known to him or her is hallucinating or not telling the truth.”

In September 2008, Duncan Crary of Humanist News Network interviewed Rooney, asking about religion and politics in the 2008 election. Rooney observed—

Well, I’m not very vocal about [my atheism]. People don’t like it. I don’t think it makes me any more popular to say I’m an atheist. But, if the subject comes up, I have to be honest about it. And I am an atheist. … I think [presidential candidates talk about their faith] for the same reason they do everything else: to get votes. They think it’s the popular thing to do. If they said they were atheist, they’d lose a lot of votes. … I certainly think if they are atheist they should say so. Religion has gotten along amazingly well on very little and people do not inspect their faith much, as logically as they would other things in their life.*

Andy Rooney died an atheist on 4 November 2011, at the age of 92, less than five weeks after his last appearance on 60 Minutes.

* Thirteen years earlier, in a 1996 interview with TV Quarterly’s special correspondent Arthur Unger, Rooney said pretty much the same thing: “The only thing that I hide from people, that I have never said so far as being blunt and honest goes, is that I am not a religious person. I'm not sure the American public would accept from me that fact. I don't think that would please them or that it would attract a lot of people to me. And I take the position that it is sort of a personal matter, so I do not ever make an issue of it.” The year before that (May 1995), Rooney told ABC’s Sam Donaldson on “PrimeTime Live” that he is critical of anyone who claims to know whether or not a god exists.

About religion, Wright said, "I believe in God, only I spell it Nature… And, I prefer to say that nature is the only body of God that we shall ever see."