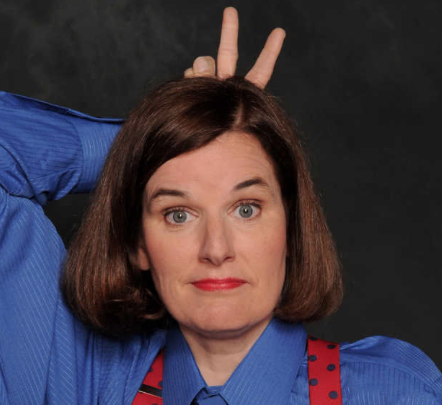 It was on this date, December 29, 1959, that American stand-up comedian and writer Paula Poundstone was born in Huntsville, Alabama, but grew up in Sudbury, Massachusetts, where she dropped out of high school to pursue show business. Now known for her trademark suits and ties, Poundstone started doing stand-up in Boston in 1979, then took her act to any club audience that would listen to her spontaneous, observational comedy across the country. Robin Williams liked her enough to bring her onto Saturday Night Live. By 1989 she had won the American Comedy Award for “Best Female Stand-Up Comic.” The next year, she wrote and starred in an HBO special called “Cats, Cops and Stuff,” becoming the first female to win the Cable ACE award for “Best Standup Comedy Special.” Her cable-TV specials brought her to national attention. Poundstone appeared variously on “The Tonight Show” (1992), ABC’s “Paula Poundstone Show” (1993), “The Rosie O’Donnell Show” (1996), as well as on “Hollywood Squares” and the remake of “To Tell the Truth.” Poundstone portrayed a recurring character in Cybil Shepherd's “Cybill” TV series (2007). Since 2003, Paula Poundstone has been a regular panelist on the NPR and Chicago Public Radio news/quiz show, “Wait Wait... Don't Tell Me!”

In the May/June 1994 issue of Mother Jones, Poundstone wrote, “There is no God. At least, I’m practically certain there isn’t. I don’t believe there’s a heaven or a hell either.” In the Letters to Paula section of “Keeping My Mouth Shut” at the Mother Jones website (January/September 1994), a correspondent asked, “I assume you are a Jewish liberal, like myself. Do you have any opinions about why Jews tend to be more liberal as a whole?” Poundstone replied, “I am quite flattered that you view me as a liberal Jew like yourself. Although raised a conservative Methodist, I am, in fact, a liberal atheist. Many people mistake me for Irish.” In her 1996 HBO special, “Paula Poundstone Goes To Harvard,” the comedian says that she “didn’t believe in anything” about religion and makes a few religious jokes. Asked how long the Flood lasted in the biblical story of Noah’s Ark while appearing in a 1999 broadcast of “Hollywood Squares,” Poundstone quipped, “I don't know I am an atheist!” That same year (1999), during an E! Entertainment special on religion in Hollywood, Poundstone stood out from most of the unconventionally “spiritual” others by saying, “I’m an atheist, so I don’t really know where spirituality fits in for me . . . a devout atheist.”

Furthermore, in her 2006 book, There’s Nothing in This Book That I Meant to Say, Poundstone writes, “I’m an atheist. The good news about atheists is that we have no mandate to convert anyone. So you’ll never find me on your doorstep on a Saturday morning with a big smile, saying, ‘Just stopped by to tell you there is no word. I brought along this little blank book I was hoping you could take a look at.’” And in an 11 February 2011 “Q&A with Paula Poundstone” by Heather Svokos, Paula Poundstone says,

My family, we are atheists, and many times people have had the nerve to say to us, because this is a terrible thing to say to anybody, but they say it to me: “Where will your children get their moral guidance without religion?” And I quickly assure them that we have three seasons of “Lost in Space” on DVD [which, she says, “we use for moral and spiritual guidance.”]. So I believe we’re covered in that area.