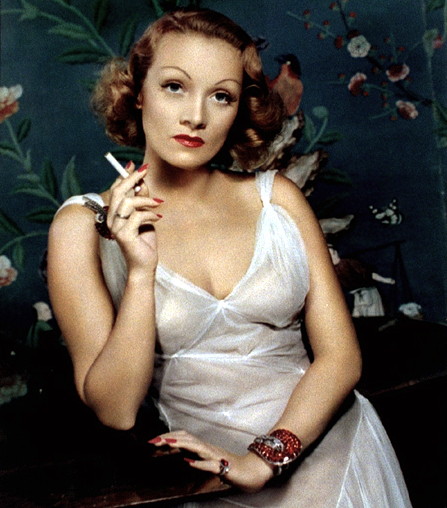 It was on this date, December 27, 1901, that German-American actress and singer Marlene Dietrich was born Marie Magdalene Dietrich in Schöneberg, now a district of Berlin, Germany. Nicknamed “Lena” by her family, around age 11 she contracted her two first names to become “Marlene.” Early on, she became a performer, working briefly as a pit violinist for silent films and as a vaudeville chorus girl. Leaping out of the pit, Dietrich took her first bit part, as Kathrin, a lady’s maid, in The Little Napoleon (Der kleine Napoleon, 1923), met her future husband, Rudolf Sieber, on the set of another film she made that year, and continued to work on stage and in film through the 1920s. Her breakthrough film role was as Lola-Lola in The Blue Angel (Der Blaue Engel, 1930), which also introduced Dietrich’s signature song, “Falling in Love Again.” She starred in Morocco (1930), directed by Josef von Sternberg, their second collaboration and Dietrich’s first American film, which earned the actress her only Oscar nomination. Dietrich would star in several more Sternberg films from 1930-1935, in which he cultivated her persona as a femme fatale: Dishonored (1931), Blonde Venus (1932), Shanghai Express (1932), The Scarlet Empress (about Catherine the Great of Russia, 1934) and The Devil Is a Woman (1935). She finished out the 1930s with The Garden of Allah (for producer David O. Selznick, 1936) and Knight Without Armour (1937), becoming the best-paid actress in film.

It was also in 1937 that Dietrich applied for U.S. citizenship, saying “The Germans and I no longer speak the same language,” and attaining it in 1939. She continued to star in films through the 1940s and became one of the first performers to raise war bonds after the U.S. entered World War II in 1941. She performed in two USO tours, 1944 and 1945, for Allied troops on the front lines in Algeria, Italy, Britain, France and Germany. “There’s something about an American soldier you can’t explain,” Dietrich said. “They’re so grateful for anything, even a film actress coming to see them.” Although reared in the German Lutheran church, Marlene Dietrich lost her faith during her time as a USO entertainer, saying, “I lost my faith during the war and can't believe they are all up there, flying around or sitting at tables, all those I've lost.” She went on in her autobiography—

Back in my early childhood I learnt that God doesn’t fight on any army’s side. So there was little point in praying. Nonetheless, before every battle, prayers were read, all kinds of incantations were incited, staged by all sorts of preachers. We attended these ceremonies and I saw how all the soldiers stood in place, as though they couldn’t believe their ears. I couldn’t believe it either, but I counted for nothing… Since then, I have given up belief in God, in a ‘light’ that leads us, or anything of that sort. Goethe said, if God created this world, he should review his plan.

For her war work, Dietrich was awarded the Medal of Freedom by the U.S. in 1945 and the Légion d’honneur by France. She performed in few films in the 1950s, but continued performing live onstage until 1975. Her final film role, in which she sang the title song, was Just a Gigolo (1979). Thereafter, she disappeared into her Paris apartment until her death on 7 May 1992 at the age of 90. Despite Dietrich being an atheist for the last 50 years of her life – “When you’re dead, you’re dead. That’s it,” she once said, discounting belief in a future life – her family arranged a funeral ceremony at La Madeleine in Paris, a Roman Catholic church. A wreath of flowers was provided by French President François Mitterand, an atheist. Attempting further to save her legacy from the fires of hell, daughter Maria Riva claimed her mother always traveled with a satchel containing many religious medallions, showing her desire to keep her faith – although it was Dietrich herself who said, “Superstitions are habits rather than beliefs.” It is also claimed that Dietrich, during her last 11 reclusive years in Paris, converted to Roman Catholicism, although this is thinly corroborated. Even if true, it must be explained how a deathbed conversion is salutary to the legacy of the great film and stage star: Marlene Dietrich lived an atheist, but if she only died a Catholic, maybe God really should review his plan!